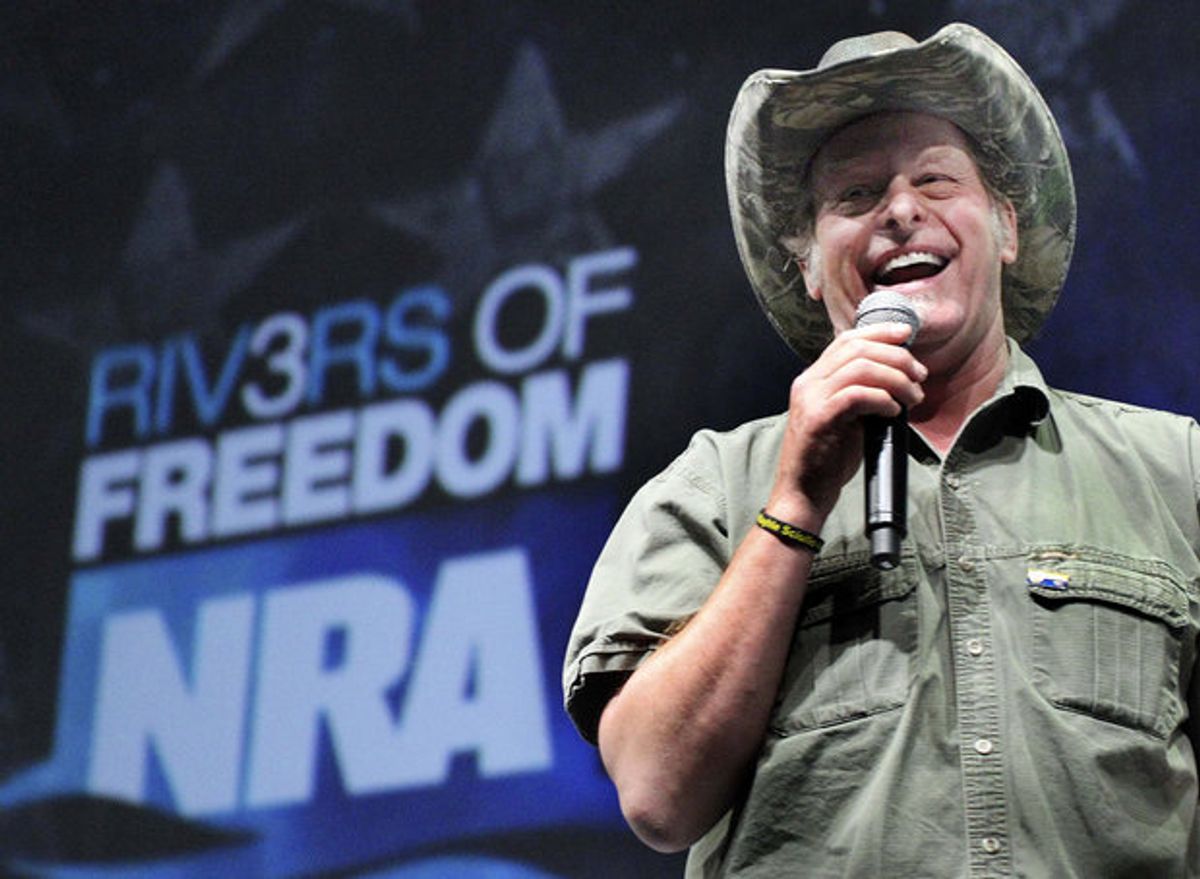 In a speech billed as “Ted Nugent: 2016 Election Do or Die for America and Freedom” at the NRA’s annual meeting at  Freedom Hall in Louisville, Kentucky, the NRA board member who was just re-elected to another 3-year term last week, championed presumptive Republican nominee Donald Trump as the perfect man to "stop the Islamification of America" and protect gun owners.

"Donald Trump, when he said ban Muslims, I gotta tell you if there was a rash of dog bites in my neighborhood, and everyone one of them was by Dalmations, I would ban spotted dogs," Nugent said of Trump's unconstitutional proposal to temporarily ban all Muslims from entering the United States. The ban is necessary "for the safety of the community and the safety of the nation," Nugent explained to the crowd inside Freedom Hall, a gun-free zone.

Nugent, whom the NRA announcer introducing him called "the thinking man's Abraham Lincoln," then proceeded to tear into both Hillary Clinton and her Democratic rival, Sanders, in a profanity-laced, rambling hour-long rant:

We better elect him. Don't give me this, 'He's not your favorite guy crap.' You don't deny your dying child life-saving medicine because you don't like the captain and his boat. You get on the damn boat, and you get the medicine for the child and then you fix the captain. So you can elect him and then stay on him."

"By November let's get this by a landslide. Let's send a message to the Hillaries, and the Obamas, and the Lynches, and Bernie Sanders that this is America. It's based on being the best that you can be.

"Hey Bernie: Eat shit and die,” Nugent then shouted, according to the Washington Times.

“[Put] that on MSNBC!” Nugent told the crowd, adding that he likes to "p**s off Rachel Maddow."

Of course, Nugent didn't hold his fire on Clinton, telling the gathered NRA members that "Hillary Clinton wants to disarm you. Most innocent lives are slaughtered in gun-free zones. They know. And they want more of them."

Here are more of Nugent's unhinged rantings on NRA members having to police the streets with their guns because President Obama's minimal criminal justice reform has released swarms of violent offenders, or some indecipherably nonsense:

Rapists, murderers, child molesters, ‘knockout’ game monsters walk the streets with us. But instead of just keeping devils in cages, our failed anti-justice system has freed them into our communities, and now [with] Barack Obama, now there’s tens of thousands of more.

And so that’s why law enforcement has to err on the side of caution, knowing that our judges and our prosecutors and our states’ attorneys and mostly the U.S. attorneys — they have freed monsters among us.

That’s who the Secret Service is protecting Donald Trump and the other candidates from. They’re not protecting ‘em from NRA members.

If we would keep rapists and murderers and ‘knockout’ gamers and carjackers in cages forever, no one would have to protect anybody from anybody. Everybody knows — everybody knows — that sex crimes, [molesting] is a 100 percent recidivistic crime. Everybody knows that, and our system lets them out.

Shoot them and kill them. Since they won’t control them, we shall.