It's bigger than Kim Davis: What makes "sincerely held religious beliefs" so special? 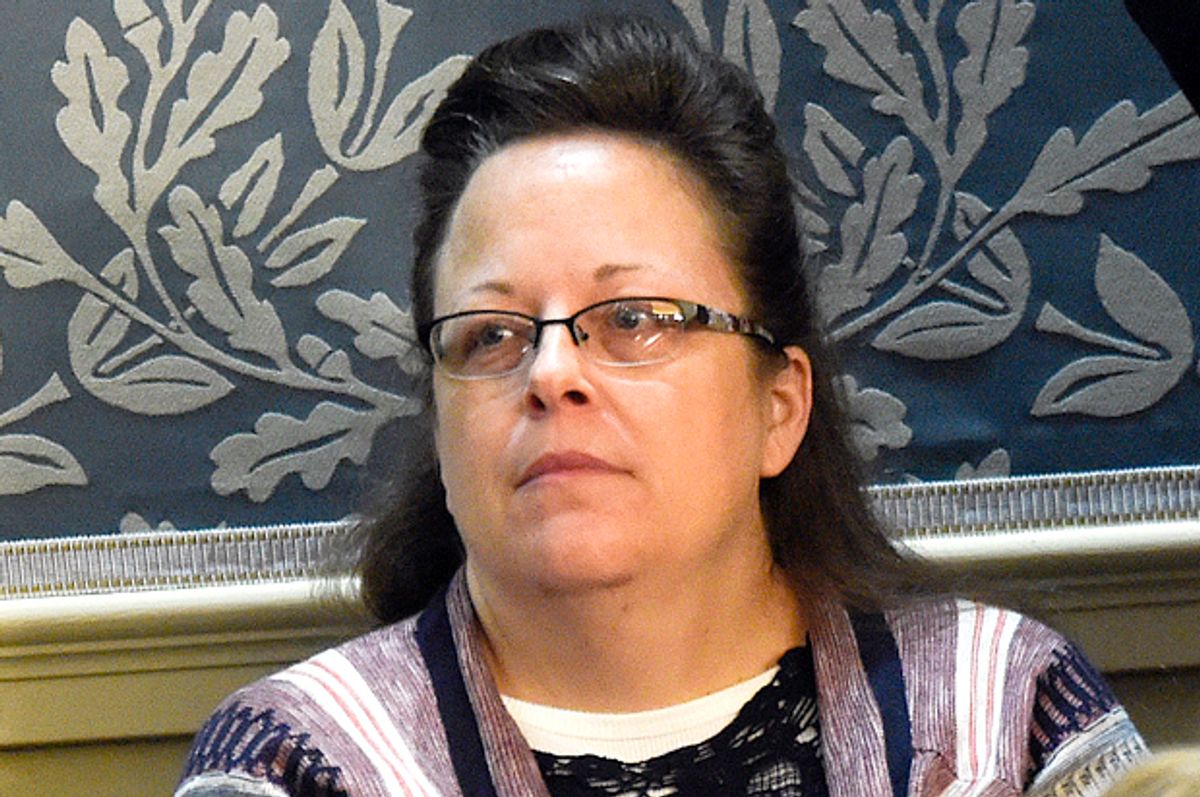 A bill introduced in the Oklahoma state senate on Thursday says a student with a “sincerely held religious belief” can force his or her school to provide restrooms “designated for the exclusive use of that student's sex” (“as identified at birth by that individual's anatomy”).

In other words, if your school follows the Obama administration’s directive to allow children to use the bathroom that matches their gender identity, you can make it also offer bathrooms exclusively for people who were born with your same genitalia.

This would seem to follow Oklahoma’s recent trend of introducing bills that are not so much useful legislation as cries of dismay at losing the culture wars.

To me, these laws are patently unfair. I’m not a religious person. Why don't my irrational, fear-based prejudices count?

Why do religious bigots get a free pass and not me?

“I refuse to follow the law of the land.”

“OK, well, then you might get arrested, fined, or sued. If your job is to execute the law, you’re obviously going to need a different job.”

“But I have this book written a certain time ago, and given how I and some other people interpret this book, I believe the law is wrong.”

“Oh, well, that’s different. We can’t argue with that.”

Perhaps “religious belief” gets its special heft from doctrinal rigidity. I can change my mind at will, after all; I don’t have to check with my pastor or consult an ancient text or ask God Himself. By contrast, someone with religious beliefs that conflict with the law is in a bind: What can she do but shrug and point sorrowfully to a piece of scripture she is helpless to contravene? The marriage equality law is the rock; Leviticus 18:22 is the hard place.

Except . . . for most religious people, scripture is much squishier than that. Most ignore inconvenient, outdated, and/or morally suspect passages. Plenty of people consider “Do not have sexual relations with a man as one does with a woman; that is detestable” to be God’s incontrovertible word would likely raise an eyebrow at Leviticus 19:19: “Do not wear clothing woven of two kinds of material.”

Religious laws are simply not the last word for almost anyone but about 14 people that you definitely would not want to meet. They’re not even the last word for religions. Just last year, the General Convention of the U.S. Episcopal Church made “canonical and liturgical changes to provide marriage equality for all Episcopalians.” Pope Francis changed the rules for annulment and even declared that abortion, although still a sin, was (at least temporarily) a forgivable one. Last month he said priests should use their own judgment when dealing with the divorced and remarried in their flock.

Individuals pick and choose among religious beliefs; religious institutions continually reinterpret and rewrite them. But if they’re not mandatory and/or immutable—if they are subject to one’s own internal morality or a vote by a House of Bishops—then how are they different from mine?

Maybe people consider religious beliefs to be more deeply held than secular ones. A “religious person” isn’t just someone who calls himself Christian; he’s serious enough about his beliefs to organize his life around them. We even use the word religious to describe a state of utter commitment: he watches “Game of Thrones” religiously; she’s religious about watering her ficus.

Since not everyone is religious about his or her religion, many RFRAs weed out the half-hearted by specifying “sincerely held religious beliefs.” In New York, at least, this is no legislative boilerplate: The state sincerely reserves the right to call bullshit. Denied an exemption from vaccinating her child based on “sincere and genuine religious beliefs” [(New York Pub. Health law 2164(9)], Dina Check took the Department of Education to court, where she lost because, “On cross‐examination, Check testified that she did not know of any tenets of Catholicism that prohibited vaccinations.” Homework, Dina!

But let’s say that Dina had checked and found some biblical or liturgical reason to put other school children at risk. Some sincerely held religious belief “measured-in-millenia,”as Davis’s lawyers misspelled it. Why is that more valid than a sincere and genuine belief in whatever Jenny McCarthy says?

It isn’t. And that’s why Mississippi’s HB 1523, set to take effect July 1, is actually a breath of fresh air. You may have heard of this one—the ACLU just brought suit because of it. But it doesn’t discriminate against non-believers: it includes “moral convictions” along with religious beliefs in its protections, meaning I don’t need the institutional backing of religion to have the state come to my defense. It gives me exactly the same rights as religious people, provided that my “moral convictions” include the following:

If, on the other hand, my moral convictions lead me to deny “services, accommodations, facilities, goods or privileges” to, say, homophobic lawmakers trying to impose their beliefs on others, I guess I’m on my own.