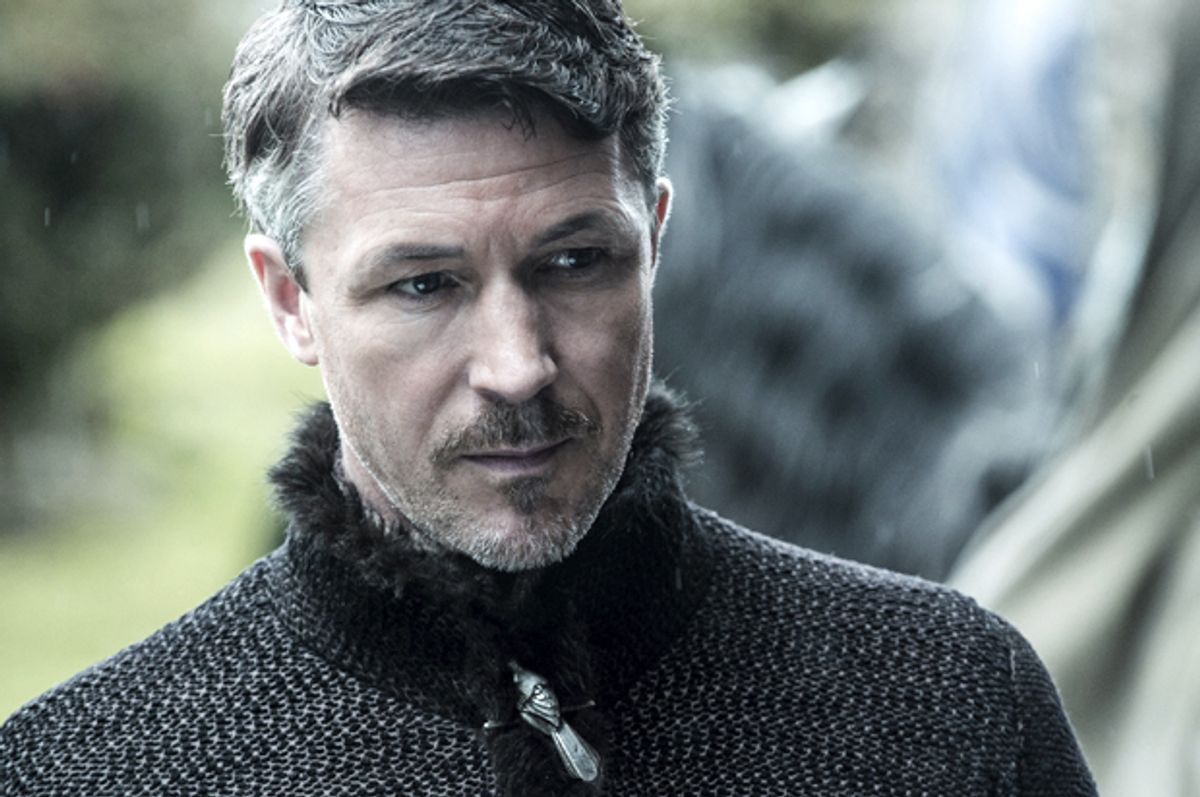 Last night’s episode of “Game Of Thrones” began with one of the most tense stand-offs in the show’s history, as Petyr Baelish, better known as Littlefinger, showed up at Castle Black to offer his aid to his former ward, Sansa Stark, who has been through hell and high water since he last saw her. Occasionally in this show, we’ve gotten the sweet satisfaction of seeing poetic justice—Tyrion sending a crossbow bold through his father’s bowels, Daenerys standing over Viserys’ dead body, Joffrey keeling over in the midst of one of his most monstrous tantrums ever. But most of the time, the characters of “Game Of Thrones” do not get the opportunity to face their betrayers—death or permanent estrangement is much more likely. Arya’s long list of men and women she wished to punish with her Needle dwindled less because she killed them and more because the rest of the world got to them first.

So seeing Sansa face Littlefinger was a special, bittersweet kind of joy. Ever since Littlefinger abducted Sansa—and made it sound like a rescue—I have been waiting for Sansa to use her considerable willpower to destroy him. Over the past two seasons, Littlefinger has groomed her into both his pawn and his partner, capitalizing on her vulnerability and fear to twist her into a special sort of bargaining chip. This is confirmed when, in the show’s timeline, he sells her in marriage to Roose Bolton’s bastard son Ramsay, a fledgling murderous sadist with way too much time on his hands.

Some backstory: The show, and books, have long established that his youthful inability to woo Catelyn Stark ended up becoming the most potent symbol of a lifelong sense of inadequacy. When Sansa, who is said to resemble her mother at that age, came to his attention, his behavior towards her was clearly affected by this history. That Sansa could need him—could even need exclusively him—seemed to warm the cockles of Littlefinger’s sad cold heart. His behavior towards her has veered somewhere between paternalistic and romantic, often operating under both modes at the same time. It was creepy, but the upshot was that while Sansa was sequestered, she wasn’t harmed, either. Whatever Littlefinger’s obsession with her is, it’s not one that is expressed with rape or brutality. Instead, he alternated between isolating, coddling, and educating his charge.

Until he takes her to Winterfell. As Sansa says to Littlefinger, when she meets him in the relative cover of Mole’s Town: He’s either an idiot or a liar if he didn’t know what Ramsay was when he handed her over. Petyr Baelish is not in the habit of not knowing things; indeed, he’s sought out Sansa in part to tell her something he does know, which is that her uncle the Blackfish has regrouped in the Riverlands with a contingent of soldiers. Sure, this might be a lie, but the point is, Littlefinger’s whole thing is that he purports to know other things. He trades in information and secrets.

So, making the safe assumption that Littlefinger knew about Ramsay, he must have been trying to punish her or hurt Sansa, by handing her over to Westeros’ most hateful lordling. He handed her off to a brute, and the brute brutalized her; so far, everything is going as planned.

Which then leads me to wonder: Why on earth did Littlefinger come back to her? What possesses a person to both send someone to definite rape and torture and then show up as if nothing has changed? Is he under the delusion that she would welcome him, or does he want to provoke her?

The more I thought about it last night, rewatching the first scene of “The Door,” the less and less sense the conversation made. And it explained how unsatisfying I found this long-awaited interaction. I don’t really know what the show wants me to feel about Sansa and Littlefinger, and though Sophie Turner tolerably delivered icy disdain for Littlefinger, mingled with anger and lingering affection, Aidan Gillen did little more than just mirror her own resentments. It’s not because he’s not a great actor himself. It’s because there is not really any internal logic to the character he’s currently performing. The man who knows everything either underestimated Ramsay Bolton—unlikely—or even more severely underestimated how Sansa Stark would react to being sold into marriage with a sadist. What is happening here? What could he possibly hope to gain from this conversation?

Sometimes, in narratives, when a person is doing something completely incomprehensible, it is easiest to conclude that they are moved by some great emotion. Jorah came back to the queen who banished him because he was in love with her; Ygritte tried to kill Jon Snow because she didn’t want to reveal how much he’d broken her heart. I fear that “love,” as a blanket statement, is how the show is explaining what Littlefinger has done to Sansa. But a single word does not really explain the depths of what has transpired between the two. I can imagine that Littlefinger is a little in love with Sansa, but I would have to believe that he hates her, too. One does not control and brainwash a person they love; that is not how it works.

Whatever is happening with him, it did not come through in last night’s episode. There are some possible explanations for what he thought might happen when he showed up in Mole’s Town, but they require some mental stretching. Maybe he thought Sansa would have been so mistreated that even he would be a welcome face, his culpability in her plight forgotten. Maybe he thought that she knew what she was getting into, and should have been able to handle Ramsay’s behavior. Maybe he came back just so Sansa could yell at him—could berate him, with her righteous indignation, for so betraying her. He can’t even bring himself to say the word “rape,” when Sansa asks him to list what he thinks has been done to her. I think what he is expressing is shame.

This last is the weirdest explanation, but it’s also the only one that makes any sense to me. For a man who so nurses his wounds, this might be the only thing that he can feel anymore—humiliation, just like it was when he was a child. Maybe he thinks that by putting Sansa through hell, he will be preparing her or hardening her for the cruel world outside his power. But surely he must realize that the first person she’ll want to destroy, once she’s empowered to do so, is Littlefinger himself?