"Preacher" fans, your prayers are answered: Here are 10 comics with outrageous portrayals of God

If the premiere of the new AMC religious satire thrills you, check out 9 more entertaining, blasphemous titles 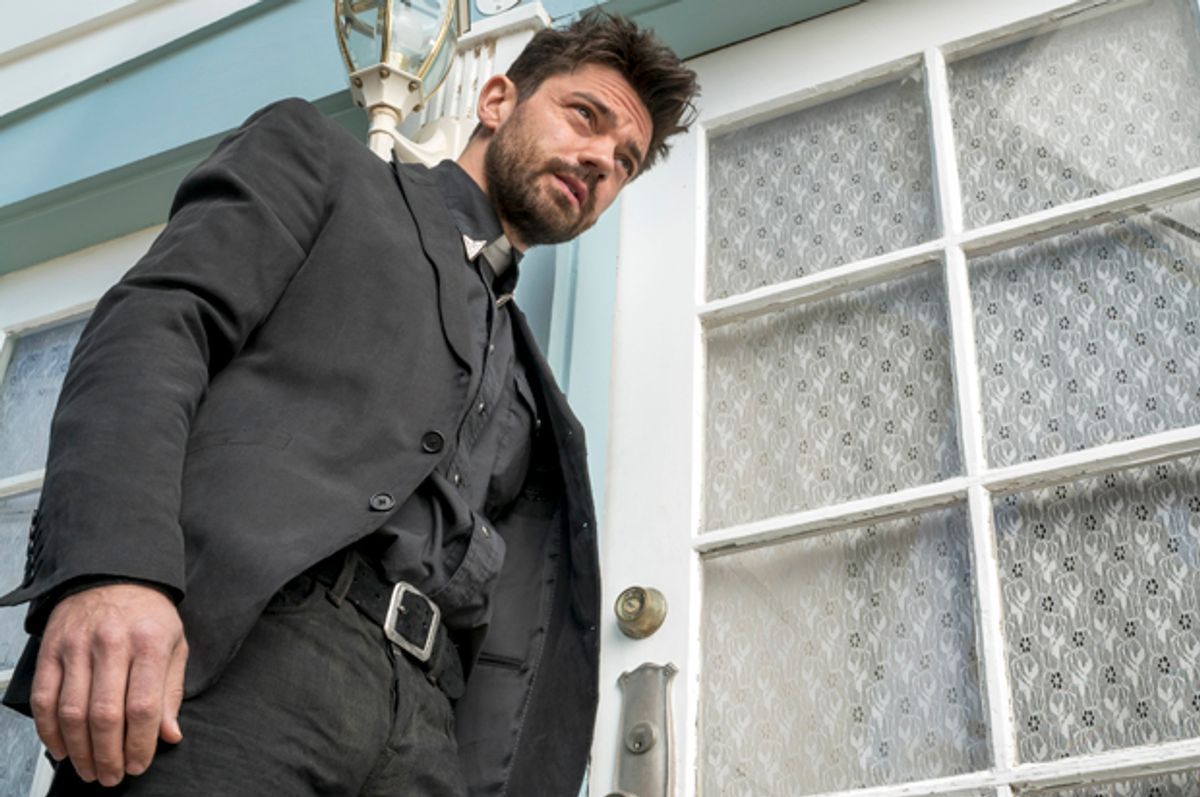 The comic book “Preacher”—now an AMC series, which made its debut last night—is one of the most brutal religious satires in any medium. Among many sacrileges is the portrayal of God himself: as a deadbeat dad of sorts who has abandoned his creation and fears Genesis, a powerful force that is the offspring of an angel and a demon. Much of the comic, and presumably the series, is about bringing God to justice.

But this is only one of many extreme portrayals of God or a God-like creator in the wild history of comic books. Here’s a look at some other four-color blasphemies.

In issue #6, writer/artist David Lapham’s recurring protagonist and fugitive Amy Racecar has a conversation with God as a young girl after her father dies. God—a vaguely creepy-looking guy with a goatee—denies any responsibility for taking Amy’s daddy, since he’s a “strictly hands-off” deity. Oh, and by the way, says the Lord, your daddy didn’t go to heaven, because nobody does: everyone just becomes nothing. After receiving that cheery message, Amy faked a coma for three years, then later became a famous bandit and bigamist. Wouldn’t you?

Writer Robert Kirkman has a reputation for being a bit self-serious: “The Walking Dead” is bleak as hell, and his superhero series “Invincible” sometimes falls into the “dark for dark’s sake” trap. But if you want proof that Kirkman has a sense of humor and can write comedy, just check out “Battlepope,” a deliciously absurd comic about a brawny, ass-kicking, cigar-chomping Pope and his spunky, gun-toting sidekick Jesus. In this world, Popes are trained by Bruce Lee and routinely get their ass kicked by former Popes. God is an important character: he brings on Judgement Day, condemning the world to violent chaos and a demon invasion. After the Pope dies in a battle with a demon, God offers him a deal: go back to Earth as Battlepope to rescue St. Michael from Lucifer. If Battlepope succeeds, he gets to go to heaven—which was not happening otherwise, since he was pretty much the Bill Clinton of Popes.

Warren Ellis’ writing—in series like “Injection” and “Planetary”—is full of more ideas in a single issue than most comics have in a 50-issue run. In “The Authority,” Ellis concluded his run with a huge idea: that Earth was created by a massive organism that left millions of years ago and now returned, appalled at the existence of humanity. “God”—for lack of a better name—then tries, as one character puts it, “to wipe this annoying six-billion-strong infection off the face of the planet.” So the Authority—a team much cooler than the Avengers or Justice League—take their universe-surfing shiftship inside the body of God, who they kill. As mystical hero the Doctor says, with admiration and fear, “Only Jenny Sparks could finish a fight by executing God U.S. execution style.”

This recent Image series—written by Grant Morrison and illustrated by Chris Burnham—was a startlingly original sci-fi horror comic about a doomsday asteroid hurtling toward Earth and an alien force possessing and destroying human minds. It also turned out to be about God, who is—hold onto your Bible—“a deranged prisoner of war from another universe.” This at first unnamed entity is described as “a disembodied alien lifeform living among us” who “boasts of its own omnipotence,” hands down rules, then promises to “punish every preordained breach of those rules however brief or minor—with eternal, agonizing torture in a cosmic concentration camp.” Sound familiar?

Though often compared to Jesus, Superman took on a more overtly God-like role in this series by Morrison and Frank Quitely. In this terrific series, which celebrates the history and quirkiness of Superman, the Man of Steel is dying of cancer. Superman—in typical fashion, unless Zack Snyder is involved—is most worried about how his death will affect others. So he creates a new universe in his Fortress of Solitude—Earth Q, Over the course of issue 10, we see Earth Q develop language, culture, and civilization. Eventually, we see Joe Shuster creating Superman, proving that even on a world without a Superman, people still need Superman. For all-powerful creators, we could do a lot worse.

The title of this series gives away the inciting incident, but it doesn’t tell half the chaos that awaits when Odin, Zeus, Quetzcoatl, and other out-of-date deities try to reclaim their territory. As writer Jonathan Hickman said in a 2013 interview with Newsarama, the story was meant to answer a question: “What would all the mythological gods do if they were both real and returned to earth? I thought it would be hilarious if the first thing they did was re-educate the atheists, and then the book would descend into the death of logic, deity cage matches in the seven ancient wonders of the world, and other nonsense.” If that sounds like your kind of nonsense, this is a must-read.

As legend has it, Stan Lee and Jack Kirby invented Galactus in 1966 as an answer to this question: “What if the Fantastic Four met God?” The letter G aside, Galactus isn’t actually very God-like, unless I missed a class in Catholic school where it was revealed that God is a purple giant who eats planets and has antlers. But Galactus and God have never been closer than in the current run of “The Ultimates,” in which a diverse team of Marvel heroes attempts to solve the big issues, including the everpresent threat of Galactus making Earth a snack. The Ultimates figured out that when Galactus was created at the beginning of the current universe, he wasn’t done cooking, so they find his gestation-majig and toss him back inside. Lo and behold, Galactus now gives life to planets instead of taking it away. Can I get a cosmic amen?

When Kirby left Marvel in the early seventies, frustrated at receiving insufficient credit for co-crediting the Marvel Universe, he created a brand universe: the Fourth World, which included the New Gods, who were only the tip of the godberg. The Fourth World included the planets New Genesis and Apokolips, the fascist monster Darkseid, and the Source—a powerful, mysterious, cosmic force that many people think was an inspiration for the force in Star Wars. The Source is embodied in the Source Wall, a massive structure that trapped anyone who tried to pass it. As the name suggests, everything comes from the Source. Kirby had a talent for creating deities and pantheons, but the Source might be his best attempt at representing the ineffable.

This new series by writer Jason Aaron and artist R. M. Guéra might be the most blasphemous (and, in a way, faithful) of the bunch. The story takes place 1600 years after the fall of Eden, following the depressing, grim life of Cain, who gets this movie-poster billing: “The man who invented murder. The man who cannot die.” Cain is cursed by God to keep living, though he is constantly trying to die by throwing himself in volcanoes, jumping off cliffs, and volunteering to be lunch for a leviathan. This series’ overall attitude toward the Lord is summed up by Cain, who was asked why he has no scars, unlike everyone else in the pre-flood wasteland: “’Cause God’s a fucking asshole, that’s why.”