Seth Rogen and Evan Goldberg have a winner—but boy does it have fun with shooting, stabbing and exploding bodies 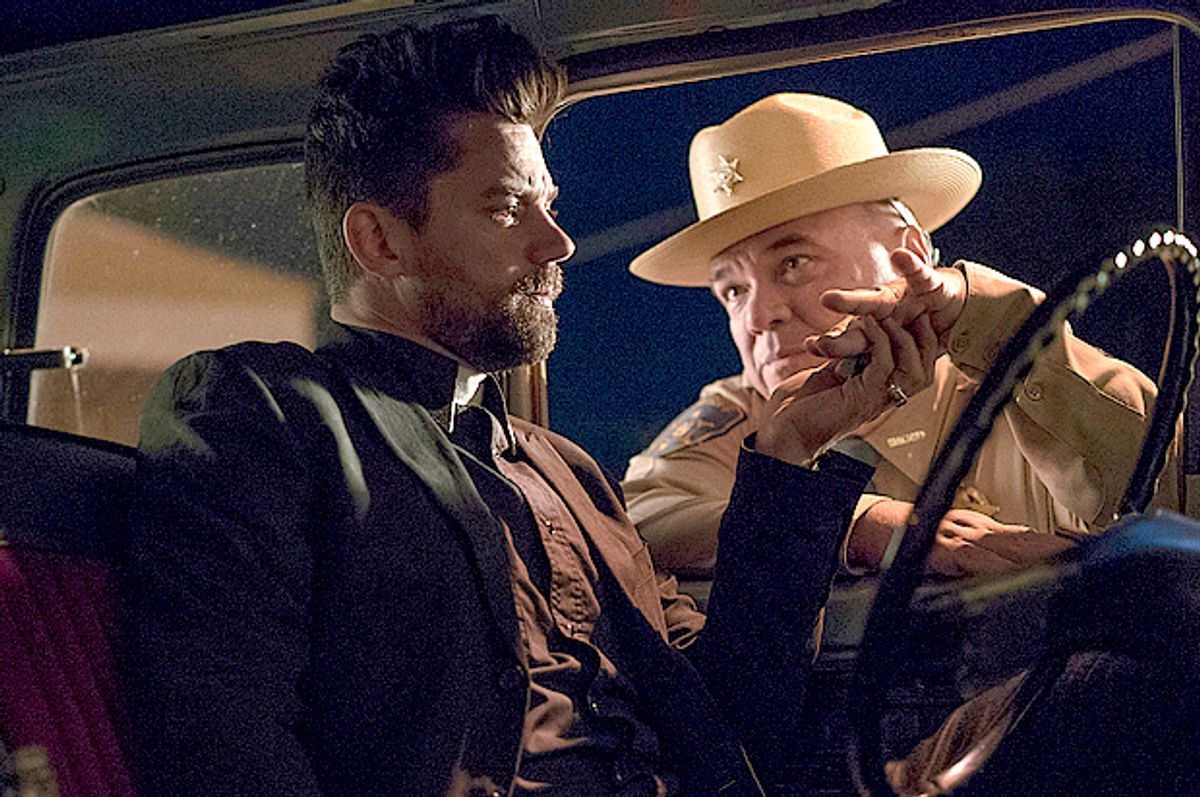 Even after just one episode, a few things are clear about “Preacher,” AMC’s new show set in a fictional Texas town. It will be a popular and critical success, and mostly deserves to be. With strong acting, ample humor (some of it coming from a motor-mouthed Irish vampire), a handsome look, and crisp plotting, it’s the kind of series you don’t want to take your eyes off of. Its musical choices (Willie Nelson’s “Time of the Preacher,” Johnny Cash’s version of “The Beast in Me,” Carly Simon’s “You’re So Vain”) are perfect, its level of irreverence perfect for the cable audience. AMC needs another show with serious ratings, and while it’s too soon to tell how this one will do, “Preacher” could be just what the network needs as it looks for a way to generate “Walking Dead”-size numbers.

“Preacher,” based on a cult comic book from the ‘90s, shows the title character, played with brooding restraint by Dominic Cooper, returning to his hometown to take up his calling again. His ex-girlfriend, Tulip, winds her way there after blowing a helicopter out of the sky with a homemade bazooka. The vampire, Cassidy, arrives after killing a whole plane full of people. All of this – including a striking scene in which Tulip’s car weaves through a cornfield – is strikingly choreographed.

But the show is not only graphically violent – a step beyond “Breaking Bad” and zombie-show levels – it’s gleefully violent. You can admire the show and its influences -- a mix of Quentin Tarantino, Coen Brothers, and spaghetti westerns – and wonder if it really needs to say, basically, that killing and maiming is so much fun.

We can’t say we weren’t warned: At the very beginning of the opening episode, an unexplained force from the heavens comes to earth, slamming into an African minister and causing him to explode in a show of blood and guts. There will be a lot like this as the episode goes on.

“I don’t think there’s a line the show won’t cross,” Cooper told TheWrap. “What’s great about the first episode is you establish what your three main characters are capable of in these three fight scenes…But [the producers] don’t hold back at all from the violence. They want this to be as true to the comics as possible.”

Every adapted television show faces this question, usually months before it airs: How close is it to its source material? Will it turn off its original fans? Comic book fans tend to be even more possessive and literal than lovers of novels or plays. But there’s an important difference: The technological nature of television in the 21st century means that a television show can be way more graphic than pen-and-ink, if it wants to be. And “Preacher” clearly wants to. And despite the comic-roots' horror, the show was developed by comedy writing duo Evan Goldberg and Seth Rogen, giving it a strangely gleeful take on violence.

Is there no line the show won’t cross? Apparently there is! “I originally scripted her as biting off the guy’s nose,” showrunner Sam Catlin told the LA Times about that fight that introduces Tulip. “And Seth and Evan said, ‘No, no, no, we did that before. It was too disgusting. It has to be an ear.’ Because for some reason the ear is less disturbing than the nose. And I think they were right.”

Remember when cutting off the cop’s ear in “Reservoir Dogs” was considered shocking, and hard to watch? Now it’s practically a non-violent compromise, and entirely played for laughs.

All of this would be fine if violence weren’t still a fairly serious problem in the actual world. Today’s New York Times has a story about the real impact gun violence has on lives. Everyone who laughed at the killing in “Preacher” should read “Unending but Unheard, The Echo of Gun Violence,” about the 358 mass shootings in 2015.

The relationship between onscreen and real-world violence has never been solidly documented, but how can we laugh so hard at the former if we take the latter seriously? It’s not that television shows need to be sober and cautionary all the time: “Preacher,” like every other series, is entertainment. But by the close of episode one, there has been so much bloodshed, so much gore, and so much fun has been had with it all, it makes you wonder what it will have to do to shock us the next time.