Trump didn't make Miss Universe degrading: Beauty pageants have been harmful to women since they began

Much has been made of Trump's creepy attitudes toward women, but he's not the only one with a Miss Universe problem 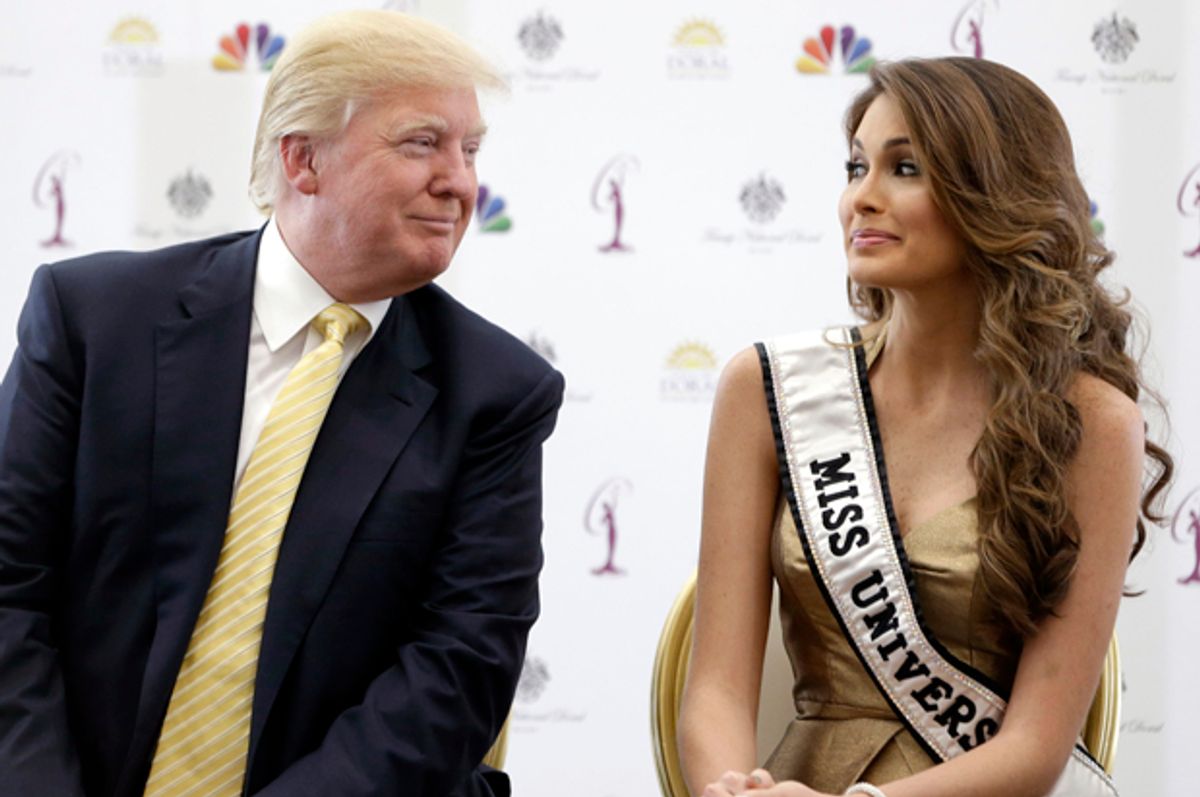 A May 14 New York Times profile of Donald Trump, which explores his past interactions with women, were hardly revelatory to anyone who's been paying attention. The anecdotes it contains are entirely in line with his public conduct, particularly when it comes to the appearance of women who happen to cross his path. Trump often justifies his cruel remarks on the grounds that women “attacked him” or, in Trump-speak, said “nasty things” about him first, such as when Times opinion writer Gail Collins referred to him as a “financially embattled thousandaire.” Trump responded by mailing Collins a copy of her own column with her picture circled and “The Face of a Dog!” scrawled upon it.

But often, in Trump's world, women provoke such attacks simply because their appearance changes over time. The Times notes that Trump takes pride in surrounding himself with beautiful women in his personal and professional life, and pulls no punches when, in his view, they don't live up to their end of the bargain. When construction executive Barbara Res, who Trump hired, gained weight over a period of years, he remarked, in the workplace, “You like your candy.” Yet the story that's been garnering the most coverage involves the 1996 winner of the Miss Universe pageant, the first woman to hold the title after Trump took over the pageant. When Alicia Machado began to gain weight, Trump paraded what was supposed to be a private training session in front of the media with, according to Machado, no prior warning and against her wishes. “I was about to cry in that moment with all the cameras there,” Machado says, “I said, 'I don’t want to do this, Mr. Trump.' He said, 'I don’t care.'”

The Times piece has led to searing indictments of not just Trump, but a complicit media that happily took part in, and profited off of, the humiliation of a woman who was only a teenager when she won her crown. The implication is that the cruel behavior was particularly egregious, and certainly outside the scope of what we consider acceptably objectifying and demeaning treatment of women twenty years later. The incident certainly reveals a disgusting degree of callousness which reflects especially poorly on Trump, but is also emblematic of broader problems with pageant culture generally, and the Miss Universe competition in particular.

Miss USA, the competition which determines the American entrant to the Miss Universe competition, was founded upon the premise that the Miss America beauty pageant wasn't shallow enough, and gave its winners too much power over their own portrayal. Miss USA began when Miss America 1951 refused to publicly pose for photographs wearing a swimsuit, prompting one company to pull its sponsorship and launch its own rival competition instead. The pageant did away with the talent portion altogether, and 15 years ago revolutionized the “personality interview” question by having only the top five contestants bother answering it.

That the problems with this particular enterprise predate and extend beyond Trump does not, by any means, vindicate him. Instead, the fact that this pageant that attracted his interest should, like the details of the Times profile, come as no surprise. In many ways Miss USA is Miss America wrenched from her political correctness. Miss America, while less crass and more palatable, promotes similarly unattainable beauty standards and also elevates the importance of physical attractiveness as a woman's primary asset and aim. If anything, cluttering up the event with a talent and purportedly relevant interview portion only serves to promote even more misguided notions. It suggests that talent and the ability to communicate have no value for a woman beyond heightening her sex appeal (they do), or that the traits are somehow intertwined with or impossible to separate from her superficial allure (they are not.)

Still, much like Trump's, ahem, “candid” rhetoric makes the underlying racism and xenophobia of his campaign more dangerous, there is something especially despicable about Miss USA's abandonment of pretense. An unapologetically degrading pageant is more damaging than a disingenuously well-rounded one, and encourages similarly reductive views in not only its participants but the culture at large. That participants in these beauty pageants often use them as a springboard for their careers creates a gross path to celebrity, and suggests that women ought to be valued for their looks before they can be valued for anything else. Again, while this message harms contestants, it does infinitely more harm to the women it walls off from similar opportunities.

Machado suffered from years of depression and disordered eating after Trump's gym stunt. (“For sure he is not a good person,” she's said, laughing when asked if he'll win her vote in November.) But the values imparted by beauty pageants that are broadcast into millions of homes are no less harmful to the women and men who watch them. Facing calls for greater diversity and more three-dimensional female characters on screen, at a time when television, as an industry, is engaging in long-overdue self-reflection about its portrayal of women, it is absurd that companies like NBC and Univision only severed ties with Miss USA amidst outcry surrounding Trump's racist remarks. Networks that broadcast beauty pageants and public figures, especially journalists, who endorse their values should reconsider their affiliation not with Trump, but with such blatantly sexist and reductive events. Hopefully it won't take the rest of us 20 years to hold them accountable.