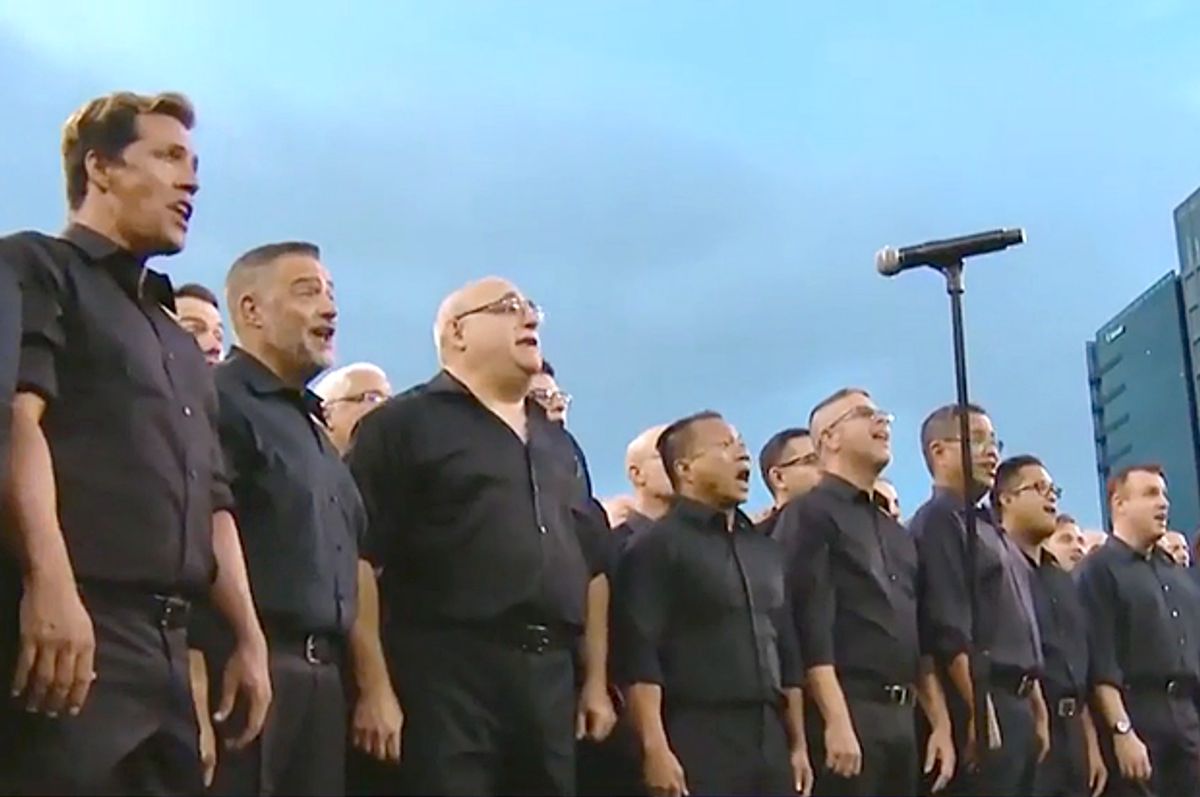 Saturday should have been a celebratory evening for San Diego’s queer community. As part of the team’s recent push for greater LGBT inclusion, the Padres invited the local gay men’s chorus to sing the national anthem during its evening game. Last year, the team became one of the few in professional sports to host an official LGBT night for fans—although the Padres have held an “unofficial” version since 2001. Fifteen years ago, they were one of the first sports teams to do so.

The Saturday game, however, was marred by a controversy as shameful as it is unnecessary: As OutSports reports, “the control room… played a track of a woman singing the National Anthem as a few dozen gay men stood speechless on the field.” It was a national disgrace.

Following the incident, critics have pointed the finger at homophobia to explain how such a thing could have occurred. Jason Collins, the first openly gay man to play in the NBA, alleged that it was yet another case of “deliberate” anti-gay bigotry in baseball. Cyd Zeigler, the editor of OutSports, however, claims that it’s unlikely that the occurrence was a product of a “homophobic conspiracy.” His investigation concluded that it was merely a “disastrous, yet unintentional, mistake.”

In fact, Zeigler cited a similar incident in which pre-recorded vocals of a young woman singing the national anthem were played in place of the backing track. “The girl looked around, then stood there as her voice singing the anthem came over the speakers,” he writes. (Note: Zeigler does not state exactly when this incident occurred.)

But if the Padres fiasco “raises the specter of homophobia” for LGBT fans, it’s because they have a reason to expect the worst. Despite numerous milestones in recent years, professional sports continue to have a tortured relationship with the LGBT community, who remain marginalized, forced out of professional sports, and treated with contempt. Our country is making enormous strides when it comes to queer inclusion, but the major leagues remain stuck in the past.

The same year that Collins came out, Michael Sam became the first college football player selected by an NFL team during the annual draft. That historic moment, however, highlighted how far the major leagues have to go when it comes to embracing gay players. Sam’s sexuality was branded a “distraction,” putting a target on his back from the moment he was drafted. He would eventually be released by the Rams, before being picked up by the Dallas Cowboys. Sam eventually left the NFL altogether for Canadian football, later bowing out of sports altogether. You may have seen him instead on “Dancing with the Stars.”

While football has borne the major brunt of controversy when it comes to the treatment of gay athletes, it’s far from alone in this regard. Earlier this year, former Cardinals minor leaguer Tyler Dunnington told OutSports that he stopped playing baseball altogether because of the pervasive homophobia he experienced as a closeted player.

“I experienced both coaches and players make remarks on killing gay people during my time in baseball, and each comment felt like a knife to my heart,” Dunnington told OutSports in an email. “I was miserable in a sport that used to give me life, and ultimately I decided I needed to hang up my cleats for my own sanity.” In addition, the one-time MLB hopeful explained that he once witnessed an exchange in which one of his teammates told his fellow players that his brother was gay. His peers then questioned how he could ever support such a thing, especially from a family member.

These remarks weren’t just from fellow teammates. They also came from superiors and other staff. During his time playing college ball, a coach told him that “we kill gay people in Wyoming.” This remark was in reference to the brutal 1998 murder of Matthew Shepard, who was beaten by two men and left to die. He would pass away six days later in a Fort Collins, Colorado hospital.

It’s very easy to imagine those same words being said to Glenn Burke, the first gay man to ever play openly in the MLB (even if it wasn’t public knowledge at the time). Burke began his career with the Los Angeles Dodgers in 1979—but was later traded to the Oakland Athletics because of his sexuality. Burke was famously offered $75,000 by Al Campanis, the vice president of the Dodgers, to allow himself to be set up by the team’s executives in a sham marriage. In declining the offer, Burke replied, “I guess you mean to a woman.”

After joining the Athletics, the harassment Burke received behind the scenes only escalated, and the worst of it reportedly came from Billy Martin, the team’s manager. When introducing Burke to his teammates on his very first day with the As, Martin said, “Oh, by the way, this is Glenn Burke, and he’s a faggot.” Burke died of HIV in 1995.

In recent years, the MLB has taken steps to recognize the widespread discrimination Burke experienced in the 1970s by formally honoring his contributions to the sport. “He was a pioneer, and should be recognized,” Pat Courtney, who serves as a spokesman for the MLB, told the New York Times in 2014.

But what has the league done to help other openly gay players follow in his footsteps?

The answer on that front is mixed. Billy Bean, who played in the MLB from 1987 to 1995, has helped the MLB make steps in the right direction. Bean spent his career in the closet, so terrified of being outed by his teammates that he didn’t go to his own partner’s funeral to avoid being exposed as gay. Today, he serves as the league’s Ambassador of Inclusion, helping the majors pave the way for queer athletes. Many executives—including Arizona Diamondbacks president Derrick Hall—believe that baseball is ready for that.

To aid that process, the MLB updated its “workplace code of conduct” in 2014, while “also [providing] training sessions on sexual orientation non-discrimination principles." As the Huffington Post reported, those materials were “distributed to every major league and minor league player,” intended to prevent locker room harassment.

But despite Major League Baseball’s efforts, the league continues to send the gay community a mixed message when it comes to inclusion. As The Atlantic pointed out, the Supreme Court’s 2015 ruling on marriage equality was a brand holiday on Twitter—with businesses across the country proving their LGBT-friendliness by tweeting their support for the community. One industry that was notably silent? Professional sports. Not a single sports team outside of the notably liberal haven of California posted about the groundbreaking decision. (And that’s in either the MLB, NFL, NBA, or the NHL.)

Besides, if the goal of Major League Baseball is to encourage gay athletes to come out, it’s clearly not doing its job correctly: The MLB has yet to have its answer to Jason Collins or Michael Sam. David Denson, the league's first openly-gay player, was drafted last year into the Milwaukee Brewers' minor-league rookie affiliate in Helena, Montana. But not a single one of its major team players is openly gay, despite the fact that there are thousands of men who suit up for the sport every day.

It’s easy to see why. Even while pushing for diversity, the MLB too often remains an unwelcoming to be if you’re gay. In 2012, Yunel Escobar wrote an anti-gay epithet (in Spanish) on his eye makeup, dismissing the suggestion that it was a homophobic act. “It’s just a word,” he said. When Roger McDowell, a pitching coach for the Atlanta Braves, was heckled by San Francisco Giants fans in 2011, The Daily Beast reported that the coach “unleashed a torrent of verbal abuse.” “[H]e threatened to take a bat and shove it up the backsides of the three fans taunting him,” the Beast’s Buzz Bissinger writes. “That’s how you like it here, right?” McDowell allegedly screamed at fans.

As long as professional sports stay openly hostile to queer people, it’s unlikely that more athletes will be willing to risk their careers the way that Sam did by coming out. According to a 2015 report, entitled “Out on the Fields,” gay athletes learn to keep those parts of themselves hidden at very young ages. According to the survey, 83 percent of gay male youth athletes choose to hide their sexuality in fear of harassment, ostracization, or the loss of job prospects. As they reported, it’s just easier to be silent.

If you have to wonder where a bunch of kids would get such an idea, ask the San Diego Padres.