Conservative pundits want Mitt Romney to run, and lose, because it will make them feel better about themselves 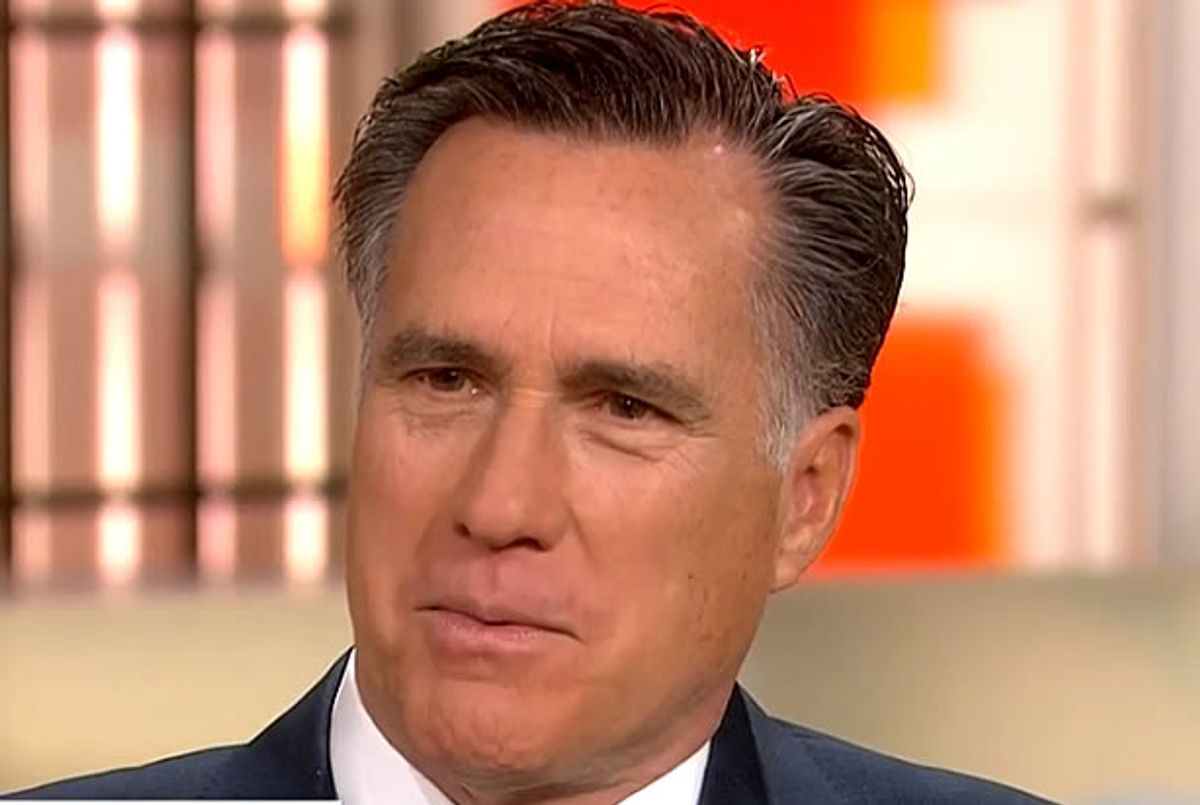 I’m almost to the point of feeling a bit of sympathy for Mitt Romney. It’s been 16 months since Romney officially declared that he would not seek the presidency in 2016, and ever since then he’s been fending off a series of “Draft Romney” entreaties that grew more urgent and pleading as Donald Trump’s nomination looked more and more likely. While he was and still is not willing to become a candidate himself, he did do what he could to try and stop Trump’s rise. Granted, his efforts backfired horribly because he is a uniquely bad anti-Trump messenger, but he at least gave it shot.

Even still, some conservative pundits want still more from Romney, and are once again foisting upon him the ultimate responsibility for keeping Trump out of the White House and saving the GOP. And the tactic they appear to have settled on is to insult Romney until he finally gives in and accedes to their demands.

Conservative Washington Post pundit Jennifer Rubin, a one-time true believer in the Romney cause, wrote on Monday that it might just be time to ask – or maybe demand – that Romney scrape together a third-party run. After ticking off a list of candidates who’ve already declined the “self-sacrifice” of running third-party and wondering “whether we have a generation of pols who lack imagination or courage,” Rubin explains why it’s now incumbent on Romney to run even though he’s a loser who nobody really likes:

Romney is not ideal, but the GOP passed ideal in March. Romney is a plausible, qualified grown-up. Again, that would set him apart in the field.

Romney has not been the first, second or even 10th choice of most Republicans. However, it’s time for other contenders to fish or cut bait. And if the #NeverTrump folks cannot reel in another contender, it’s time to go to a stable, knowledgeable candidate with an impeccable family life. “Yeah, that’ll never work,” you say? Maybe there will be an outbreak of common sense on the center-right. That’d be novel.

And then there’s Erick Erickson, who wrote a piece advocating a Romney candidacy that was steeped in overt desperation:

Romney could provide that. I can’t believe I’m even writing this. But seriously, Mitt Romney should run for President again and transcend party for the good of the country.

So here we have two influential conservative pundits telling Romney that even though he’ll definitely lose, and he’s not all that popular, and they can scarcely even believe that things have gotten so bad that they’re even contemplating it, he should commit time, resources, and what remains of his reputation to an arduous political slog because it would make them feel better about their own relationship with the GOP. How could Mitt say no to that?

Absent from all this is any real recognition of the effort and expense required to run for president. A candidate who wants to jump in now has already missed the filing deadline to get on the Texas ballot, and the deadline for North Carolina is in less than three weeks. In theory, one could challenge those ballot-access requirements in court, but that’s just another layer of time, organization, and expense to add to the pile. Fantasy politics is fun and helps fill the bottomless online content hole, but you can’t just slap together the infrastructure, donor commitments, and all the other stuff needed to put together a semi-competent presidential campaign.

If Mitt were interested in running, he would have gotten the ball rolling months ago. It seems pretty clear that he still has zero interest in running for the White House for a third time. But he still looms large in the imaginations of desperate pundits who are wildly casting about for someone to fulfill their noble vision of a political martyr who will sacrifice himself to stop Trump.