Trump and Newt are a perfect match: "Outsider," "populist" Trump has the D.C. barnacle on his VP short list

Donald Trump apparently has a special friendship with Newt Gingrich, probably because they're running the same con 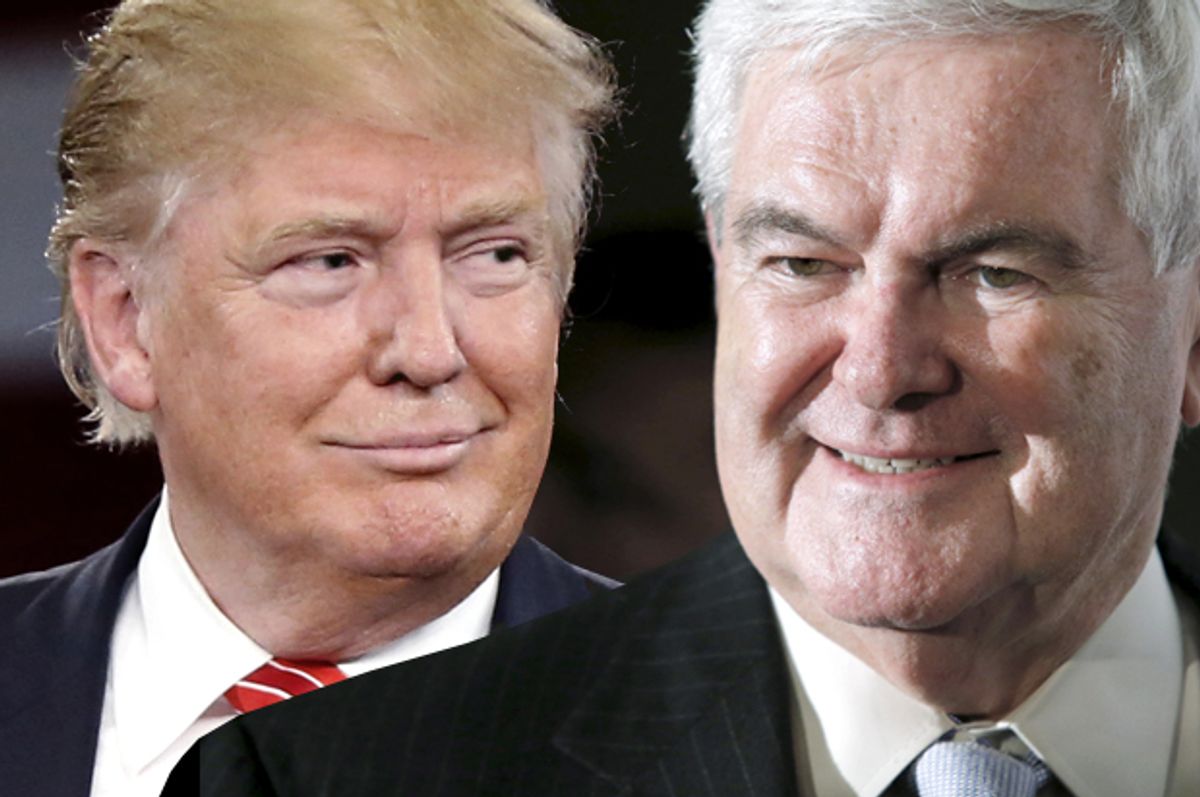 The very fact of Donald Trump’s impending nomination as the Republican Party’s candidate for the presidency is still pretty difficult to accept as a real thing that is actually happening, so it hadn’t even really occurred to me to think about the fact that Trump will select another human being to run for the White House with him. He or she (or he, probably he, almost certainly he) will be making a bold and irrevocable political statement. Their identity, in politics and all walks of public life, will be forever associated with the Trump campaign and all the ugly controversy that has attended it.

Who would possibly sign up for such a job? What sort of hyper-ambitious and amoral striver could look upon the Trump campaign, with all its crass nativism and organizational disarray and ideological incoherence, and see in it the perfect vehicle to advance their interests?

Obviously this the job for Newt Gingrich.

As National Review’s Eliana Johnson writes, Gingrich has formed a special relationship with Trump and is widely seen as occupying the inside track in the race to be his running mate:

Gingrich’s influence within Trump World is widespread. Inside Trump’s newly established campaign offices in Washington, D.C., his fingerprints are everywhere. “Right from the minute I joined we were told that Newt will have his hand in every major policy effort,” says one Trump aide. “So one of the things I do when I’m researching or writing anything, in addition to looking at what Trump has said about anything, I look at what Newt has said.”

As Johnson’s article points out, Newt is, in some ways, a good fit for Trump. But there would also be a deeply hilarious and wildly cynical component to Donald Trump, the “outsider” and the “populist,” selecting Newt God Damn Gingrich as his co-pilot on this political journey.

Just think about everything that Donald Trump has inveighed against as part of his hostile takeover of the Republican Party: he rails against the incompetent elites in Washington, he blasts free trade agreements, he inveighs against people who buy and sell political influence, and he calls for hardline anti-immigrant policies. Now think about Newt Gingrich. He’s a former House Speaker who was bounced from the position amid ethics violations and threats of internal revolt. He’s a big fan of NAFTA and proudly talks about how many jobs it created in Mexico. He’s a “lobbyist” in everything but name only whose post-politics career has consisted largely of charging people money for access to his friends on Capitol Hill. And he’s on record arguing that the GOP had to accept the reality that it is impossible to deport every single undocumented immigrant in the country.

If you recall Gingrich’s own campaign for the presidency in 2012, then you’ll remember how fertile a sniping ground Newt’s personal and professional histories were for his rivals. Mitt Romney, after losing South Carolina in embarrassing fashion to Gingrich, tore Gingrich to shreds in Florida by attacking his DC influence peddling and the fact that he accepted well over a million dollars in “consulting” fees from Freddie Mac. For someone who honestly views Trump as an antidote to the poison of DC insider culture, Newt Gingrich is pretty close to last on the list of people you’d want anywhere near the campaign. But Trump and Gingrich are simpatico with each other because, when you get down to it, they’re both running the same con.

Gingrich’s career in politics ended almost two decades ago, but he’s kept himself immersed in Beltway culture and scraped together a very comfortable living by selling himself as an “ideas man” and by setting up a small galaxy of consulting and communications outfits that exists solely to promote the Gingrich “brand.” Trump is a flashy businessman with a dubious track record who has managed to create and monetize a “brand” based largely on his reputation and the image of success he relentlessly projects. They have a shared talent for enriching themselves through the exploitation of people who should know better but don’t. They’ve learned to thrive on the corruption that exists within their distinct ecosystems. In that way, at least, Trump and Newt are a perfect match.