Abortion rights at stake: Purvi Patel and the fate of pregnant women in Indiana 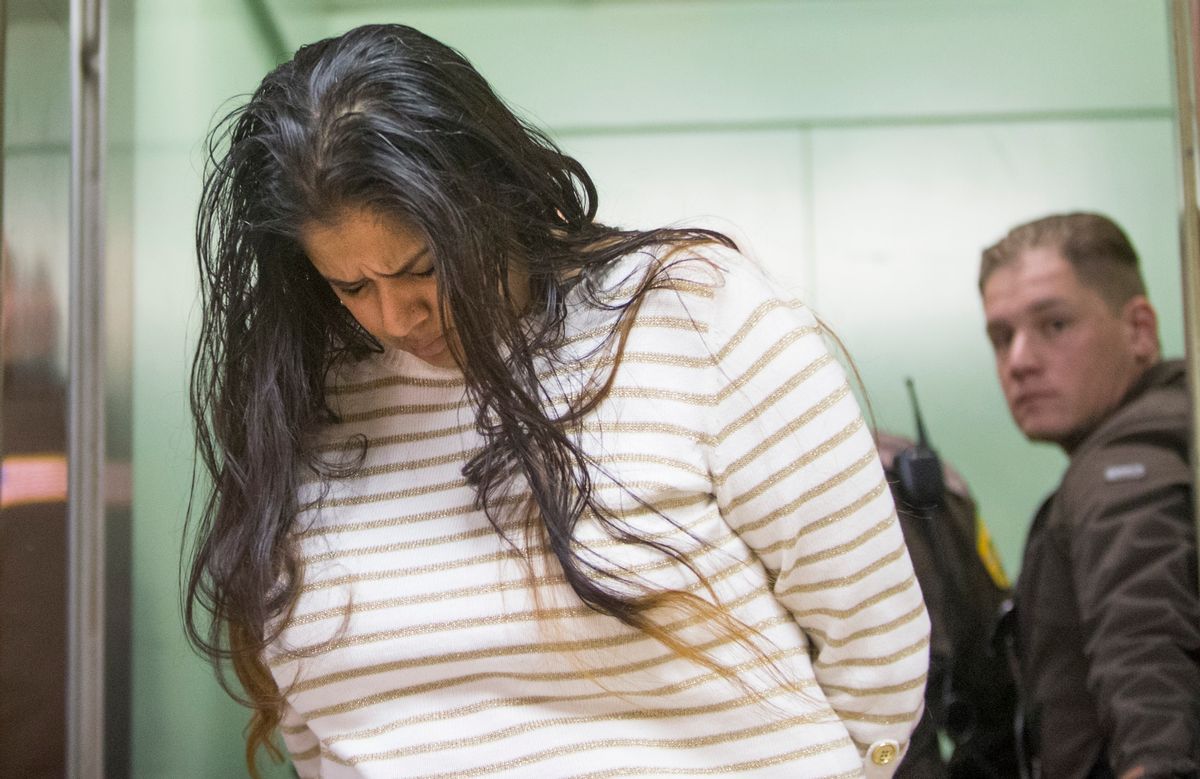 FILE - In this March 30, 2015 file photo, Purvi Patel is taken into custody after being sentenced to 20 years in prison for feticide and neglect of a dependent on at the St. Joseph County Courthouse in South Bend, Ind. Attorneys for Patel will urge the Indiana Court of Appeals on Monday, May 23, 2016 to reverse her 2015 convictions on charges of feticide and neglect of a dependent resulting in death. The state's attorney general's office will defend the northern Indiana jury's decision. (Robert Franklin/South Bend Tribune via AP) MANDATORY CREDIT (AP)
--

Patel, the first woman to be convicted for having an illegal abortion, is facing 20 years in prison. She was not present in the courtroom on Monday afternoon as a three-judge panel listened to arguments on whether or not to overturn her convictions.

In July 2013,  Patel went to the emergency room experiencing heavy bleeding and pain. Her doctor suspected she had an abortion and called the police. After undergoing an emergency surgery, Patel awoke from her sedation to find the police at her bedside, where they interrogated and arrested her. Despite hospital tests finding no traces of any abortifacent in her blood work, the state of Indiana charged her with both feticide for allegedly inducing an abortion, and child neglect for allegedly having a premature baby and then allowing the baby to die. On March 30, 2015, Patel, convicted of both crimes, was sentenced to 20 consecutive years in prison.

Patel’s attorney, Lawrence Marshall, co-founder of the Center on Wrongful Convictions and a professor at Stanford University, argued that the state’s case against Purvi Patel relies on an unfair and incorrect conflation of the charges against her. Step by step he walked the judges through his argument, laying out the inconsistencies.

First, he confirmed that a feticide charge must be based on Patel’s conduct before delivery. Then he clarified that the charge of neglect of a dependent must focus on  Patel’s conduct after the birth. In other words, if the state of Indiana believes that Patel had a live birth, then they cannot charge her with feticide.

And if they believe she neglected a child, they cannot count actions she took (namely taking abortifacient drugs) while pregnant to make the case for the neglect charge, they can only consider the actions she took after birth. So, Marshall argued, the state is trying to have it both ways, by using these two mutually exclusive charges to prop each other up. This, he argued, makes for an insufficient argument in each charge, and unjust and unfair conviction of  Patel.

Ellen Meilaender, the attorney for the state of Indiana, argued that Patel should have taken action that would have saved the baby’s life.

Farah Diaz-Tello, senior staff attorney at National Advocates for Pregnant Women, told Salon that the state’s argumentation was insufficient on each separate charge, saying “Whenever they’d be pressed on the issue of whether there was evidence that the fetus could have survived at all, they’d point to her actions during pregnancy saying that she ‘caused' the birth to take place outside of a hospital. And whenever there were questions about whether the feticide law should apply to actions during pregnancy, they’d point to the things that happened after the delivery.” The judges asked tough questions of both sides, hardly betraying any proclivity to either overturn or uphold the convictions.

One notable exchange during the hearing focused on what exactly constituted a legitimate feticide charge. The court’s ruling on this matter has wide implications for abortion care in the state, and in other states that have or are considering similar feticide laws.

Chief Judge Nancy Vaidik pressed Meilaender on this point, asking “What evidence is there that the legislature intended that [feticide] statute to criminalize a pregnant woman’s conduct?” Meilaender responded that the plain language of the law implies that any person who causes the death of a fetus, including the woman herself, is subject to a feticide charge. Specifically, she argued that the legislature had the opportunity to exempt a pregnant woman from this charge, and while they have made it clear that a woman will not be criminalized for a partial birth abortion, or one based on the race or gender of the fetus,  in Patel’s case the charge is fairly applied under the law.

The judges pushed back on this reading of the feticide law, citing worry that under such a broad reading a woman’s conduct such as smoking or drinking while pregnant, not to mention any other actions not expressly exempt by the legislature, could make her a criminal if her pregnancy didn’t result in a healthy and viable baby. The implications of such a reading of the law are staggering. Women who have abortions or miscarriages could be subject to prosecution if any of their conduct can be interpreted as endangerment - even conduct they might not know to be dangerous. Miriam Yeung, executive director of the National Asian Pacific American Women’s Forum, issued a caution, “Purvi Patel’s case should serve as a warning to women in the 38 states across this country that have feticide laws on the books.”

Diaz-Tello clarified why so many of these feticide statutes don’t have exemptions for the pregnant person, “Many of these laws were passed, like Indiana’s, before jailing people who have abortions or pregnancy losses was even considered as a possibility (in most cases, the pre-Roe illegal abortions were misdemeanors for the person having the abortion).” They were never intended to apply to the pregnant person, she says, and so they don't include an exception.

Consider, once again, the course of events in this case.  Yeung, pointed to the dramatic criminalization of  Patel reflects an important racial element in this case, as well. Yeung told  Salon that only 2 percent of Indiana’s population is Asian American and yet the only women in the state charged with feticide have been Asian American. “There is a narrative about Asian American women that we do not value our babies. Prosecutors painted Purvi Patel as a monster and included racially tinged rationale. For example, doctors at the hospital reported that Purvi had a ‘flat affect’ and the prosecutors concluded that that must be because she was acting guilty.”

The other woman charged with feticide in Indiana was Bei Bei Shuai. Shuai was suffering from depression and tried to commit suicide. She survived while her fetus did not. Indiana did not offer Shuai medical care for her mental illness, and instead held her in prison for a year until they reached a plea agreement.

If we open up the application of feticide laws to such dubious evidence of guilt, every pregnant person in Indiana could be subject to jail time if their pregnancy does not result in a healthy birth. During Monday’s arguments, Judge Terry Crone asked the state about the where this burden lies, and whether someone with a “layperson’s knowledge” of neonatal care could know the impacts of their actions. According to Diaz-Tello, this questions implies the court’s consideration of a Due Process requirement. Namely, whether a person can be justly prosecuted for actions that they do not know to be criminal. The answer to this question will determine the fate of Patel, and potentially many others in Indiana.

Now  Patel’s fate rests in the hands of the Indiana State Court of appeals, and a ruling could be months away. Meanwhile, she remains incarcerated.