Hey Mr. Trump, rape is not sex: His Bill Clinton smears are tricking the media into confusing consensual acts with assault 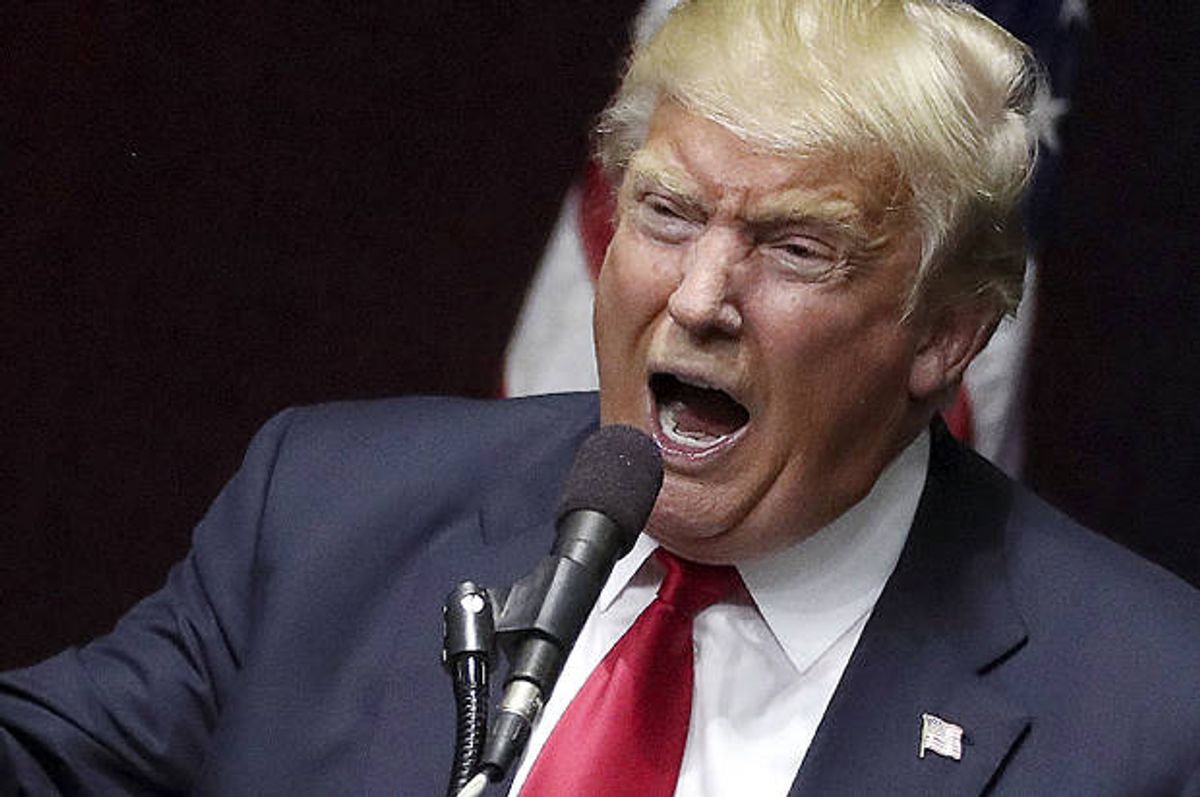 This is what happens when your country is founded by Puritans: Even though it's been two decades since Bill Clinton received what conservatives continue to treat as history's first act of oral sex, the former president's former sex life is in the news again. And sadly, while we're getting retro with it, the reintroduction of presidential sex talk comes with a side dose of the media once again confusing consensual-if-illicit sex with outright sexual assault. Feminists have spent decades trying to get people to understand there's a big difference, but the presidential penis's head bobs back up into our political discourse, and suddenly sense just goes flying right out the window.

Presidential pecker talk has snaked back into the media through two news stories this week: Donald Trump, unrepentant misogynist, is trying to blame Hillary Clinton for her husband's philandering and Ken Starr, the prosecutor who tried to ruin Bill over his affair with Monica Lewinsky, is in danger of losing his job as Baylor University president due to mishandling of sexual assault cases at the school. In  the chatter around both stories, there's been a dangerous tendency to conflate sexual assault and consensual sex.

In the first story, the false equivalence between rape and consensual sex is a deliberate choice on Trump's part. It started with Trump running an ad with a picture of Bill Clinton smoking a cigar, a deliberate nod to one sexual encounter with Lewinsky that Starr lasciviously described in his infamous 1998 Starr report, over voices of women accusing Clinton of sexual assault. The ad ends with Hillary Clinton's laughter, which is clearly meant to suggest that she is somehow encouraging her husband to cheat on her and even assault women.

Trump has been following up this ad with lurid accusations against the Clintons, saying, "in the history of politics, Hillary Clinton’s husband abused women more than any man that we know of" and that "Hillary was an enabler, and she treated these women horribly.”

In other words, Trump's campaign strategy is cribbed directly from egg avatar dudes who think that tweeting right-wing conspiracy theories at feminists all day somehow means that actual rapists never have to be prosecuted again.

Trump is playing a transparent game here, deliberately conflating a fact-based story of Bill Clinton having a consensual affair with a bunch of half-baked rape accusations against him coming from the same right wing fever swamps as accusations that Clinton had his friend Vince Foster murdered. (Accusations which Trump is also gleefully repeating.)

That's not the only grotesque conflation that Trump is using to confuse the issue. He's also plugging into an ugly right wing tendency to claim that feminists who ask that we take rape accusations seriously are claiming that we have to believe 100% of them, no matter how unlikely or ridiculous they are.

Trump deliberately conflating a consensual affair with sexual assault is disgusting behavior on many levels. This kind of rhetoric isn't just about smearing the Clintons. Conflating adultery and rape is also about minimizing the seriousness of rape. It's about making it seem like the problem here is that a man had an unauthorized orgasm, not that he committed a violent crime. It's about implying that feminists who speak out against rape are doing so not because they oppose violence, but because they're trying to control male sexuality. Which, in turn, makes feminists look like the bad guys, instead of rapists.

All of which is why it's irresponsible for journalists to report on Trump's rhetorical shenanigans without noting that Trump has a lengthy history of harassing and abusive behavior towards women, including one major rape accusation from his ex-wife, Ivana Trump. During a divorce deposition, Ivana described an incident where Donald, furious that an anti-balding treatment she recommended didn't meet his standards, held her down, ripped her hair out, and forced himself on her.

Since then, Ivana has denied that the incident counts as rape and has issued multiple statements claiming to regret that choice of words. But she's never recanted any of the details.

Regardless of how you want to classify that specific situation, Trump's overall pattern of grotesque behavior towards women suggests why he personally would benefit from a culture where there's confusion over the difference between consensual sexual behavior and men who cross women's boundaries. Which is all the more reason he should not be allowed to use political attacks on Bill Clinton as an excuse to sow confusion about the difference between consent and abuse.

A similar problem has cropped up in some of the coverage of Ken Starr's problems at Baylor University. Starr, of course, is most famous for his years spent investigating Bill Clinton, which led to the discovery of Clinton's consensual affair, which was, in turn, used as a pretext by Republicans to impeach Clinton.

Now Starr is under fire for failing to deal adequately with the sexual abuse problem at Baylor. There have been a number not just of substantive accusations of sexual assault by football players, but also straight up criminal convictions. But as ESPN documented, the school, even while knowing about many of these, did basically nothing about it. There were also many cases of accusers filing complaints that the school failed to investigate adequately, if at all.

All this is terrible enough, but it's made worse by the fact that Starr has a history of persecuting Bill Clinton for a consensual affair. Unfortunately, some outlets, in making note of this fact, ended up using language that blurs the crucial distinction between consensual sex and rape.

"The irony of Starr's university having a sexual assault investigation scandal has been noted," Jason Kirk at SB Nation wrote.

"This may shape up as an ironic twist of fate for the lawyer-turned-administrator since his expected ouster is reportedly based on how he handled a sex scandal at the school," Ken Meyer at Mediate wrote.

Except Baylor is not enduring a sex scandal. It's enduring a violence scandal. This is not a minor distinction. Clinton's sex scandal was, however, icky, ultimately about garden variety adultery. The litany of cases at Baylor are a horror show of violence and abuse, including gang rape and at least one case of domestic violence that didn't involve rape at all.

This may seem like nit-picking, but there's real danger in casually conflating incidents where consensual-if-illicit sex is exposed with incidents where men hit and rape women. It sows confusion that manipulative monsters like Trump can exploit. It also creates cover for violence, allowing rapists to act like what they did was closer to consensual sex than violent assault, which it is very much the latter.

The ugly fact of the matter is there is nothing ironic or contradictory about persecuting consensual sex while tolerating sexual abuse. The two often go hand-in-hand, such as when  Todd Akin justified banning abortion while sneering that most rapes aren't "legitimate" in his eyes. Policing consensual sex while tolerating sexual abuse is, if anything, a standard issue component of your typical patriarchal society.

Trump, in particular, is not subtle about this. He's sexually harassed women right out in public, but then turns around and demands that we restrict access to abortion and blames rape victims for being around men in the first placee. "You have to treat 'em like shit," Trump is quoted as saying about women. That is the real common denominator here.