Peter Thiel, Trump and the press: Remember the Silicon Valley billionaire's backing the candidate who wants to curb the media

He funds an expensive legal war against Gawker while supporting Trump, who wants to make it easier to sue for libel 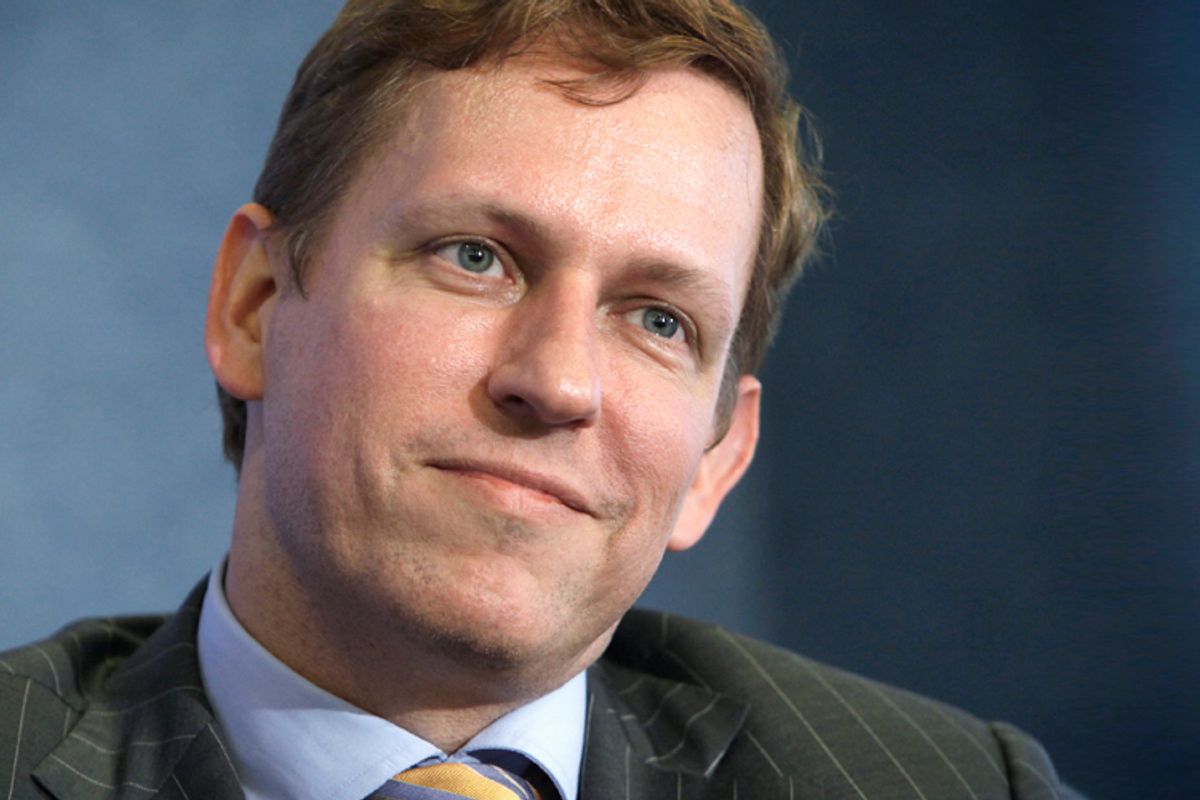 If there’s part of you that thinks Hulk Hogan, Peter Thiel, and Gawker should all be put on the same rocket and launched toward the sun, you’re not alone: It’s hard to generate much sympathy for the obnoxious professional wrestler, the PayPal-founding libertarian, and the news site known for outing people.

But on balance, the report – according to Forbes -- that the billionaire Thiel has been funding Hogan’s lawsuit against Gawker over a leaked sex tape is some of the most disturbing news of the year. It’s as troubling, say, as the rise of Donald Trump to likely Republican primary leader. In fact, in some ways, it’s the same bad news.

Thiel’s side has not commented yet, but here’s Forbes on the suit:

The involvement of Thiel, an eccentric figure in Silicon Valley who has advocated for teenagers to skip college and openly supported Republican presidential candidate Donald Trump, adds another wrinkle to a case that has garnered widespread attention for its implications over celebrity privacy and a publication’s First Amendment rights. During court proceedings, which ended in late March with a $140 million victory for Hogan, there had been rumors that a wealthy individual had funded Hogan’s case though there was never any hard evidence that surfaced to prove that was true.

Thiel is a well-known unpleasant character who was outed by Gawker's Valleywag site ("the Silicon Valley version of Al Qaeda," he called it) at the end of 2007. His Silicon Valley peers are called the PayPal Mafia: They are wealthy and powerful disruptors, and lean toward the anti-regulatory and anti-government.

Thiel's support for Trump could the scariest part, and not just because Trump is scary to begin with. It’s because Thiel – a rich man who is doing what he can to destroy a news outlet, and tried to do it secretly – is backing a candidate who is also a rich man who wouldn't mind destroying news outlets himself.

Trump has been pretty upfront about this. At a rally in Texas in February, Trump said that he would “open up” libel laws to make it easier to sue publications who say things he doesn’t like. There are limits to what a president can do when it comes to muzzling the media. But, as the Washington Post notes, "it is technically possible, without Congress acting on a new law, to lower the libel standard for public figures to match the one applied to private citizens. That would accomplish Trump's mission to make it easier for people like him to successfully sue media companies."

Of course, as a libertarian, Thiel should support free speech. (In 2008, he gave $250,000 to the Committee to Protect Journalists, saying, “As a true believer in the critical importance of free speech, I am delighted to support CPJ’s fight for the rights of journalists around the world.”)

The sticky thing in the public's mind about the case is Gawker. On one hand, its bar for what’s considered “news” can be low. But Gawker Media runs many sites that are responsible platforms, like feminist site Jezebel and the science/science fiction site io9, and there are good, scrupulous journalists on the main Gawker site as well as many valuable stories. In fact, Gawker’s Owen Thomas broke the news about a weird Thiel essay lamenting the fact that women earned the right to vote.

News sources have always been vulnerable to libel suits. But one of the good things about the much-derided corporate media was an army of lawyers, and serious amounts of capital, that protected them. By contrast, some of the most important work in new media is done by smaller sites or nonprofits like ProPublica.

Even the “big” papers are not that big anymore, especially when libel awards can be for astronomical sums. Again, Hogan was awarded $140 million. John W. Henry bought the Boston Globe, along with the Worcester paper, for $70 million.

Whatever you think about Gawker, suing it out of existence is not good for anyone. And what happens when it’s The New York Times or Fortune or a watchdog site that’s destroyed the next time?

Since part of the libertarian platform involves resisting an overzealous state, and encouraging a free press, Thiel’s backing of a candidate who has stated he would attempt to erode a free press goes against his supposed values. But what he really believes is hard to say. Is he another wealthy hypocrite? An angry guy driven by vengeance? At this point, it’s time for Thiel to come clean about what he’s up to.