Trump back to racist rhetoric: After New Mexico rally gets violent, he demonizes the Mexican flag

"The protesters in New Mexico were thugs who were flying the Mexican flag," Trump tweeted 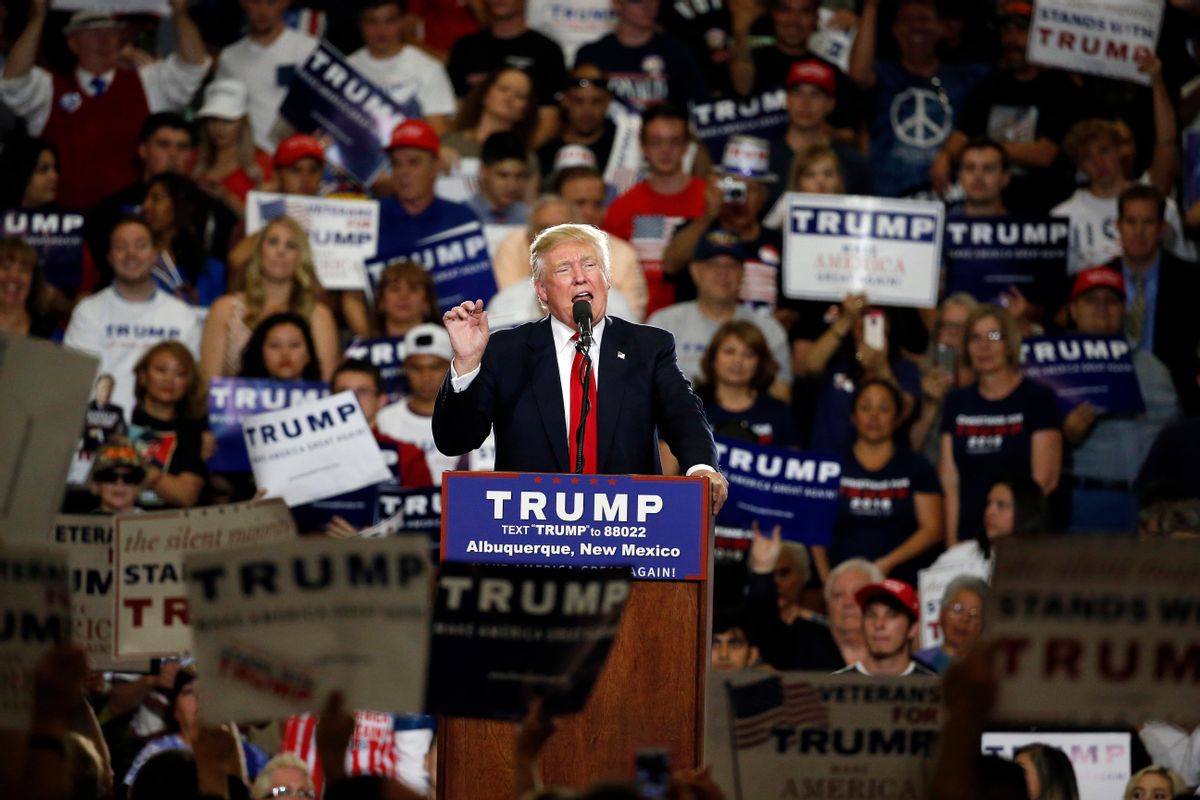 So much for the softer, more moderate Donald Trump that was supposedly going to get rolled out for the general election campaign. After sparing the nation from his George Wallace-esque rallies for a few weeks, Trump decided to gear the machine back up, scheduling the first one in Albuquerque, New Mexico. There were protests, of course, and a handful of protesters got a little out of control, rushing the barricades and throwing rocks at the police, to which the police responded with pepper spray and smoke bombs.

Trump couldn't be more gleeful, exploiting this incident as cover to spew racist garbage on Twitter.

The protesters in New Mexico were thugs who were flying the Mexican flag. The rally inside was big and beautiful, but outside, criminals!

The timing and location of this rally is suspicious. Yes, New Mexico has a primary coming up, but Trump has already won the nomination and has no need to campaign there. As the campaign is no doubt aware, almost half the population of Albuquerque identifies as Hispanic or Latino, basically guaranteeing that protests — which have followed Trump wherever he goes — would be highly emotional, as the candidate has spent the past year using his campaign's bully pulpit to smear people with Mexican heritage as sleazy or criminal people.

And, in case there was any lingering hope he might dial it down for the general election, Trump spent much of the Albuquerque event viciously attacking the state's governor, Susana Martinez, implying that she is lazy and attacking her for supposedly being soft on Syrian refugees.

It's impossible not to read this rhetoric as straight-up racist. Martinez is a conservative Republican. If Trump had any interest in dialing down his image as a bigot, much less reaching out to Hispanic voters, he'd be trying to curry her favor, not calling her lazy or using her name in a broad attempt to provoke fears of immigration. Instead, he just lambasts her, which fits into a larger pattern of Trump being ugly to every person with a Spanish last name that comes across his path.

And, of course, in the most predictable turn of events ever, protesters who got inside the rally were met with cries of "Build the wall!", which, at this point, is inarguably a racist slogan meant to attack Hispanic/Latino people. This is made all the more obvious when you're in New Mexico. A lot of Hispanic families in that state have lived there longer than it's been a part of the United States, after all.

In other words, Trump is running the same stunt he ran in Chicago: Holding an unsubtle and racist rally directly in the middle of a community full of the people that you're demonizing, knowing that if even a few people are upset enough to act out, that will become the news story and not your racist provocation.

This follow-up tweet demonstrates how non-accidental all this is. Trump uses the violent protests as an excuse to smear anyone who is proud of their Mexican heritage as "thugs" and "criminals." It's telling that he doesn't even bother to mention the rock-throwing. No, what he takes issue with is flying the Mexican flag. Which is no different than a Welsh family sporting Welsh dragon gear or a French restaurant flying the French flag. The only reason the Mexican flag is treated differently is plain old racism.

Because Trump is being overtly provocative, it is frustrating to see some protesters take his bait and act out violently. What a lot of people forget is that the non-violence of the civil rights movement wasn't adopted out of some ideological commitment to non-violence, but for strategic reasons: Civil rights activists understood that the second a protester throws a punch or a rock, that becomes the story and not the injustice they are protesting.

However, what people also forget is the practicing non-violence is not easy. Civil rights activists in the 60s had to undergo training by movement professionals in order to learn how to stay in control even when emotions are running high or you are under attack from police or reactionary counter-protesters. Without that training, it's nearly inevitable that a minority of protesters are going to act out in the face of racists taunting them with "build the wall".

Which is why it's important not to let Trump manipulate people with these stunts. Rock-throwing is wrong and people who do it were rightly arrested. But that shouldn't distract from the bigger picture problem, which is that a major party candidate is holding massive rallies where he riles up the crowds with race-baiting rhetoric until they are chanting racist slogans. Or that he's promising to uproot and deport 11 million people. Or that he's encouraging his followers to conflate flying the Mexican flag with being a criminal or a "thug".

Trump is deliberately sowing hate and discord. After the events in New Mexico, he had a chance to offer conciliatory language, but instead he threw more fuel on the fire, demonizing all Mexican-Americans. Instead of obsessing over a few people who threw rocks, the media needs to focus its ire on Trump, a national, public figure who has a rapt audience of millions of people for his racist demagoguery.