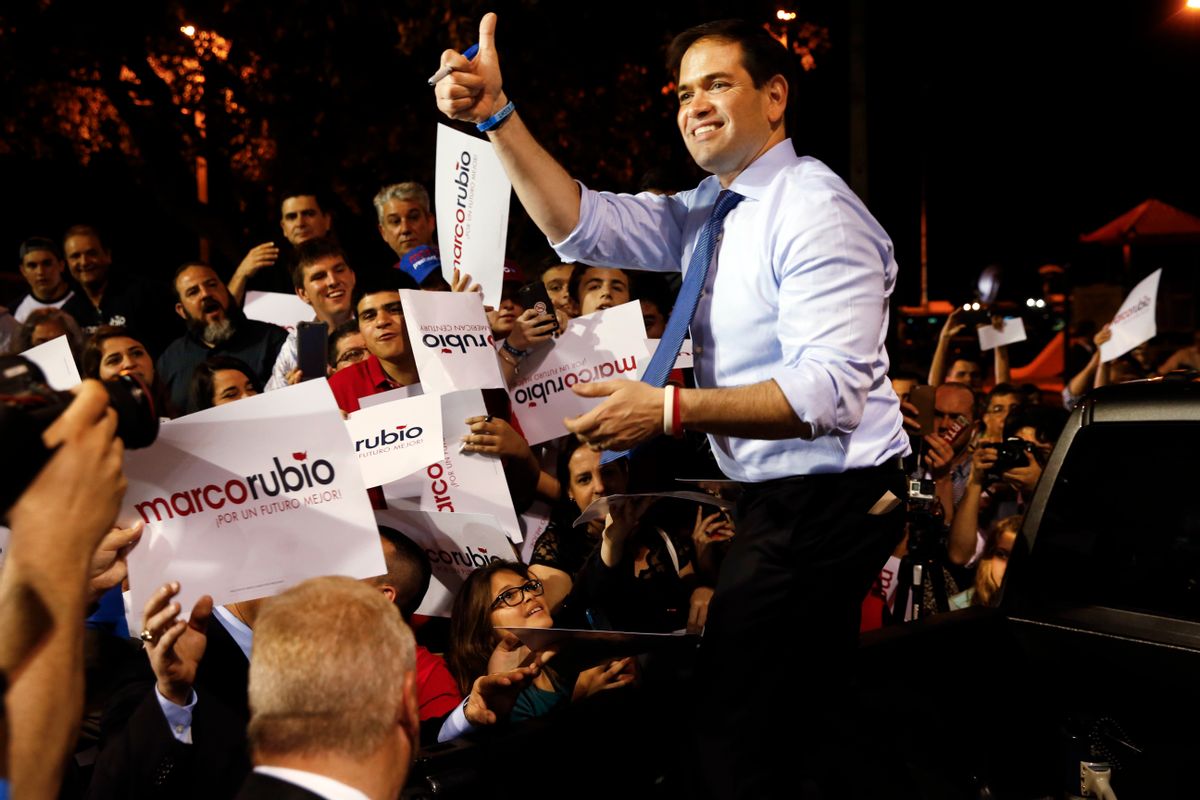 The dominant story of the 2016 campaign is, of course, the Trump putsch, but this election cycle has also proven itself to be a laboratory for discovering new and exciting ways to hollow out campaign finance law and secretly boost the influence of wealthy donors. Lots of campaigns have gotten in on the act and some have gotten way more attention than others as they demonstrate unguarded contempt for the Federal Election Commission and its inability to actually enforce campaign finance laws. New reporting from the Center for Responsive Politics shows that one of the shadier dark-money operations to spring up in the 2016 cycle belonged to Marco Rubio.

And the group accomplished all of this while keeping its donors safely anonymous, including one whale of a benefactor who kicked in over $13 million to get the Conservative Solutions Project’s operations up and running:

New tax documents obtained by the Center for Responsive Politics show that within weeks of Rubio throwing his hat in the ring on April 13, 2015, the nonprofit had raised $13.8 million — $13.5 million of which came from a single, unnamed donor. And most of the money that went out the door went to firms and consultants running the group or to other agencies closely linked to Rubio and his campaign.

One of the groups that benefitted from non-profit’s largesse was 0ptimus Consulting, a DC-based political consulting firm that handled the Rubio campaign’s data analytics, which received over $1.4 million from the Conservative Solutions Project for “research & polling.” 0ptimus played its own special role in circumventing campaign finance law by producing a massive strategy document (with assistance from the Conservative Solutions Project) that all pro-Rubio groups – including the campaign – could utilize to help stay on the same page. Here’s what Bloomberg Politics reported in March:

Anyone who understood the document’s purpose would understand why it had not been packaged to receive wide notice. Credited to the Conservative Solutions Project, a nonprofit organization that had been founded to back Rubio’s candidacy, “The American Electorate” was a skeleton key to the early Republican primary electorate to be shared by Rubio’s campaign and the super-PAC expected to support it. By making the document publicly available on a consulting firm’s website, the research could serve as a point of common reference for entities that were forbidden from directly coordinating with one another.

So an anonymous pro-Rubio donor threw millions of dollars into a shadowy pro-Rubio group that redirected the money to Rubio-affiliated political organizations that coordinated without “coordinating” as part of a concerted effort to elect Marco Rubio president. It’s a complex arrangement that is designed to thwart transparency and maximize the influence of wealthy political donors while violating the spirit the law and capitalizing on the toothless regulatory framework. Rubio didn’t win, of course, but he’s mapped out a blueprint for future campaigns to get around donor limits and obviate rules against political coordination.