What Disney should learn from the lesbian couple in the “Finding Dory” trailer: LGBT inclusion isn’t hard 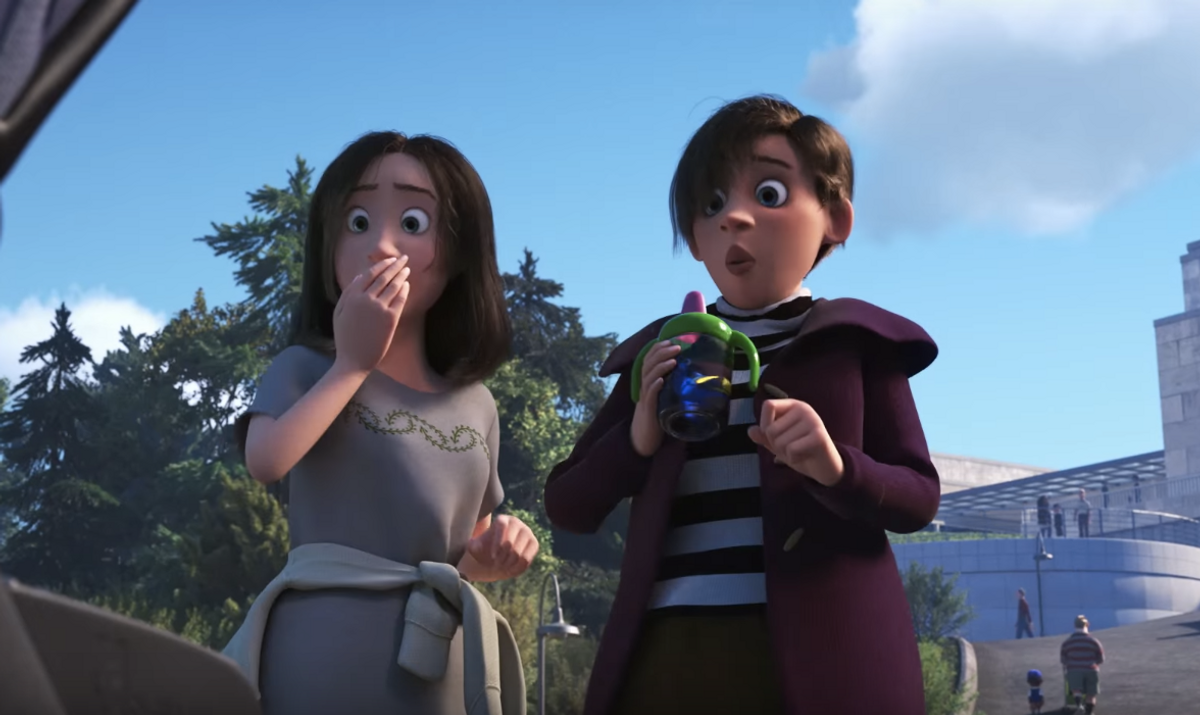 These characters in the "Finding Dory" trailer fueled speculation that the film will be Pixar's first to depict a lesbian couple. (Disney Pixar)
--

After the second trailer for “Finding Dory,” the sequel to the studio’s 2003 lost-at-sea classic "Finding Nemo," dropped online Tuesday, fans spotted what appeared to be a same-sex couple pushing a stroller at the 1:07 mark.

That fact was first pointed out by Twitter user @DLthings and quickly ignited widespread elation on Twitter that the Mouse House is taking steps toward queer inclusion. Many, however, urged caution in getting too excited. As HitFix’s Emily Rome wrote, viewers “really don’t see enough to know whether these two women are romantically linked or not.”

If audiences are perhaps jumping the gun in anticipation of this possible milestone, it’s because queer people are desperate and hungry for more than we’ve been given in the past.

In recent months, LGBT supporters have been pushing for greater visibility in franchises like “Frozen” and “Captain America.” “Frozen” was viewed both by queer audiences and conservative critics as laden with queer subtext: In such a reading, the rejection of Elsa’s magic powers is akin to society’s rejection of homosexuality. The Guardian further called “Let It Go” a “coming-out anthem for lesbian, gay, bisexual and transgender people.” The outlet particularly drew attention to lyrics like “Conceal don’t feel, don’t let them know/ Well now they know!” as having a double meaning for LGBT viewers.

But in the case of “Frozen,” any pretense to queerness is all subtext. For instance, there’s a scene where Anna (voiced by Kristen Bell) and Kristoff (Jonathan Groff) visit a trading post during a blizzard. The proprietor, Oaken, is a jolly, bearded fellow — who might or might not be gay, depending on your interpretation. In the brief scene in which he appears, Oaken waves to his partner and children (who are lounging in the sauna), and it seems that his spouse is a man. But then again, that may not be the case: Rob Price of The Daily Dot argues that the man in question could be “a brother, or cousin, or son, or even just a random customer.” Others have suggested that the woman on the right is his wife and the man in the center of the image is actually just his eldest son.

That’s the problem with subtext: By not making it part of the overt narrative, audiences can more or less read into it whatever they like. To paraphrase Mark Hamill’s statement on Luke Skywalker’s sexuality, Oaken is as gay as we want him to be. That’s why LGBT viewers have been beginning Disney to #GiveElsaAGirlfriend in the planned sequel to “Frozen,” a Twitter campaign that Idina Menzel (the woman behind Elsa) has vocally supported. A similar campaign to allow Captain America to explore same-sex relationships in the Marvel films has reportedly been tweeted more than 200,000 times.

Whether it’s a pansexual Deadpool or a bisexual Riley Matthews (on TV’s “Girl Meets World”), LGBT people are sending the message that subtext isn’t enough. It’s time for Hollywood to do better, which research shows that won’t be very hard. A May report from GLAAD showed that the number of queer characters on the big screen has flatlined. In the non-profit’s annual “Studio Responsibility Index” report, not a single movie studio received a rating of “good,” while three failed outright; these were Paramount, Warner Bros., and (you guessed it) Disney. “Hollywood's films lag far behind any other form of media when it comes to portrayals of LGBT characters,” GLAAD president Sarah Kate Ellis said in a statement.

In 2015, less than one-fifth of movies (17.5 percent) included a character that either openly identified or was overtly coded as LGBT, and most of these appearances were very brief. According to the survey, a vast majority of these characters (73 percent) were on screen for under 10 minutes. In addition, many of these “cameos” portrayed the community in a less than positive light, exploiting LGBT people for tired punchlines. GLAAD particularly drew attention to “Hot Pursuit,” the poorly reviewed 2015 comedy starring Sofia Vergara and Reese Witherspoon. In a notable scene, Witherspoon’s character (then a child) goes on patrol with her police officer father. When he arrests a transgender woman, the young girl compliments her: “You’re so pretty.” The woman responds in a deep voice, “Thanks, baby, you are too.”

The potential case of “Finding Dory,” however, shows how easy it is for studios to aim higher than the bottom of the barrel. Like many of the characters included in the GLAAD report, it’s unlikely that the couple (if they are, in fact, lesbians) factor into the movie’s overall plot. They’re glorified extras. But if fans are excited about what’s — at best — a few moments of screen time, it’s because LGBT people rarely get to be in the picture at all—whether it’s as background actors, wacky sidekicks, inspiring mentors, or even the hero. When we are onscreen, queer characters are often the first to go: Lesbians and bisexual women die on TV so frequently that there’s even a name for it: The trope is called “Bury Your Gays.” Recent casualties have included characters on “Empire,” “Jane the Virgin,” “The Walking Dead,” and “The 100.”

As Kevin Fallon argued in The Daily Beast, making pop culture a safer space for queer audiences is important, serving to rectify years of covert homophobia. Studios like Disney have long had a complicated relationship with queerness. For every Belle or Jasmine who breaks patriarchal norms about what’s expected of women, there’s a dandy villain (see: Hades, Jafar) who reminds young queer kids that being a feminized male is evil and deviant. Fallon points out the egregious case of “The Lion King”: “Scar, with his limp-hand gesturing and sardonic wryness, makes a self-aware joke about how he’s going to ‘practice his curtsy,’ eliciting an eye-roll from Zazu: ‘There’s one in every family—two in mine, actually.’”

Disney has been taking small steps toward greater inclusion in recent years. In 2014, the infamous conservative media watchdog group One Million Moms protested the company after its first lesbian couple appeared on “Good Luck Charlie,” a since-cancelled children’s program on the Disney Channel. The show’s young protagonist, Charlie, invites a classmate over for a playdate. Her peer is accompanied by the child’s parents—Susan and Cheryl. There’s a potential moment of gay panic when Charlie’s parents learn that the two are a same-sex couple, but that realization is immediately dismissed as no big deal. “Taylor has two moms!” Charlie’s father says, slapping his forehead. “Nothing gets past you, Bob,” his wife teases. It’s never spoken of again.

It would be great to have a lesbian Elsa or a “Captain America” sequel where Steve Rogers and his Winter Soldier, Bucky, get cozy by the fireplace. But in the meantime, treating LGBT characters just like everyone else is so incredibly simple that the embrace of “Finding Dory” should show every failing studio a way forward. Whether it’s kids or adults, queer people look to Hollywood to see people like ourselves reflected in any way we can, even if it’s just a brief glimpse of a loving lesbian couple. LGBT folks want our own protagonists, sure, but more than anything, we just want to be seen as human.

Watch the "Finding Dory" trailer below (the couple appears at the 1:07 mark):