David Schwimmer puts in the work: On learning wine, waiting tables and why he "campaigned for years for a black girlfriend" for Ross Geller

Salon talks to the former "Friends" star about class, race and his new post-"People v. O.J." show, "Feed the Beast" 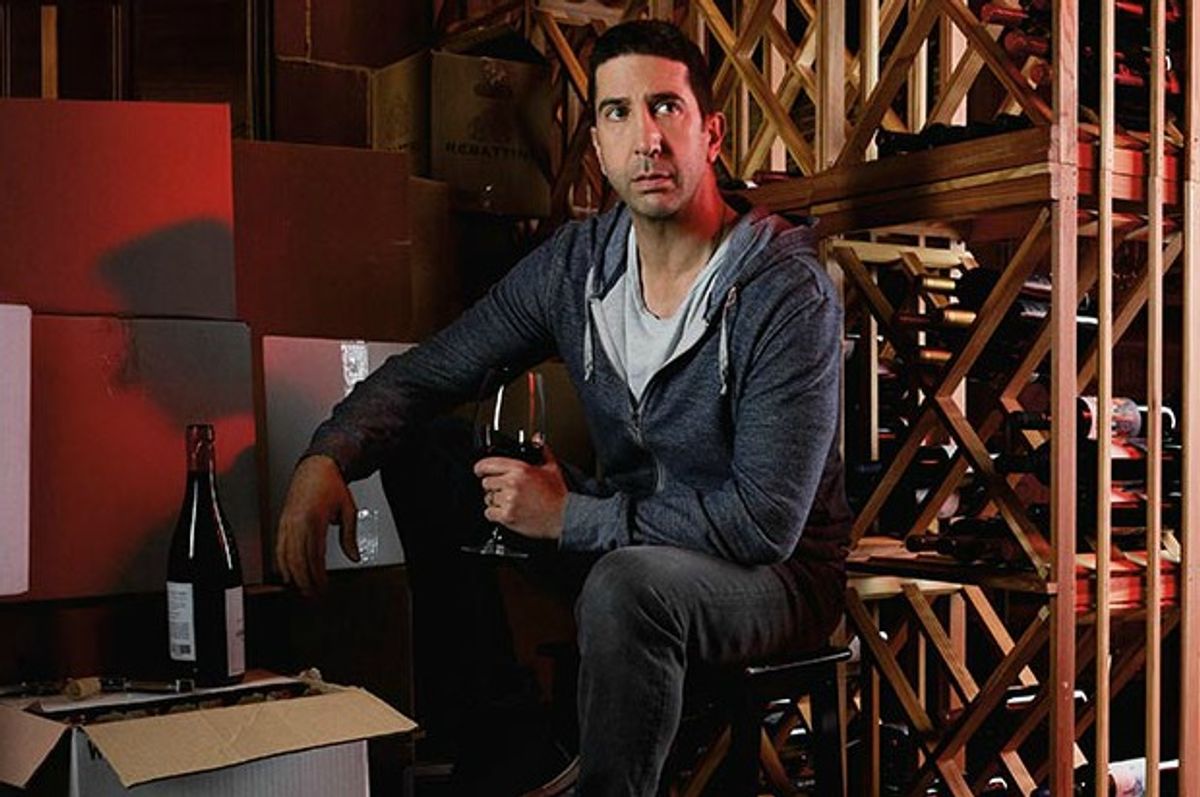 David Schwimmer is having a bit of a renaissance this year, following a magnificent performance as Robert Kardashian in FX’s “The People v. O.J. Simpson: American Crime Story,” the only man in the whole circus who really believed in his friend “Juice.” In June his new show debuts: “Feed the Beast,” on AMC, about two kids who grew up in the Bronx and through a lot of missteps and heartbreak decide to start a fine restaurant in their gentrifying borough. Schwimmer plays Tommy, a widower whose alcoholism is getting in the way of what is an extraordinary understanding and appreciation for wine; British actor Jim Sturgess plays his ex-con addict best friend, Dion, a chef with an adrenaline problem.

“Feed the Beast” comes from “Dexter” showrunner Clyde Phillips, and watching the first few episodes, you can see the resemblance; a bit of splashy fun, a bit of interpersonal drama, and a lot of appreciation for the details of being a craftsman.

Schwimmer’s most famous role, as Ross Geller in “Friends,” is the kind of acting role that makes it easy to underestimate the actor’s talent. But as his costar in “Feed the Beast” Sturgess told me, “Now if I watch an episode of ‘Friends,’ I just realize how fucking good he is at acting. Because he’s not that guy. … every tic, every little move, every quirky thing is just all work. Working, working, working.”

Speaking with Schwimmer this week in New York, I am inclined to agree. In addition to being an underestimated talent, Schwimmer is a thoughtful actor who is thinking not just about his roles, but about the context they exist in. One of the reasons he was drawn to “The People v. O.J. Simpson” is because he appreciated the understanding of race relations that miniseries delivered. I talked to him about where he got that sensibility, where he learned to sound so smart about wine, and why everyone should work in the service industry.

I was never, and never will be, a wine expert. No—I thought I had a passable knowledge of wine until I started working on this role. My first call was to a buddy of mine, his name is Josh Nadel, who happens to be a somm [sommelier] here in the city. I said, "Dude, I need your help, you gotta start training me and teaching me about wine." And now I realize I know next to nothing about wine, because his knowledge is incredible.

I waited tables for seven years, so I knew how to present a wine and open a bottle and pour without breaking some glass. But I wanted to do it at the level he does it, which is like an art form. It is effortless, it is perfect. He presents it beautifully and so... naturally. And so part of my thing was just—show me how you open a bottle and pour and present and talk at the same time. I would videotape him doing that. And then practice on my own, yeah.

And then he'd teach me. We'd do a bunch of tastings. I didn't always spit when I should've, so I got really hammered at the first tasting. Like within an hour and a half, I was like, dude, I think we gotta stop. I can't even hear what you're saying right now. I have had way too much Riesling.

I sent him the first script or two, just to run it by him, and said, "How do you feel about the choices the writers made, about this wine and that pairing?" And he was very respectful, but he was like, “Uh, I don't agree with several of them." So I introduced him to [showrunner] Clyde Phillips and the other writers, and they welcomed him with open arms. He's now a consultant on the show, so every single dish that's written about, he works with the writers with suggesting wines for everything.

For me, as an actor, I didn't want to be doing something that would make me look like an idiot. I wanted those wine experts out there to watch the show and be like "Wow, that is a great choice for that dish." You know, that might be 5 percent of the population watching the show—but still, that 5 percent! I wanted to get them kind of excited about this show, just for that aspect.

Did you wait tables here in the city, or in Los Angeles?

I worked in Chicago. And then in L.A. I worked for seven years waiting tables, off and on between Chicago and L.A.

Look, it was a living. It was a good living. And I got to a place with this one restaurant, the Daily Grill, where the management knew me so well, and knew I was reliable, that they would actually let me go off for auditions. So that was the best thing about the gig. If they had scheduled me for a lunch shift but I got an audition that day, I said, guys, can we move me around? And because of that I was able to pay the rent for seven years while I was auditioning—and working, by the way.

I remember the first time I was on TV, for “The Wonder Years,” I was waiting tables that night. My first episode aired, and the guy at the bar was like Schwimmer, you're on TV!, because there was a TV at the bar. So I was looking over like, "Oh my God, cool.” [turning] “Would you like blue cheese or ranch?" Literally. You know what I mean? You never make enough money to quit your job.

I waited tables for a year and it was the hardest thing I've ever done.

One of the things that I thought was fascinating about “Feed the Beast” is that its characters were very recognizable to me. Food culture is often very upper-crust, but for people who work lifelong in the service industry, this is a segment of the working-class population that is very knowledgable about food and wine.

Yeah. A lot of chefs and somms are self-taught—they started just waiting tables or bartending and somehow apprenticed the somm in that restaurant, and then, you know what I mean. By the way, that's not only my character's backstory, that he's self-taught, but my friend Josh Nadel, the somm, is self-taught. You know, he was just a New York kid who found a passion for wine.

I have read, over years of reading comment sections, that making the cast of “Friends” more diverse was something you particularly were dedicated to. Is that true?

It is true. I campaigned for years to have a black girlfriend, you know what I mean? Aisha Tyler. It's just, like—what can I say? I was well aware, as a white man, that doing a show about New York and six New Yorkers—and all of us happen to be white? Yes, I was Jewish—the other white meat—but still I'm a white man, so I enjoy all the privileges that comes with that.

It's just always been something I've been particularly attuned to and sensitive to and passionate about. The idea that Clyde had of casting my wife on the show—my deceased wife—as a black woman from New York, and that we have a mixed-race kid. I thought that was fantastic. And I think [the “Feed the Beast” writers] are consciously doing a really nice job of trying to make the show more reflective of the city. Of New York.

When you were doing that lobbying in the ‘90s, you anticipated a major shift in the conversation about the importance and challenges of diversity in casting that is currently ubiquitous in TV and in television criticism. How did you get so ahead of the curve?

My parents. Oh, yeah. My parents are New Yorkers. I was born in Queens, they were born in Brooklyn and Queens, but then we moved to L.A. when I was a very young kid. And from day one, they've always been activists, and very progressive. They put me in a school... they found one of the few schools in L.A county—actually, it was in Tarzana—called the Center for Early Education, which was an incredibly progressive, very diverse school, not only in terms of ethnicity but in terms of sexual orientation, parents, different kinds of couples. So it's absolutely just how I was raised. That's just it.

Your parents were ahead of the curve, too.