Pent-up fury beneath the Bernie and Trump phenomena

No matter what happens this year to Sanders and Trump, their fired-up supporters won't go away 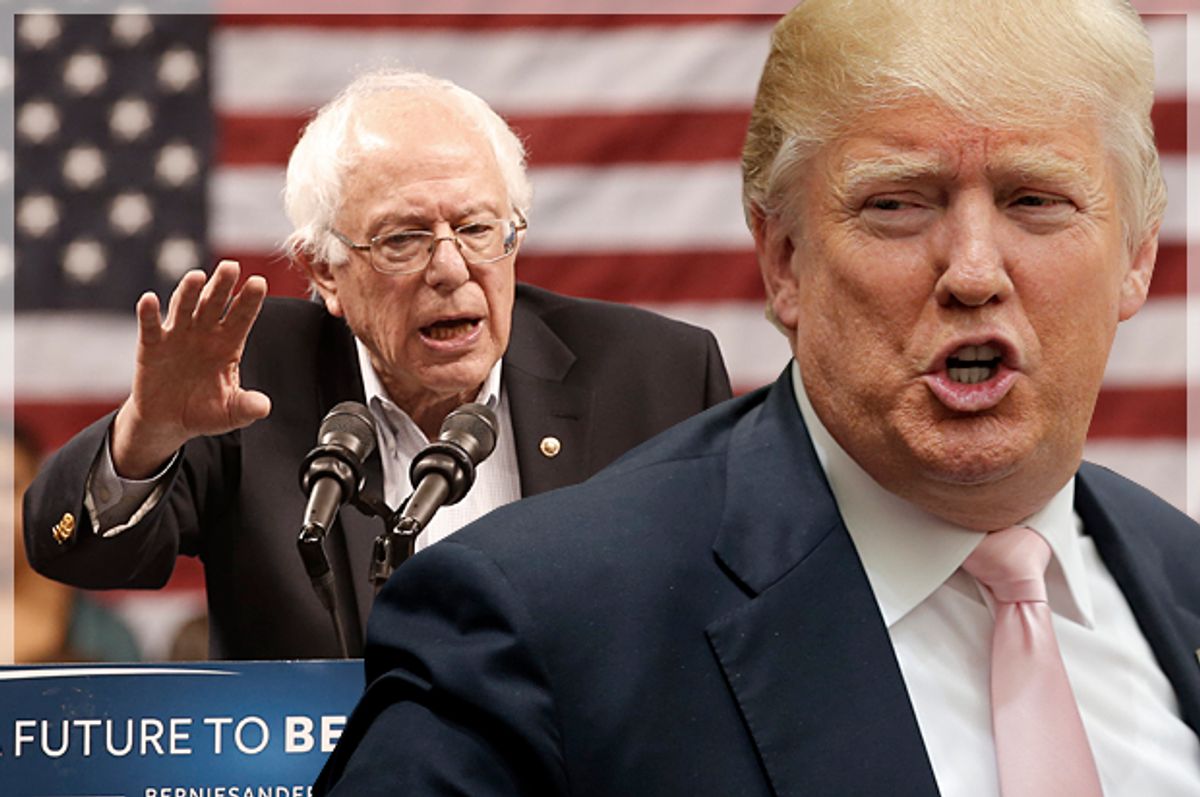 Jack Nicholson dryly noted that his mother once called him a son of a bitch — and didn't comprehend the irony.

2016 has certainly been an odd year for the political and corporate elites. They certainly couldn't predict (and then subsequently stayed in denial about) the groundswell from the masses in terms of the popularity of Bernie Sanders and Donald Trump. Much like the Nicholson example, the aloof Powers That Be are oblivious to irony: They are the ones who gave birth to the mass anger that now confronts them.

The political cognoscenti have not understood the massive public rage from today's "unAmerica" of glaring inequality and mass downward mobility that is the direct product of their wrenching the system with such power tools as: "free" trade agreements, union busting, defunding public services, downsizing, offshoring, price gouging, Citizens United, privatization, the Wall Street bailout, student debt, tax dodging, criminalization of poverty, militarization of police ... and so god-awful much more.

Instead of comprehending the public rage from the above injustices, the established powers have lashed out at these political riff-raff and intruders. Their conventional wisdom (endlessly parroted by the corporate media) is that hordes of blue-collar voters, young people, independents, and others surging into the two outsiders presidential campaigns have been naive, unrealistic, selfish, stupid, ignorant, racist, misogynistic, anti-immigrant, fascist or some combination of the above. Of course, such characteristics can be found among every campaign's supporters, but smearing an insurgency of millions as nothing but airheads and haters only reveals the desperation of the smearers.

Take Trump's campaign. Yes, he has recklessly continued to fan the embers of hate, belittling Muslims, the disabled, Latino immigrants, women, Spanish-language reporters, and his catchall category of "losers" — all the while reveling in the role of outlandish, boorish autocrat. Therefore, pundits and the GOP's big shots conclude, his appeal and his supporters are racism personified. End of discussion. Yet, in addition to walling off Mexico and banning Muslim refugees, Trump speaks about NAFTA, runaway corporations, and our "stoopid" leaders who've turned their backs on American manufacturing and the struggling of families who count on those good jobs -- and that's what many of his working class supporters say they're responding to.

Sanders, too, is winning phenomenal support from a similar constituency, and he's winning an amazing 70-85 percent of 17-to-30-year-old voters. Like Trump, he's hammering the pampered rich who disdain and discard the working class, but in a very different way: He's also offering a renewed, uplifting, Rooseveltian vision of an "America for All," not just for billionaires.

The real story, however, is not about the two maverick candidates, but about the waves of ordinary people who've created and lifted their campaigns. They embody and give voice to the millions wrecked by Wall Street greed in the 2008 crash, who were left out of the widely ballyhooed "recovery," and who now realize that they're not included in the elite's laissez-faire schemes of future American prosperity. These voters are hurting today, distressed about tomorrow, and fed up with the two-party indifference to "people like us."

They are the reason the Bernie and Donnie phenomena are not just 2016 flare-ups — but in the words of Sanders' clarion call — "a political revolution." The elite's ploys to trivialize the impact of these campaigns will only stoke the fires of the newly politicized outsiders. No matter what happens this year to Sanders and Trump, the people are not going away. The rebellion is on. Sanders and Trump are only the current messengers. The message itself is that We, the Grassroots People, now see that we're being sold out to giant corporations by our own leaders. Like the distant rumble of thunder, the boisterous uprising of outsiders in this year's presidential election signals the approach of a historic storm.