Trans exploitation in Texas: The right's flimsy panic sure is conveniently timed for the election

This conservative freakout is a lot like the same-sex marriage panic of '04: A gambit to shore up the GOP in 2016 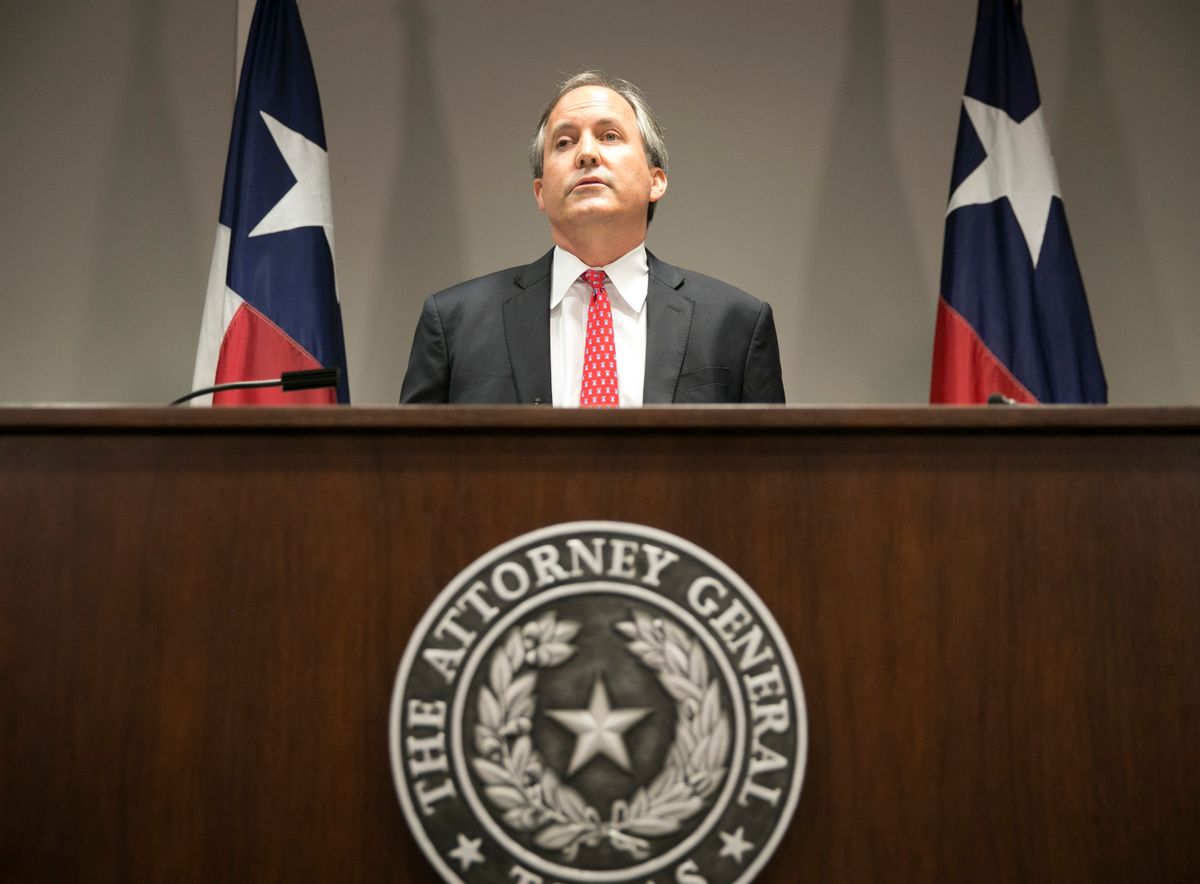 Wednesday, Texas, along with many other red states, filed a lawsuit against the federal government for sending out a letter reminding schools that adherence to federal anti-discrimination laws requires respecting transgender students and letting them have equal access to facilities.

As Zack Ford of Think Progress explains, the premise of the lawsuit is flimsy even by the low standards of right-wing hysterics. It's based on two premises that are flat-out false: That the federal government is requiring schools to "open all school bathrooms to people of both sexes" and an implicit denial that transgender people even exist.

The lawsuit is strange and flimsy, but that might be beside the point. Transgender people have been around since forever and plenty of state and local governments have been practicing non-discrimination with nary a peep of a problem. And yet, seemingly overnight, all of a sudden every Christian conservative in the nation decided, out of the blue, that the threat of trans people in the bathrooms was our country's greatest crisis.

The likeliest explanation for what's going on, then, is that this panic about transgender students is a transparent election year stunt designed to rile up evangelical voters and get them to the polls in November.

With Donald Trump as the Republican nominee, fears that many conservative voters might not even bother to get to the polls this year are sky high. Already some polls are showing that Trump could  have a negative impact on down ticket races for Republicans. Desperate conservative bloggers are begging their people to suck up their distaste for Trump and vote anyway, to preserve the power of congressional, state, and local Republicans.

Under the circumstances, a little sex-and-gender panic starts to feel like just the ticket to get Christian conservatives to hold their nose and vote this year. The whole implication of this panic is that Barack Obama, and therefore Hillary Clinton, are going to turn your kids into a bunch of queers and weirdoes and the only way to stop them is voting Republican. The fact that the Democratic candidate has a shot at being the first female president only makes the issue of people supposedly doing the "wrong" thing for their gender all the more salient to conservatives.

If this theory sounds paranoid, consider that this is exactly the strategy that Republicans used in 2004 to push George W. Bush over the top in a close race with John Kerry.

Most notable among these was Ohio, a swing state where presidential polls were nail-biters until the very end, when the state tipped red, handing the election to Bush with 130,000 vote lead. Post-election analysis showed that same-sex marriage was the tie-breaker in the state. The fear of having to see the "wrong" kinds of couples get married got out the evangelical vote. Without the hysteria over gay marriage, we almost certainly would have had a President Kerry. Which would, in turn, mean that instead of John Roberts and Samuel Alito on the Supreme Court, we would have two more liberals, creating a majority.

After you recover from crying over what might have been, consider how quickly the issue of same-sex marriage turned around after that. After the initial "ick" reaction drove people to the polls to vote against it, the nation quickly began to realize that, upon second thought, it is not a big deal if two dudes want to marry each other. Within 11 years, the Supreme Court legalized same-sex marriage, with one of the conservatives voting for it.

But it didn't really matter to the right, because the stupid panic over same-sex marriage had done its dirty work, preserving conservative hold on power for another decade and handing control of the courts to the right.

Which is why, I suspect, they are running the same script on transgender people and bathrooms. It has all the same markers of the opposition to same-sex marriage: Half-baked arguments, squabbling over definitions (conservatives would often flatly declare that marriage, by definition, has to be man-woman marriage), feigned concern for "the children" and, above all other things, trying to override people's logical faculties by speaking in hyperbolic terms designed to elicit disgust reactions.

This lawsuit is almost hilariously flimsy, or would be, if it weren't so hateful. The claim that the feds are demanding an end to sex-segregated bathrooms is laughably easy to disprove. As the letter sent by the Department of Education clearly lays out, "Title IX’s implementing regulations permit a school to provide sex-segregated restrooms, locker rooms, shower facilities, housing, and athletic teams, as well as single-sex classes under certain circumstances."

In order to get around this problem, Texas Attorney General Ken Paxton has decided to pretend that transgender people don't exist. He never uses the term "transgender" once, except when quoting others, in the suit. During the press conference, when he was asked if he accepted that trans people exist, he dodged. It's clear that Paxton is playing off right-wing bigots who claim that trans people are just play-acting as the opposite gender.

But that claim doesn't pass even a moment's muster. Consider how Mike Huckabee tried to frame this issue last year, saying, "Now I wish somebody had told me when I was in high school, that I could have felt like a woman when it came time to take showers in P.E. I’m pretty sure I would’ve found my feminine side and said, ‘Coach, I think I’d rather shower with the girls today.'”

So Huckabee and the state of Texas  are seriously trying to argue that young men, in high school of all places, are going to get up in front of a roomful of their peers and claim that they are "actually" female, just to get a peek at some boobies? Have they met any teenagers? They sure as hell don't remember being teenagers, if they think there's a cisgender boy alive who would endure the teasing he would get for pretending to be female because he's so hard up on the dating market (and apparently devoid of an internet connection) that he has no hope of seeing boobies naked otherwise.

Just as with the same-sex marriage issue, once people have a chance to really think this through and learn a little more about the issue, they'll realize that accepting trans people in bathrooms and locker rooms is really no big deal. In fact, most of us have already done so, whether we knew it or not, because most of us don't exactly go out of our way to either show off our naked bodies or gape at others in those spaces.

But to Republicans, it hardly matters that they will lose on this issue. The only thing that matters is stoking a short-lived panic that will carry them through this election and blunt the impact of a Trump run on their polls. If the whole thing falls apart like the same-sex marriage thing did, so be it. It served its purpose. And that trans kids, actual living people who need support, are suffering because of this, clearly doesn't matter one bit to them.