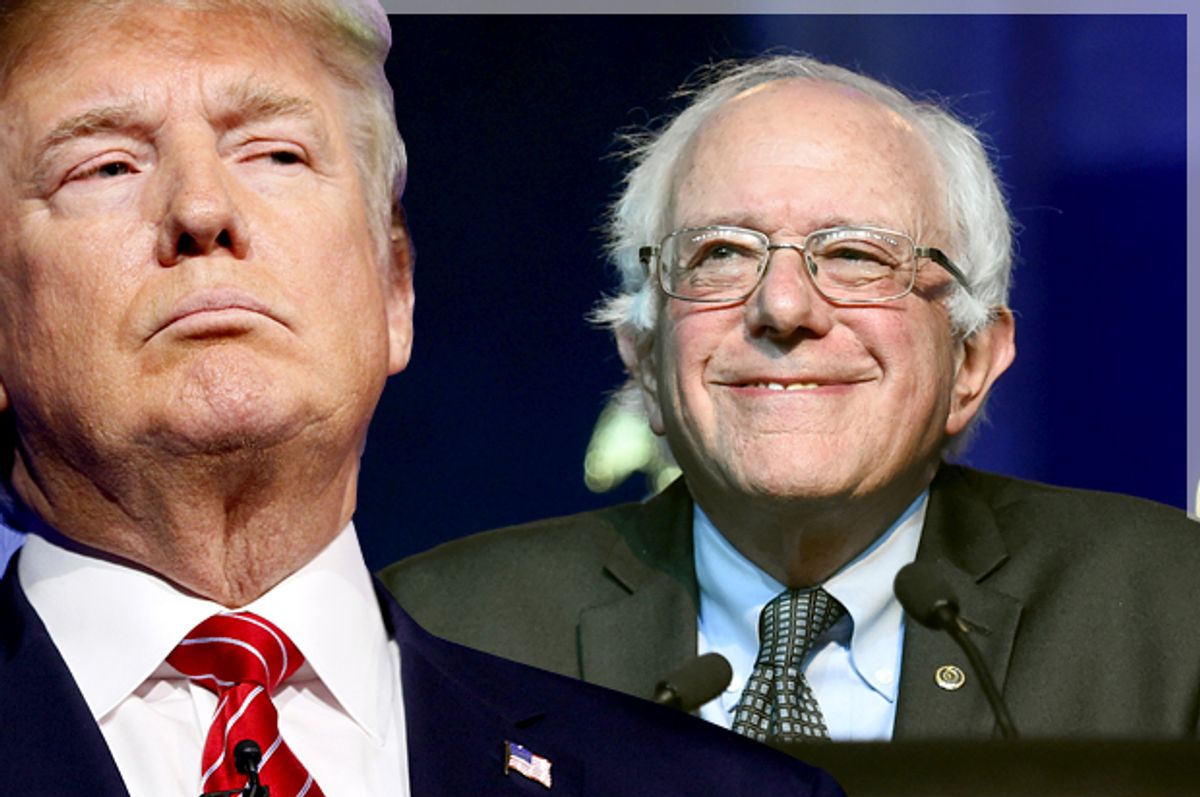 Donald Trump's only consistency is that he flip-flops.

Unfortunately for the Bernie Sanders campaign, he's done it again and bursted any hopes of an unprecedented debate between the presumptive Republican nominee and a Democratic candidate who is virtually eliminated from any contention of securing that party's nomination.

"Based on the fact that the Democratic nominating process is totally rigged and Crooked Hillary Clinton and Deborah Wasserman Schultz will not allow Bernie Sanders to win, and now that I am the presumptive Republican nominee, it seems inappropriate that I would debate the second place finisher," Trump said in a statement released late Friday, effectively squashing a plan he initially agreed to earlier this week.

"As much as I want to debate Bernie Sanders," the cowardly candidate continued, "I will wait to debate the first place finisher in the Democratic Party, probably Crooked Hillary Clinton, or whoever it may be."

Moments earlier, the Sanders campaign, which had spent all week cultivating a potentially historic debate against Trump, including feeding ABC's Jimmy Kimmel the challenge which Trump accepted on-air Wednesday, relayed that both campaigns had actually received offers to host the debate, complete with a donation to charity, from two broadcast television networks.

“Yes, I am,” Trump responded when Kimmel relayed a question from Sanders during an appearance earlier this week: Are you willing to debate?

"How much is he going to pay me?" Trump asked the late-night host. "If he paid a nice sum toward a charity, I’d love to do that.”

But in typical Trump fashion, campaign aides were quick to tamp down excitement over the possibility of a debate, while Sanders, locked out of any televised debates after Democratic rival Hillary Clinton turned down an offer to debate on Fox News, upped the ante with calls to host the event in California's largest stadium before next month's primary.

On Friday, Trump finally put any speculation to rest after the Sanders campaign released this statement:

Our campaign and the Trump campaign have received two offers by broadcast television networks to host the Sanders-Trump debate that we suggested. Both offers include a major contribution to charity.

We are prepared to accept one of those offers and look forward to working with the Trump campaign to develop a time, place and format that is mutually agreeable. Given that the California primary is on June 7, it is imperative that this all comes together as soon as possible. We look forward to a substantive debate that will contrast the very different visions that Sen. Sanders and Mr. Trump have for the future of our country.

Sanders hopes Trump changes his mind about debate. "Mr. Trump is known to change his mind many times in a day" https://t.co/El9Z7BPhVr