For decades, GOP has used the war on drugs or voter ID laws as cover for race-baiting. Trump just blew their cover 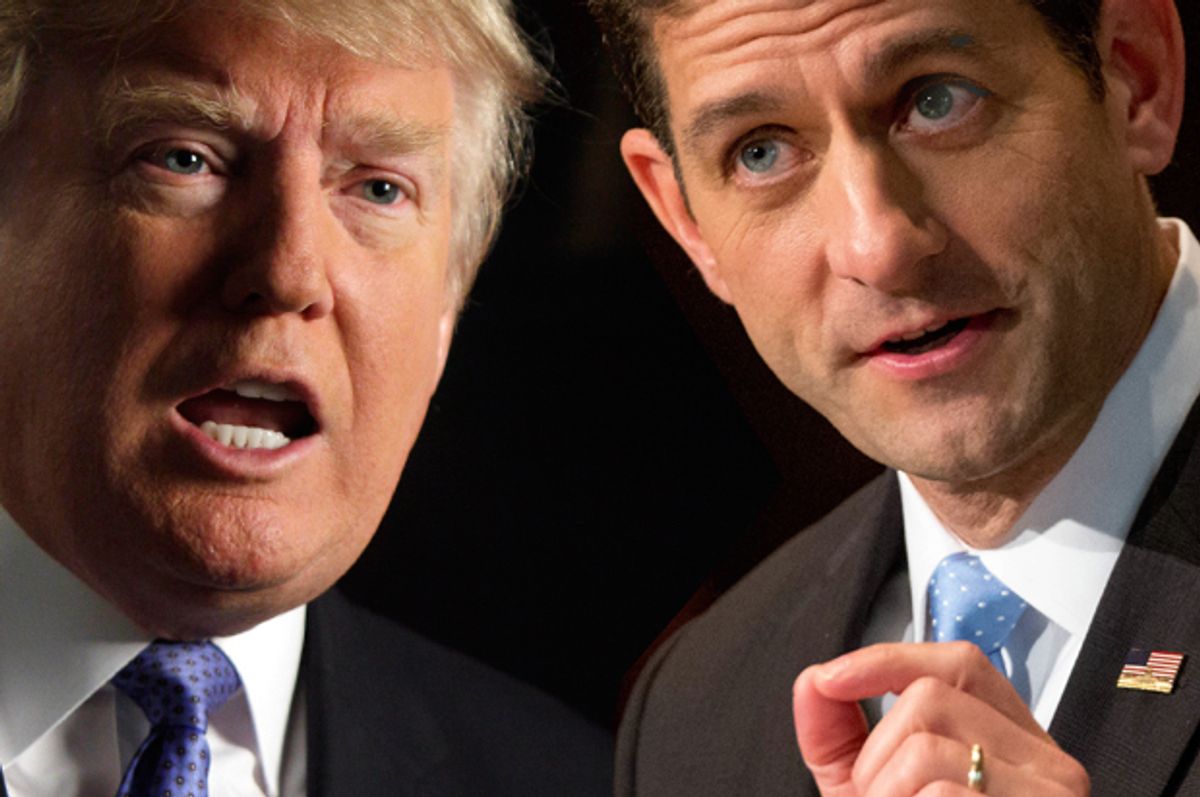 Paul Ryan is angry with Donald Trump, not so much for failing to espouse conservative values, as for exposing America’s dirty little secret -- white rage: that deep-seated determination to block black progress in this country. For years, conservative politicians have relied upon the cover of high-minded principles and slogans – “protecting the integrity of the ballot box,” or waging a “war on drugs” -- in order to cloak their determination to restrict African Americans’ citizenship rights. The racism fueling Trump’s campaign and his followers, however, is so overt, that it is undoing decades of hard covert work by the GOP.

When Trump didn’t immediately disavow an endorsement from Klansman David Duke; when the GOP front-runner condoned the beatings African Americans endured at his campaign rallies; and when 20 percent of his followers insisted that the Emancipation Proclamation, which ended slavery, was bad policy, Richard Nixon and Ronald Reagan’s carefully stitched plan of “racism with plausible deniability” began to unravel.

Shortly before he died, Reagan’s strategist Lee Atwater explained the game plan of the Southern Strategy in a matter-of-fact clinical policy. “By 1968 you can’t say ‘n***r’ — that hurts you, backfires,” Atwater emphasized. “So you say stuff like, uh, forced busing, states’ rights, and all that stuff. And you’re getting so abstract now, you’re talking about cutting taxes, and all these things you’re talking about are totally economic things and a byproduct of them is, blacks get hurt worse than whites.” But Donald Trump doesn’t do abstract and that is what has sent the GOP into a tizzy.

Nixon and Reagan mastered this by adapting to the new racial terrain carved out by the Civil Rights Movement. As Nixon aide John Ehrlichman explained to Harper’s Dan Baum in 1994, “We knew we couldn’t make it illegal to be against black[s], but by getting the public to associate . . . blacks with heroin, and then criminalizing” the drug “we could disrupt those communities,” Ehrlichman said. “We could arrest their leaders, raid their homes, break up their meetings, and vilify them night after night on the evening news. Did we know we were lying about the drugs? Of course we did.”

But that lie was infinitely effective in driving policy. In 2008, the NAACP reported that “five times as many whites are using drugs as African Americans, yet African Americans are sent to prison for drug offenses at 10 times the rate of Whites.” Consequently, blacks comprising just 13 percent of the U.S. population made up “59% of those in state prison for a drug offense.” Packaged and sold as keeping neighborhoods and families safe, the Nixon administration’s well-targeted lie, which was expanded upon by Ronald Reagan, and taken up by Democrats such as Bill Clinton to prove that they could be “tough on crime, too,” has worked masterfully. Because many states disfranchise those with felony convictions, the Sentencing Project reports that 2.2 million African Americans or 7.7 percent of black adults have been legally stripped of their voting rights; as compared with 1.8 percent of the non-African American population.

The trick to pulling this off was subtlety; to mask overt racism with sincere concern for community safety. Nixon did it with “law and order,” Reagan with “the war on drugs.” But Trump’s jugular racism has no subtlety. In November 2015, Trump sent out a tweet to his 6.23 million followers that 81 percent of white homicide victims were killed by African Americans. Of course, it’s a lie; the same lie that drove Dylann Roof to get his country back by gunning down nine black people during Bible study. In fact, 84 percent of white murder victims are killed by whites. But to drive home his misbegotten point, the mogul placed a picture of a gun-toting black thug next to the statistics.

Trump’s take-no-prisoner style exposes in ways that no legitimate Republican front-running presidential candidate has in decades the racial lies behind the policies. That’s the problem the GOP really has with him.

The Republicans’ current crusade to “protect the ballot box” is a case in point. According to a 2012 Gallup poll, 89 percent of the GOP is white. As the Pew Research Center reported, minorities make up more than 30 percent of voters nationwide, a figure that is only growing. South Carolina Sen. Lindsey Graham admitted, “We’re not generating enough angry white guys to stay in business for the long term.” Republicans have, therefore, tried to handle their demographic apocalypse by disfranchising African Americans and other minorities but doing so under the guise of stopping (virtually non-existent) voter fraud, using in-defense-of-the-nation language.

Todd Allbaugh, former chief of staff for Wisconsin state Sen. Dale Schultz (R), confessed that stopping voter fraud was not the point. “I was in the closed Senate Republican Caucus when the final round of multiple Voter ID bills were being discussed. A handful of the GOP senators were giddy about the ramifications and literally singled out the prospects of suppressing minority and college voters.” Another Republican, this time in Florida, admitted that the plan to significantly trim early voting in 2012 was racially-targeted: “I know that the cutting out of the Sunday before Election Day was one of their targets only because that’s a big day when the black churches organize themselves” and bring busloads of African American voters to the polls.

The results of the GOP’s ballot box shenanigans have been devastating. A recent study in 2016 by political scientists at the University of California-San Diego found the voter suppression laws throughout the United States dramatically decreased minority participation in elections because blacks and Hispanics are the least likely to have the types of identification the state requires. As a result, “turnout among Democrats in general elections dropped an estimated 7.7 percentage points, while Republican turnout dropped 4.6 percentage points.” More than that though, the study found “For strong liberals the estimated drop in turnout in strict photo identification states is an alarming 10.7 percentage points. By contrast, the drop for strong conservatives is estimated to be only 2.8 points.” Clearly, the plan is working just as effectively as “law and order” and the “war on drugs” did. And similarly, Republicans have taken umbrage at the charge that these new voter laws are racially targeted.

So, when Trump says that he doesn’t want people and these “illegal immigrants” to just “walk in off the street” and “sneak through the cracks” to cast a ballot, and that “You have to have—and whether that’s an ID or any way you want to do it. But you have to be a citizen to vote,” he’s parroting contrived Republican strategy but being far too obvious about it. Just about as obvious as when he maligned Mexicans in the United States as drug mules, criminals, and rapists.

And that’s the problem. What the GOP is really mad about is that Donald Trump has made visible what many have tried so hard to hide.

Carol Anderson is the Samuel Candler Dobbs Professor of African American Studies at Emory University and the author of White Rage: The Unspoken Truth of our Racial Divide.