Kitty Genovese had a life, not just a death: "She wasn’t just this murder victim"

Salon talks to her brother Bill about "The Witness," that "Girls" episode & 50 years of questions about her murder 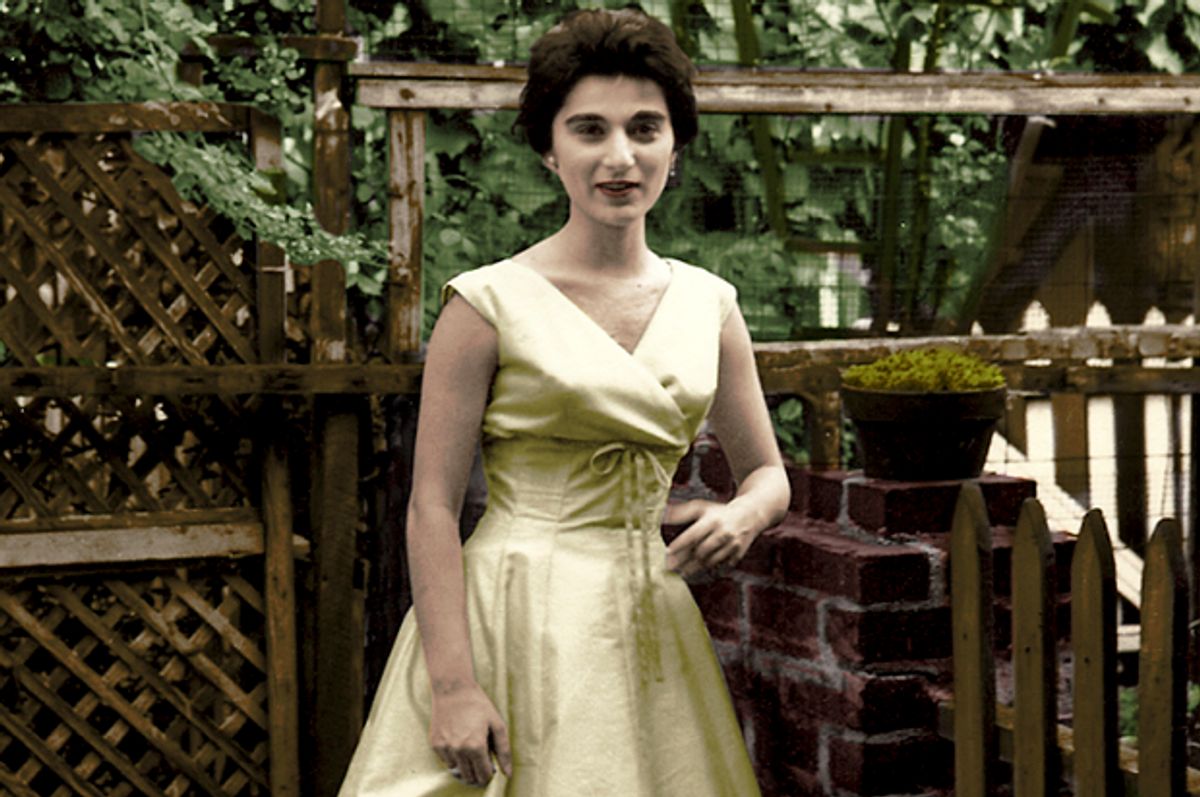 While the media these days counts bullets fired in unjustified shootings, the journalistic landscape was vastly different a little over half a century ago, when the New York Times reported that a Queens resident by the name of Kitty Genovese had been stalked and stabbed to death in full view of 38 neighbors who chose to look away rather than call the police. Suddenly, those 38 do-nothing eyewitnesses, like shots fired, morphed into legend, shorthand for urban apathy (even after the notorious number had been debunked years later) – and continuing down in time to that "Girls" episode in April, Kitty's killer dying in prison mere days before the show aired.

But James Solomon's "The Witness" is not about the myth of the 38. Instead, the doc focuses on Kitty's life, and the dogged search for the hard facts surrounding her death by her brother Bill, who was only 16 at the time she was murdered. William Genovese was kind enough to chat with Salon shortly before the film opens at NYC's IFC Center on June 3.

To me, one of the most disturbing scenes in the film was your interview with A.M. Rosenthal, who wrote "Thirty-Eight Witnesses: The Kitty Genovese Case," and was able to shape the narrative of your sister's murder through his powerful position at the New York Times. I just felt that he was surprisingly condescending, that he couldn't understand why – with so much positive change in the world resulting from the (crafted) story of Kitty's death – you'd want to question the veracity of that narrative. I mean, a Pulitzer Prize-winning journalist should be lauding your inquiries! So what's your take on Rosenthal – and media manipulation in general? Does he have a point about journalism serving some sort of "higher, bigger picture" purpose?

Rosenthal, generally, was, I thought, pretty forthright. Of course, the story of 38 eyewitnesses has clearly been debunked many times over – including by the Times itself. The fact that a lot of people did hear – that it was toward the end of winter, March 13, and buildings in that era, often the apartments did not have separate controls on the heat. People would have their windows cracked open. They were single-pane glass in those days. It's arguable that maybe 50 or 60 people actually heard it. There were witnesses who testified to hearing, "Help, help I'm dying" and "Help, help I'm being stabbed."

But in terms of Abe Rosenthal saying it was a good story that was important to get out – well, that's pretty subjective how anybody might think about that from a reporter's point of view. My opinion is that reporters shouldn't be concocting stories to make a moral play out of it. But he was the city editor at the time, so maybe he felt that he was allowed to do that. Because he was getting information from the police chief that they were having this phenomenon that the citizens were not helping the police as much as they used to help the police. Now remember, this was a Rosenthal who came back to the city as an editor after he'd been overseas for a time, so he was getting reacquainted with the city. So he would have lunch or breakfast with the police chief – once a week or once every two weeks – something of that order.

So when he was meeting with the police chief after the murder, the chief said to him, "Wait till I tell you about this one." And that's when Rosenthal sent people to check the story out – because it had been in the Times two weeks before that as a three-paragraph, "somebody was murdered" kind of thing. And then two weeks later it got to be the front-page kind of deal.

By the way, we also got police logs from the time that said the only person who called was Karl Ross. Ross was the guy at the top of the stairs who was a friend of Kitty's and her roommates, who had to go across the roof to ask a friend what he should do. Ross called after Moseley had left, and my sister was probably dead. So the police logs contradict what that woman Hattie (a subject in the documentary who claims she called the police, only to be told that they'd already received several calls) said.

Also, what wasn't in the documentary was a gentleman by the name of Hoffman, who signed an affidavit saying that his father called the police. Hoffman, when we talked to him, was a retired NYC police cop – a lieutenant – who claims that he saw what was going on out the window, told his dad, and his dad called the police.

Wow. This is like falling down a rabbit hole. Which also makes me wonder if you feel any solidarity with other relatives of murder victims – Matthew Shepard comes to mind – whose loved ones have been transformed from flesh-and-blood humans beings into abstract symbols (perhaps at the price of facts)?

Look, my personal philosophy and belief is that there is one universal spirit, and that's what enlivens all of us – so I feel empathy for everybody. But I don't get churned up about things because my philosophy is, I handle what's in front of me to the best of my ability.

Sure, I always feel empathy for people whose humanity disappears, but in my sister's case it became so much, and it was so long-lived, that her name was attached to apathy, particularly apathy in NYC. So many people knew of the story, so many people I bumped into in my life, when I said the name Genovese – when they were not even from the tri-state area – they knew the name Kitty Genovese. I understand that her life, the spirit that we held onto as a family, didn't mean anything to them. It's just these 32 minutes of being stalked and killed that they know. Part of the goal of the documentary was to give her life, to show that she wasn't just this murder victim.

Interestingly, your sister's death again made headlines last month when "Girls" used the media version as a storyline (and surprisingly, Kitty's killer died days before that episode aired). Do you have an opinion about the show perhaps perpetuating the myth?

It's funny how that worked out. I'd never seen "Girls" before, but one night, about a week after (co-producer) Melissa Jacobson told me about the episode, I just per chance bumped into it five minutes after it started when I turned on HBO. So I did catch it. But to me, it was almost like background wallpaper. Because it was like a recreation, people were at a party, it was a social experiment. It was like a sentence you'd read in a book – and then that sentence was the theme for a party. It wasn't offensive to me. But has the story slipped into being very mundane? I don't know. It wasn't anything earthshattering to me.

I'll tell you what was more disturbing to me. There was this NY Daily News article by this guy Matthew Hennessey headlined, "Kitty Genovese rests in peace: Her Connecticut gravestone unkempt." To me, it's like, our plot there is private property. And we have always left the stone unkempt – because people come traipsing through there – so we like to keep it covered. It bothered me more because it was somebody, this reporter, actually traipsing around and undoing the privacy our family wants. It's like, "Marilyn Monroe died. She was nude." Who was he to comment on something so private?

In the film you spoke about your sister's murder coloring many of the subsequent choices you've made in your life – but I'm also curious to learn whether you feel your service during the controversial Vietnam War may, in turn, have influenced your dogged search for the truth about her death?

When I was growing up, remember, we had a pretty clear-cut battle with monolithic Communism – or what we thought was monolithic Communism. I grew up with Kennedy asking, "Ask not what your country can do for you, but what you can do for your country." The Vietnam War was very small and tiny through the '50s, small special-forces units. With the zeitgeist I grew up in, my sister and I were very much into scientific and historical things. Kitty's boyfriend, who became her husband, who she subsequently divorced, was an army officer who was an engineer. So as she was going through high school, and he through college, she was helping him study, throwing all of her efforts into helping him.

So we grew up very much opposed to apathy. And then when she was killed and the story of the 38 eyewitnesses came out – it was almost like those 38 eyewitnesses had killed her versus Winston Moseley. When you're a 17 or 18-year old man or boy, or man-boy, with testosterone pulsing through your veins, and you're taught to stand up for what's right, it makes sense to join up.

Also, we can blame my sister for the fact that I was a questioning kid. She would inspire me to question. She would say, "I'm not sure about that. You need to look that up." So she started me on that path. And then, coincidentally, I joined the Marine corps, and I got sent off to language school and became an intelligence scout. So questioning is something that has been branded into my brain right through to this day.

Finally, it's quite striking that your many siblings, while supportive of your hunt for the facts about that tragic night, also seem to wish that you'd just let it go. So how have they reacted to the documentary? Has it brought you all closer? Further apart?

My siblings couldn't have been more supportive, but things bubble out. I think they've always been concerned about me, about how far I was going to take things. Even though Kitty was 12 years older than me, when she would come up to Connecticut on the weekends, usually Saturday nights we would stay up late and talk. Kitty and I just had more in common with each other. For me, after so many questions about the 38 eyewitnesses came out, it was absolutely the case that I had to get to the bottom of this.

Also, let me just add that the end result of doing the documentary – and anything else – is really to get people to ask, "On any given day, at any given moment, what do I owe my fellow man?"