West Point on Memorial Day: Race, one graduation photo, and the meaning of America

My relationship to my country has been complicated, but one #Blacklivesmatter photo really resonated 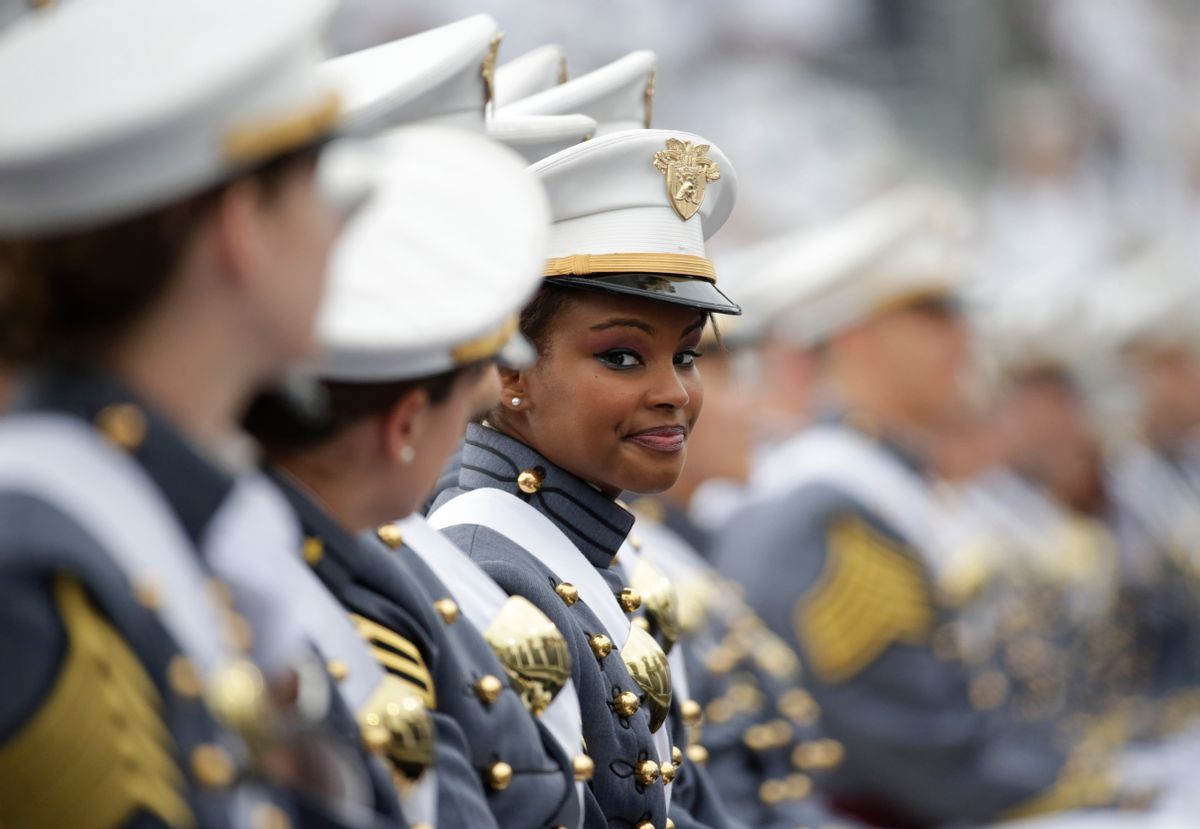 Cadets are seated during a graduation and commissioning ceremony at the U.S. Military Academy on Saturday, May 21, 2016, in West Point, N.Y. (AP Photo/Mike Groll) (AP)
--

My freshman year in high school, one of my drawing teachers assigned us to design the preliminary sketch of a sculpture that would reflect what America means to us. We were to complete the sketch by partnering with another student, asking what they thought the final sculpture should look like and drawing their description.

My partner was a 15-year-old black male. He told me, “I would put a big, black hole in the ground, because I feel nothing for this country but darkness and emptiness.”

I had heard adults I was close to say something similar in their knowing eye rolls, their head shakes and crossed arms as they muttered, “White folks,” at blatant injustice or disrespect and their warnings that we always had to be twice as good as any white person to expect half as much. But I had never heard anyone my age articulate his feelings of abandonment so bluntly.

I don’t remember what I described in return. I had trouble with the assignment; I couldn’t think of anything unique. I had neither my partner’s apathy nor other classmates’ grandiose imaginations of monuments. I envisioned something abstract but patriotic, like Escher’s Relativity in red, white and blue.

Today, I would say my idea describes my relationship to this country accurately. The sculpture would have appeared simple and ordinary at first, but look at it long enough, and a viewer would have seen it was a complex and confusing mesh of rules and directions that could leave you dizzy. It’s also appropriate  that I have no idea how such a sculpture would stand, because as a black woman in the U.S., sometimes I don’t know how I do.

I thought about the high school art assignment when I saw that a photo of black female cadets graduating from West Point Military Academy had sparked an official inquiry. As reported in the New York Times, the photo shows the women “on the steps of West Point’s oldest barracks … in traditional gray dress uniforms, complete with sabers,” and with their clenched fists raised. As the photo went viral, some viewers took offense. They “accused the women of allying themselves with the Black Lives Matter movement and sowing racial divisions,” according to the Times. West Point investigated whether the cadets violated Army regulations against engaging in political activities while in uniform.

Although the cadets will not be punished and in fact graduated on May 21, the inquiry continues to trouble me. The very action of an inquiry, prompted by assumptions that the women allied themselves with the Black Lives Matter movement, implied it's impossible to be proud of or have loyalty to blackness and simultaneously have loyalty to or pride in the U.S. The photo, in contrast, implies it’s impossible for black women in this country to thrive without both.

Granted, black people’s relationship to this country is complicated, especially for those of us whose ancestors were enslaved. This year, for the first time ever, I shed a tear when I heard “My Old Kentucky Home” played on Derby Day. That’s justifiable behavior for a Louisville native living far from home on what’s considered a state holiday, but it’s irrational for a graduate student who just completed a literature course on remembering slavery. The latter knows lyricist Stephen Foster set the story of Harriet Beecher Stowe’s abolitionist novel, Uncle Tom’s Cabin, to a tune. The latter knows the slaves are singing, “weep no more, my lady,” as they pine for Kentucky’s gentler brand of slavery after being “sold down river” to harsher conditions in Louisiana. The latter knows Stowe’s novel was powerful but flawed anti-slavery propaganda that reified racist tropes like the pickaninny and demanded Christ-like perfection of blacks before they were worthy of freedom. The Kentucky girl and the student together miss home but feel a deep and profound sadness for the ancestors whose humanity was so belittled that a lyricist thought there was an optimal way for them to be slaves.

Nonetheless, this black woman still calls Kentucky and these United States, “home.” I still feel pride in them and love for them. Even though I’m taken for granted by one of their main political parties. Even though we are consistently and disproportionately victims of state-sponsored violence. Even though no amount of historical evidence of the impact of anti-black, post-slavery injustices (Jim Crow laws, segregation, being systematically disqualified for government benefits, including benefits black men in the military served their country for) seems to quiet cries that black people are whiney and tend to be worse off than other racial groups in economic and health outcomes because we are lazy.

“Louisville, Ky proud,” my Twitter handle beams. “Welcome home,” a customs agent says as I reenter the U.S. after travel abroad. I say, “Thank you,” with a smile I feel in my heart. My loyalty is as inexplicable as the uniforms sixteen black female West Point cadets wear in their photo. Why would they volunteer to serve a country that’s done so much to them? Why would they willingly enter a space that’s 80 percent male and 70 percent white?

Why wouldn’t they? They belong there. They’ve taken advantage of freedoms afforded to them by amendments to the Constitution, gained via centuries of freedom and civil rights movements and not found in countries they may have to fight against.

To me, the more important questions are, why is any assertion of black identity interpreted as anti-white, and why is whiteness interpreted as American while black is not? Whether or not the women’s fist-raised gesture signaled affiliation with Black Lives Matter (and the investigation found that it did not), the gesture did assert the cadets’ black female identity. It acknowledged that in an overwhelmingly white and male space, they came as themselves and survived, probably by leaning on each other. If that sews seeds of racial division, the academy may as well be 100 percent white and male.

Instead, consider that of the women pictured, those whose ancestors were enslaved enrolled in a military academy to stand up for the country their people’s unpaid labor built into greatness, a country that depends on their people for its culture. They stand in their uniform, in their womanhood and in their blackness.

Sixteen black women in full traditional uniform, with sabers, standing on the steps of West Point’s oldest barracks and with their fists raised isn’t an affront to whiteness or to America. Their gesture shows that “unity, solidarity and pride,” are the elements of thriving in a space that doesn’t quite accept you but that you love, built and are a part of. The women’s presence at West Point, though tiny in percentage (1.6), is a step toward making the academy 100 percent American.