A far-right candidate almost took power in Austria; The U.S. is in danger of letting one actually win 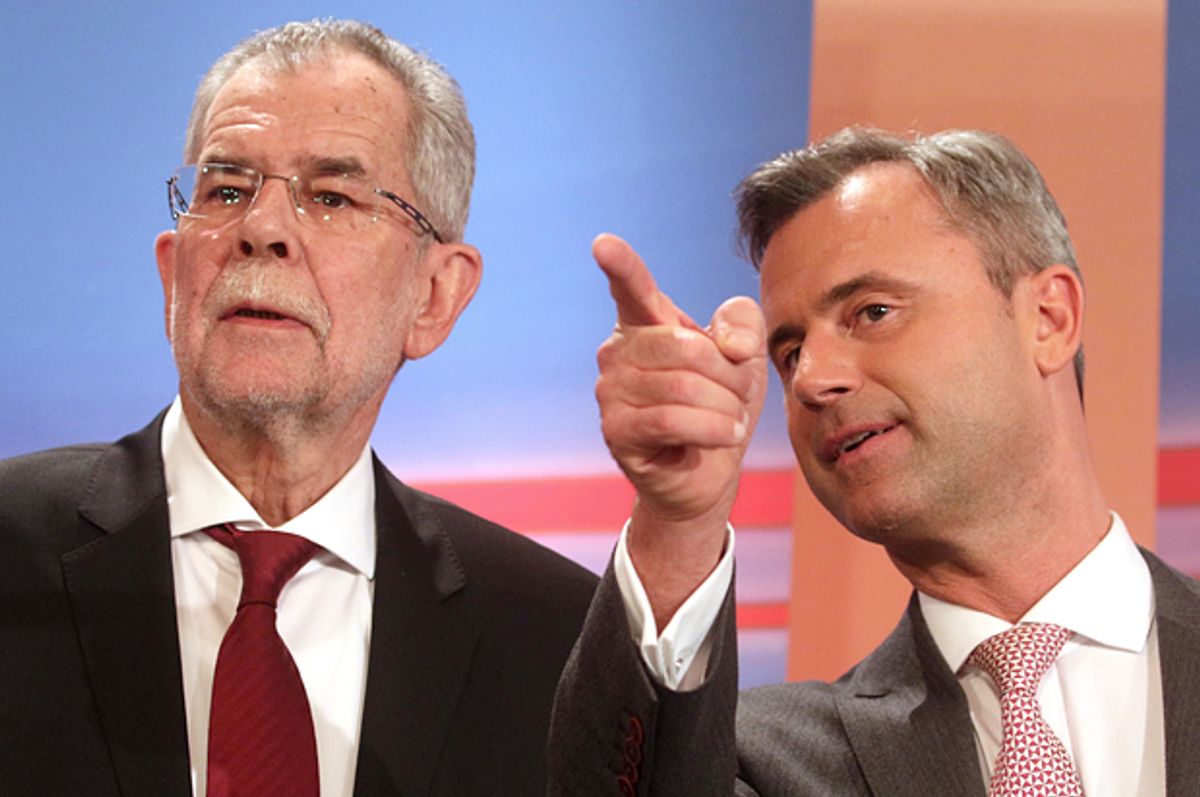 Until recently, he was a virtual political unknown. Now, following a surprisingly effective hard-right campaign for president, he’s one of the most popular politicians in the land. His pledges have included a vague commitment to protecting jobs, from trade agreements and foreigners, while Muslims, in particular, are according to him a hive threat to the nation and its way of life. Tighter border controls and deportations were promised. Divisive is the word: while he has enormous support from a disaffected hardcore, he’s also sparked protests. Some have even compared him to Hitler. His name is Norbert Hofer, and this week he almost became Austria’s new president.

At the end of the day, a mere 31,000 votes in 4.5 million prevented Austria’s own Donald Trump from taking the country’s highest position; just 0.6% of the total countrywide vote that on Monday stopped Austria from becoming the first European nation since the close of WWII to elect a far-right head of state. Instead, the presidency was given to Hofer’s rival, former leader of the Austrian Green Party Alexander Van der Bellen (the hard swing to the other end of the political spectrum further evidence, if it were needed, of the current precarious state of global politics). Austria was saved, though as the Guardian’s Owen Jones put it, that Hofer came so close is no cause for relief – it’s a reason to panic. For everyone. And America is no exception.

There are many parallels between Donald Trump and Norbert Hofer. Hofer, like Trump, has cried foul when a result hasn't gone his way, before later backtracking under scrutiny (a Trump specialty by now). Hofer has also, like The Donald, shown bizarre hostility to an immediate neighbour: where Trump demands Mexico pay for a wall dividing it and the US, Hofer wants Italy to simply up and hand a piece of former Austro-Hungarian territory over to him. Even Hofer's campaign slogan, “putting Austria first,” echoes Trump's own “Make America Great Again.”

It can no longer be denied that there's something in the air. Trump and Hofer aren’t exceptions, but two individuals representing a global shift to the right. Not only in Europe, where UKIP (Britain), Front National (France), the AfD (Germany), Party of Freedom (the Netherlands) and the SVP (Switzerland) are all steadily surging. Israel just elected the most right-wing government in its history; two weeks ago the people of the Philippines made Rodrigo Duterte, known as “the Asian Donald Trump,” their president; even famously left-leaning South America has jolted rightward, putting an end to its so-called Pink Tide. The whole world, so desperate in these unstable times, is developing a taste for right-wing politics. America is no exception.

Norbert Hofer alone wouldn’t have changed the world. Austria isn’t such a power that a far-right president there could have greatly impacted global politics. Donald Trump, on the other hand, is vying to be president of the most powerful nation on Earth, and there’s enough reason to think he could do it. Not just because the entire planet generally appears to be moving in that direction: In crucial swing states like Florida and Pennsylvania, neither Trump nor Hillary Clinton have significant enough leads for anyone to confidently predict the outcome there, while in national polls Trump is now actually slightly ahead of his likely Democratic rival. As much as we hope we’ll be saved before November comes, we must now believe that President Trump is possible.

Der Spiegel's definitive article from early in the year, ‘Donald Trump Is the World's Most Dangerous Man,’ reads: “his candidacy ceased to be amusing long ago. Trump's demands are too extreme for that, and his view of the world and humanity too dangerous…Some polls show that Trump even stands a realistic chance of winning the White House in a possible face-off with Hillary Clinton.” This was written back in February, before any votes had even been cast, and still at no point do we appear to have come round to heeding the message. Why, exactly, are we still laughing?

We're just that sure that Donald Trump can't be president. Trump’s America sounds too ridiculous to those of us who run in progressive circles, and the paranoid, conspiratorial right-wing media doesn't penetrate here. Confirming the gut feeling of those of us in the liberal bubble are the pundits, who share our apparent certainty that Trump can’t win, confident that their incorrect earlier predictions that Trump would drop out early, would take no states, would never in a million years take the Republican nomination, were just blips. Trump is too extreme, too hateful, too dangerous, and we supposedly civilized Westerners are too educated in the perils of the far-right to make him the next president of the United States.

Perhaps what just very nearly happened in Austria is the wakeup call we need. Austria is not just any European country. Small it may be, but there's significance in a far-right president almost taking power there. This is the birthplace of fascism, Hitler's own country of origin; a state which was happily annexed by Nazi Germany in 1938, and was comfortably part of the Third Reich until its downfall seven years later. The Austrian people will understand better than most the dangers of the far-right. Some who lived through it are still alive there today. And despite that, the Austrian people just almost handed their country over to a man promising to make life better by punishing minorities and the marginalized. If it could happen there, it could happen anywhere. And America is no exception.