Julia Louis-Dreyfus, greatest of all time: The "Seinfeld" and "Veep" star is the best TV comedy actor, hands down 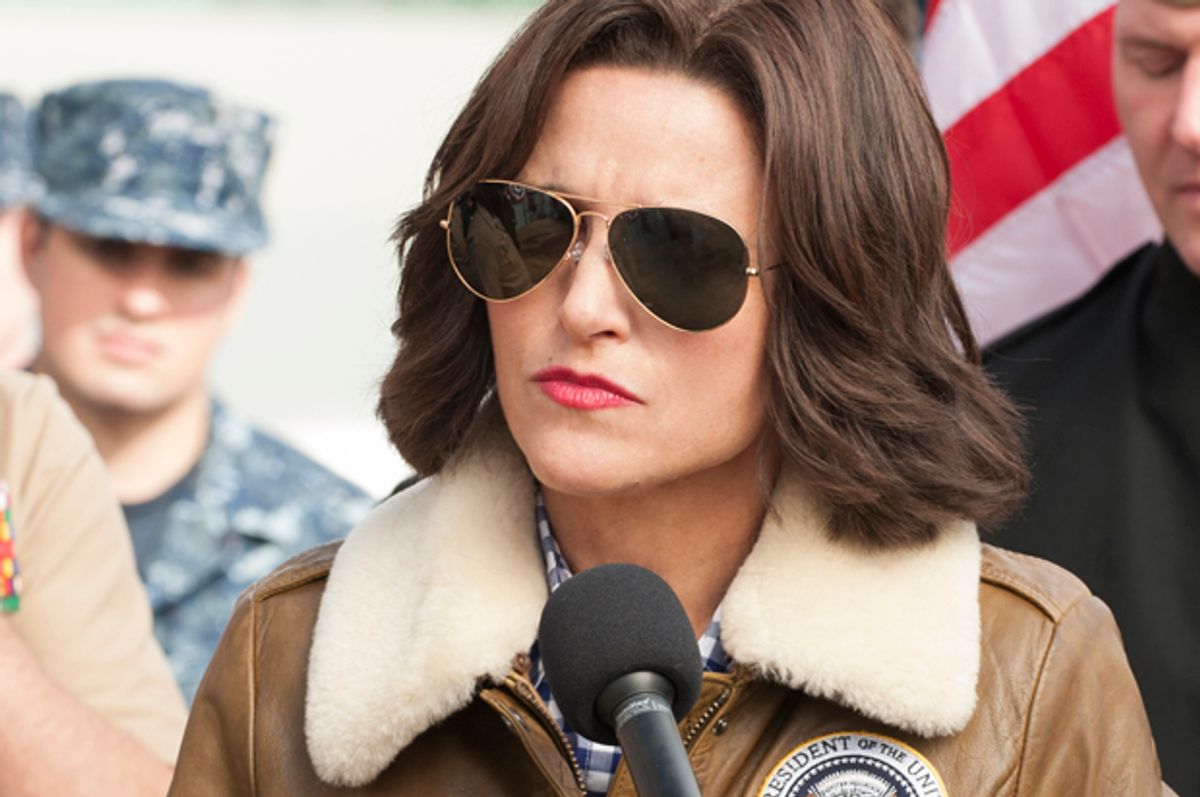 Despite the 11 championships of Bill Russell, the preposterous scoring prowess of Wilt Chamberlain, and the unprecedented total-packageness of LeBron James, Michael Jordan is considered the best basketball player of all-time, thanks to his lengthy resume of championships, MVPs, dunks, clutch shots, and devastated victims. It’s hard to think of another sport or field with such a clear-cut GOAT (greatest of all time). But after watching the recent “Veep” episode “Mother,” I realized something: Julia Louis-Dreyfus has established herself as the greatest comedic performer, male or female, in the history of television. She’s the Michael Jordan of TV comedy.

I don’t make such a grandiose claim lightly, though making grandiose claims lightly is as common on the internet as posting pictures of your face. But with “Seinfeld” under her belt and “Veep” in progress—not to mention a career full of wonderful short-term performances—Louis-Dreyfus has passed the likes of Carroll O’Connor, Roseanne Barr, Lucille Ball, Alec Baldwin, Ted Danson, Carol Burnett, Garry Shandling, and David Letterman. No one can match Louis-Dreyfus’ boob-tube resume, thanks to her remarkable range, demonic commitment to character, and consistent ability to use ridiculous comedy to explore some terrifying psychological depths.

As Elaine Benes, Louis-Dreyfus was part of the greatest comedy quartet ever and likely the greatest sitcom ever. The ginormous “Seinfeld” audience—76 million viewers for the finale, an unfathomable number in today’s fractured TV world—guarantees that she’ll always be remembered for hundreds of highlights. I can improve my mood at any moment just by thinking about Elaine failing at buying Mr. Pittman a proper pair of socks, tossing George’s hairpiece out the window, shouting “Stella!” while on muscle relaxants, cracking open a beer in Jerry’s apartment, and, of course, dancing. It would have been so easy to fade into the background next to Michael Richards’ manic energy and Jason Alexander’s twisted narcissism, but Louis-Dreyfus more than held her own, bringing crackling energy and complete commitment to the big and small moments. Nothing was (or is) outside Louis-Dreyfus’ comedy wheelhouse.

But that was just the beginning of her career as a comedy immortal. There used to be a supposed “Seinfeld” curse, which allegedly wielded a voodoo like power over the careers of Louis-Dreyfus, Seinfeld, Alexander, and Richards. While Alexander’s flopped sitcoms and Richards’ standup meltdown supported that theory, Seinfeld continued being one of the best standups without missing a beat, and “Comedians in Cars Getting Coffee” has been wonderful. But Louis-Dreyfus best disproved this superstition, first with the CBS hit “The New Adventures of Old Christine.” While not as revolutionary as “Seinfeld” or “Veep,” that show was a strong network comedy that proved she was no one-sitcom pony.

Louis-Dreyfus’ post-“Seinfeld” and pre-“Veep” career had many other highlights, deepening her comedy resume. She blew minds in a brief appearance as Liz Lemon on a live episode of “30 Rock,” establishing once and for all the straight line between her comedy genius and Tina Fey’s. In four episodes of “Arrested Development,” she stole a show that was hard to steal as compulsive liar/lawyer Maggie Lizer. Louis-Dreyfus excels at portraying despicable characters, and Lizer, who faked blindness and pregnancy, was deliciously bad. More recently, Louis-Dreyfus celebrated her “Last Fuckable Day” on “Inside Amy Schumer,” establishing her kinship with another great TV comic and commenting on the sexist awfulness of a business she has transcended. The diversity of these roles parallels the diversity of Louis-Dreyfus’ talents, and she improved every show she graced.

But everything in Louis-Dreyfus’ career, even Elaine Benes, now feels like a preamble to the role of Selina Meyer, the petty, narcissistic Vice President, then President, who has all the faults and foibles of an average person and all the hubris and greed of a monster. “Seinfeld” was a deep cut into humanity: through the endless poking at social etiquette and our petty obsessions, the writers and actors exposed the tragic comedy of our lives. But “Veep” cuts deeper and wider. It’s one thing to laugh at how the people down the hall or in the coffee shop are shallow self-obsessed jerks with no morality or even humanity. It’s some next-level comedy to show that people in power are also, as the kids say these days, garbage people.

Though any episode of “Veep” showcases Louis-Dreyfus’ vast gifts, “Mother” is the pinnacle (so far). In the episode, Meyers is President, but only because the previous President resigned. Her recent attempt to get elected on her own was too close to call, and she’s awaiting the results of a recount in Nevada. Meanwhile, her mother has a stroke. The episode shows Meyers bouncing between the demise of the mother she clearly despises (but must to pretend to mourn) and the possible demise of the Presidency she obscenely craves (but must pretend to not need with a fiery passion).

This juicy scenario allows Louis-Dreyfus to show off her full menu of skills and possibly invent a few new ones. In this packed episode, she nails bits such as mispronouncing a doctor’s name, shilling for wind power, insulting her press secretary, mistaking supporters for protesters, and dismissing her daughter’s grief (“Oh, wow, that is loud, honey.”). Her body language is priceless as she contemplates taking her brain-dead mother off the respirator, then walks away in the manner of someone strolling around the mall. As she tries to pray—with aide Gary feeding her lines, as always—a plea for her mother turns into a shameless pitch to win the contested election. It’s the funniest prayer since Will Ferrell’s endorsement-laded soliloquy to the “wee baby Jesus” in “Talladega Nights.”

Most of the moments are small, which is typical for the show, but in this episode, Louis-Dreyfus gets to go big. Just after the ventilator is removed, Louis-Dreyfus receives good news about the recount, causing her to laugh hysterically: this gleeful cackling is then witnessed by her horrified daughter, who wasn’t even given a chance to say goodbye to her mee-maw. Louis-Dreyfus is possessed by a comedy demon when she exclaims, “We got good news—from Nevada!” Watching a crazed, laughing Meyers hug her despondent, crying daughter as Mee-maw’s corpse is still warm is literally hysterical. Black comedy has rarely gone so far into the abyss.

Throughout the episode—just like her career — Louis-Dreyfus nails everything from subtle microexpressions to outsized wails, expressing madness for power, brutal psychological damage, petty sarcasm, and denial-drenched grief. The writing is terrific, but at the risk of ruining my basketball metaphor, Louis-Dreyfus is a one-woman comedy orchestra. If there’s anyone who can do the things she’s done, I haven’t seen ‘em.