When "X-Men: Apocalypse" fails its heroes of color, it fails the "X-Men" spirit

For an allegory for racial equality, the "X-Men" films have a hard time not sidelining their non-white characters 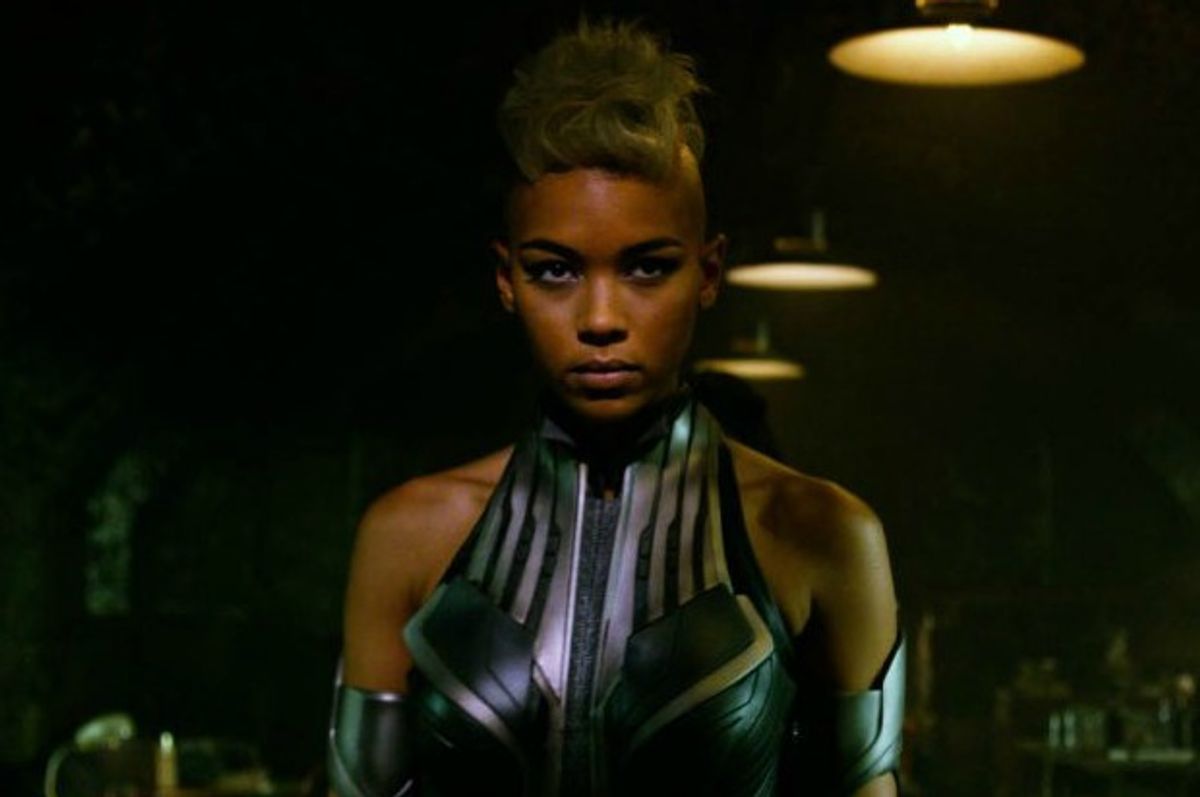 Apocalypse, the all-powerful villain in “X-Men: Apocalypse,” seems to want what every by-the-numbers megalomaniac wants: total destruction. The screenplay, written by Simon Kinberg (of “Fantastic Four” infamy), explains that Apocalypse (also known as En Sabah Nur) was the first mutant, an Egyptian tyrant who was betrayed by his followers and sent into a millennia-long coma. After awakening from his nap, Apocalypse immediately begins assembling a team to destroy the world—and create a better one in its place. If you’ve seen enough of these movies, you know the drill.

Because Apocalypse is a god—or believes himself to be—that makes his quest rather dull. Gods, after all, don’t have interiority or real motives. But what compels those around him to join his fight? After meeting Storm (Alexandra Shipp) and Psylocke (Olivia Munn), the two mutants immediately agree to join his end-of-the world plan. Kinberg’s script explains it away as a product of Apocalypse’s persuasive powers (it might be best summed up as “blah blah blah mind control”), but author Junot Diaz offers a more compelling explanation. “If you want to make a human being into a monster, deny them, at the cultural level, any reflection of themselves,” the Pulitzer Prize-winner famously said. On this front, the film more than succeeds.

“X-Men: Apocalypse” has an enormously expansive cast—likely the largest of any X-Men outing yet. The movie counts 14 mutants, four of whom are people of color. In addition to Psylocke and Storm, there’s Jubilee (Lana Condor) and Apocalypse himself. The film’s antagonist is played by Oscar Isaac, the Guatemalan American actor who had a game-changing year in 2015. His roles in “Ex Machina” and as an ambiguously gay pilot in “Star Wars: The Force Awakens” (depending on what fanfic you read) made Isaac into a household name. Despite the actor’s A-list status, he barely appears on screen in the film. Isaac is shown for a handful of seconds before viewers see him transformed into Apocalypse—in which his dreamy, matinee idol mug is hidden by heavy prosthetics.

Watching Isaac channel his inner Ivan Ooze, it’s difficult not to think of Zoe Saldana, who has been a staple of this century’s science-fiction franchises while rarely being allowed to show her face. As Vulture’s Kyle Buchanan points out, “Saldana has already played green in ‘Guardians of the Galaxy’ and blue in ‘Avatar,’” but outside of “Star Trek,” the Afro-Latina actress rarely gets to be black. The same fate has befallen Oscar-winner Lupita Nyong'o, who has expressed her aversion to playing the small, stereotypical roles too often allotted to black actors. Instead she’s played a wolf mother in the live-action “Jungle Book” adaptation and a wizened space crone alongside Isaac in J.J. Abrams’ “Star Wars” reboot.

Notably, it’s women of color who get off even worse in “X-Men: Apocalypse.” While they are allowed to actually appear on screen, it’s in ways that are shockingly rudimentary. Who is Psylocke? In the comic strip, she’s an agent in S.T.R.I.K.E.'s Psi Division and a gifted precog (yes, like “Minority Report”). In “Apocalypse,” however, Betsy Braddock is reduced to “badass eye candy,” as one critic put it. She wields a psychic whip and wears insanely cool leg straps, but Psylocke has little agency, backstory, or dialogue. Despite ample “Daily Show” cred, Olivia Munn gets almost no lines. Alexandra Shipp, taking over Storm from Halle Berry, has equally little to do; her role as one of Apocalypse’s henchpeople is to sit on the sidelines and watch things happen.

What’s depressing is that the casting announcements for Shipp (who is black) and Munn (who is biracial — her mother is from Vietnam, of Chinese descent) caused undue elation on the Internet, because it seemed as if “X-Men” was finally fixing a problem that had hampered the series since its 2000 debut. Despite sporting massive ensembles that give them immense room for diversity, the films are dominated by straight, white men. “‘Days of Future Past’ had an extended cast of ‘Game of Thrones’-like proportions, but only one of the main characters was a woman,” the Daily Dot’s Gavia Baker-Whitelaw explains. “All of the characters of color were restricted to backup roles in the dystopian future scenes: A lengthy fight sequence where all of the meaty storytelling remained in the hands of Magneto and Professor Xavier.”

Although Storm and Rogue had major roles in “X-Men” and “X2,” their contributions were deemphasized as the series developed—with Rogue being cut out of “Days of Future Past” almost entirely. (She appears in a brief cameo at the end.) Although characters like Sunspot, Warpath, Bishop, and Blink made appearances in the previous mutant-time-travel offering, their characters could have been absent from the film entirely and it would have changed the plot of “Days of Future” past very little. This is despite the fact that Omar Sy, the French actor who plays Bishop, and Chinese actress Fan Bingbing, who was cast as Bishop, are huge deals in their home countries. Actually, Sy is a superstar basically everywhere: He starred in France’s “Les Intouchables,” which, in 2012, became the highest-grossing non-English language movie ever.

But these actors appear to be tapped to generate excitement rather than to use their presence to tell interesting stories. After it was announced that Lana Condor would re-introduce Jubilee into the “X-Men” film franchise, the move signaled that the cinema would be getting its first true Asian superhero. Jubilee, a mallrat who shoots fireworks out of her hands, is a fan favorite, but she factored into the original “X-Men” trilogy in a very, very small role. (Full disclosure: I barely remember her being in them.) “X-Men: Apocalypse” does little to rectify that, and that’s a shame. As Condor told Paper magazine earlier this year, the character is extremely powerful for Asian-American fans. “Jubilee gets to represent the Asian outsiders who have really haven't had the easiest time fitting into society,” the 19-year-old actress said.

As Angelica Jade Bastien wrote in a review of the film for RogerEbert.com, it’s “deeply troubling” that the X-Men series continues to “[trade] in the language and ideas of the Civil Rights Movement without caring one iota about its characters of color.” That linkage is not an accident: The comics are overtly an allegory for racial equality. “X-Men” No. 1 hit shelves in 1963, a year before the passage of the Civil Rights Act. According to Lee, he wanted to explore societal marginalization and the status of outsiders, calling it a “good metaphor for what was happening with the civil rights movement.” Lee told The Guardian, “Instead of them just being heroes that everybody admired, what if I made other people fear and suspect and actually hate them because they were different?”

The film series, however, has doubled as both a civil rights metaphor and an allegory for queer liberation—in ways that are extremely overt. In “X2: X-Men United” (which many believe to be the franchise’s best entry), Iceman (Shawn Ashmore) comes out to his family as a mutant, a scene in which they could easily be discussing something else. “Have you ever tried not being a mutant?” his mother asks. Many young LGBT folks have probably heard a version of that question. In “Days of Future Past,” director Bryan Singer (who is bisexual) is even less subtle. Whitelaw explains, “Magneto dons his maroon cape and helmet, floats up above the White House in front of dozens of TV cameras, and urges closeted mutants to literally ‘come out.’”

These themes, however, remain little more than subtext. While the “X-Men” films might draw on the experiences of racial minorities and LGBT people for inspiration, these groups rarely get play a major role in telling their own stories. This is true not just of Singer’s series: People of color are routinely whitewashed in comic book movies, with more bankable white actors cast in their place. In the Batman comics, Ra's al Ghul is Middle Eastern. He was played, though, by the Liam Neeson in “Batman Begins,” who was born in Northern Ireland. The Anglo-Scottish Tilda Swinton will appear as The Ancient One in “Doctor Strange,” despite the fact that the character is Asian.

By eliminating these characters from their own movies, it also serves to erase the histories they represent. Director Matthew Vaughn and his screenwriting team set “X-Men First Class” in 1962, the year of the the Cuban Missile Crisis. But as Ta-Nehisi Coates argues, it was also a pivotal year in the movement for racial equality. In a powerful essay for the New York Times, Coates writes, “That was the year South Carolina marked the Civil War centennial by returning the Confederate Flag to the State Capitol; the year the University of Mississippi greeted its first black student, James Meredith, with a lethal race riot; the year George Wallace was elected governor of Alabama.”

This erasure serves as an act of forgetting, one we pass down to the generations of young people who will grow up without the referent to the lived struggles the “X-Men” represent. Coates, who counts himself a lifelong “X-Men” fan, recalls seeing “First Class” with his young son, struggling to explain the context of what they have seen. “How do I speak of the Sentinels whose eyes melt history, until the world forgets that in 1962, the quintessential mutants of America were black?” he asks. Viewed in that light, it seems that real monsters of the “X-Men” franchise are not the mutants at all. The actual villains are those who continue to render those realities all but invisible.