The disaster that would be Vice President Newt Gingrich: Giving him the power he's hungry for is downright dangerous

No one is better at abusing power in D.C. than Newt — he'd be yet another reason America needs to reject 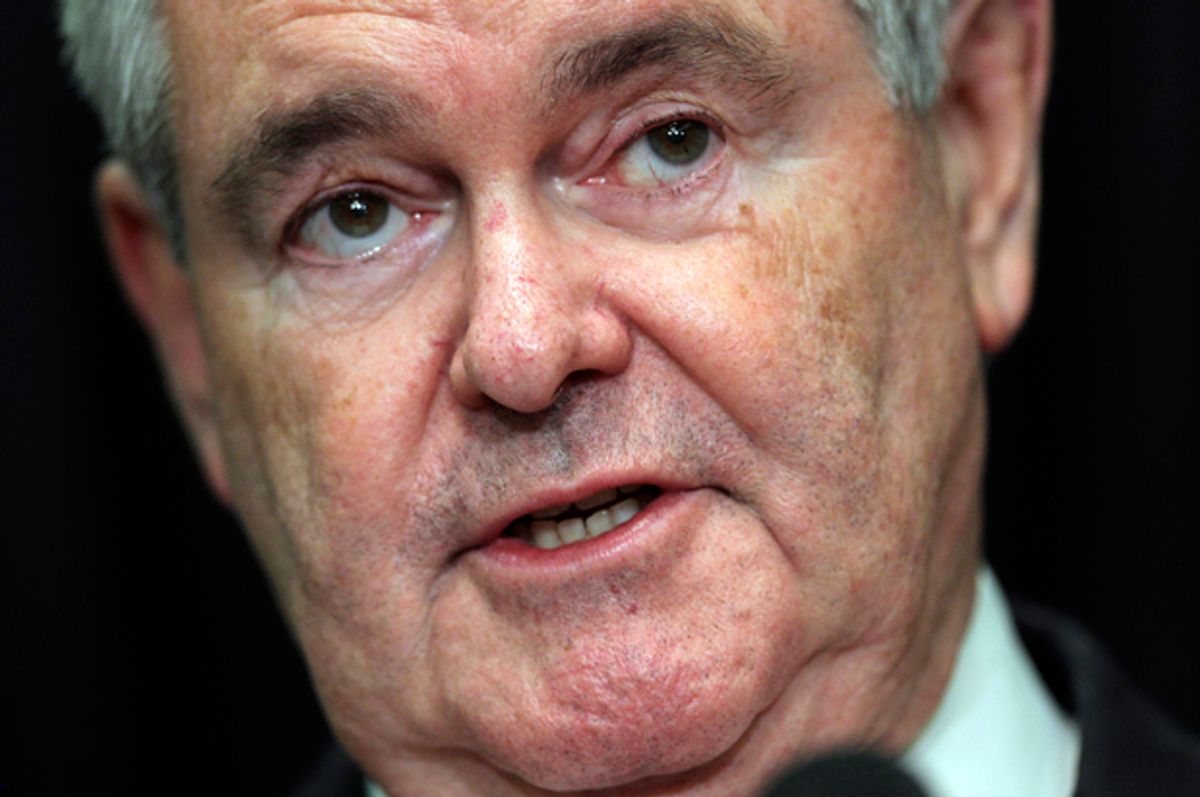 Give Newt Gingrich credit for knowing how to play the long game. The congressional back-bencher spent years amassing power in the House of Representatives in order to position himself to take the Speaker’s job when the moment was right – in his case, after the Republican Revolution of 1994. Now, seventeen years after an ungainly fall that resulted in his resigning from Congress under a dark cloud of ethics violations, the future Moon Emperor is aiming to return to power, this time in the executive branch, possibly as vice president in Donald Trump’s administration.

Gingrich taking the No. 2 job in the Trump White House makes sense for all sorts of reasons. Trump himself has expressed a need for a VP who knows Washington well and can be an effective liaison with Congress. Paul Manafort, his campaign chairman, told the Huffington Post the other day that:

He needs an experienced person to do the part of the job he doesn’t want to do. He seems himself more as the chairman of the board, than even the CEO, let alone the COO.

Gingrich obviously fits that bill. Even after resigning his Speakership, he stayed in Washington, where he has continued to work on policy as a fellow at conservative think tanks like the Heritage Foundation and a consultant, both formal and informal, to Republicans in Congress and members of George W. Bush’s administration. He has served on the Council of Foreign Relations and worked, in 2005, with then-Senator Hillary Clinton on a bill to build electronic databases of patient info that would replace the cumbersome paperwork that burdens doctors and hospitals.

He is, in short, the ultimate Washington insider. Having failed in his own presidential bid in 2012, he could be the No. 2 man in an administration headed by a president who will have little interest in details, and would be more than happy to delegate responsibility to underlings, so long as he still gets all the glory and can pretend to the public that everything is due to his hard work.

Give Gingrich credit as well for recognizing an opportunity and knowing how to exploit it. While it has become fashionable to snicker at former Trump rivals who are now falling all over themselves to supplicate themselves before the mogul’s throne, Gingrich has very quietly insinuated himself into Trump’s inner circle, becoming a trusted adviser to the campaign. According to National Review, he has also put his “fingerprints” all over Trump’s newly established Washington campaign office. Even back before the last of Trump’s rivals had dropped out of the primary, Gingrich regularly appeared on Fox News to tell its audience that the race was over and the real estate mogul had won. And last week he was sucking up to Trump with meaningless data points.

National Review also reports that Gingrich “will have a hand in” every policy effort that Trump is rolling out. Since Trump seems to have little interest in details or coherence, you can bet that these policies will have a Gingrichian flair.

Gingrich might have a titanic ego and a startling amount of self-regard even for a city as full of egomaniacs as Washington, but he has been around long enough to know how to wield real power. Having long dreamed of remaking America in his own image, it would not be a surprise to find out that he not only sees the second-highest position in government as the route to do so, but also thinks of himself as such a master wheeler-dealer that he, alone among the rest of humanity, could manipulate a vain and insecure jerk like Trump.

Gingrich is also too smart and canny an operator to get marginalized as vice president, despite the popular perception that the office is, in the infamous words of John Nance Garner, “not worth a bucket of warm piss.” And he’s got too much of an ego to settle for working as Trump’s chief of staff or a close adviser, even though he might arguably be even closer to the Oval Office that way instead of running his own corner of the administration. As vice president he’d have some public visibility while maintaining plenty of influence behind the scenes.

Think Dick Cheney with a larger ego and a toddler’s head bobbing atop a body that resembles a stuffed polar bear, and you’ve got Newt Gingrich’s vice presidency.

We have all been so busy focusing on a Hillary Clinton presidency marking a return to the battles of the 1990s, we have missed that one of her husband’s chief antagonists from that era is making his own bid for a comeback. Having called the House Republicans “cannibals” when he resigned in 1999, it’s hard to believe Gingrich sees the current group as being any better. And he would still need Republicans in Congress to pass any legislation. But given his known propensity to view himself as a world historical figure, it would not be a surprise to find out he sees the vice presidency as a redemption of sorts.

The only blind spot for Gingrich here is that he may not recognize that the more the public sees of his oleaginous smarm, the less it tends to like him. With such an unlikable figure as Trump atop the ticket, it would be one more reason to not vote Republican this year. As if there were not already several million.