The limits of white compassion: Imagine if Black lives mattered as much as one gorilla's

Harambe's death is a tragedy—as are the deaths of Black people killed by police. They deserve your outrage, too 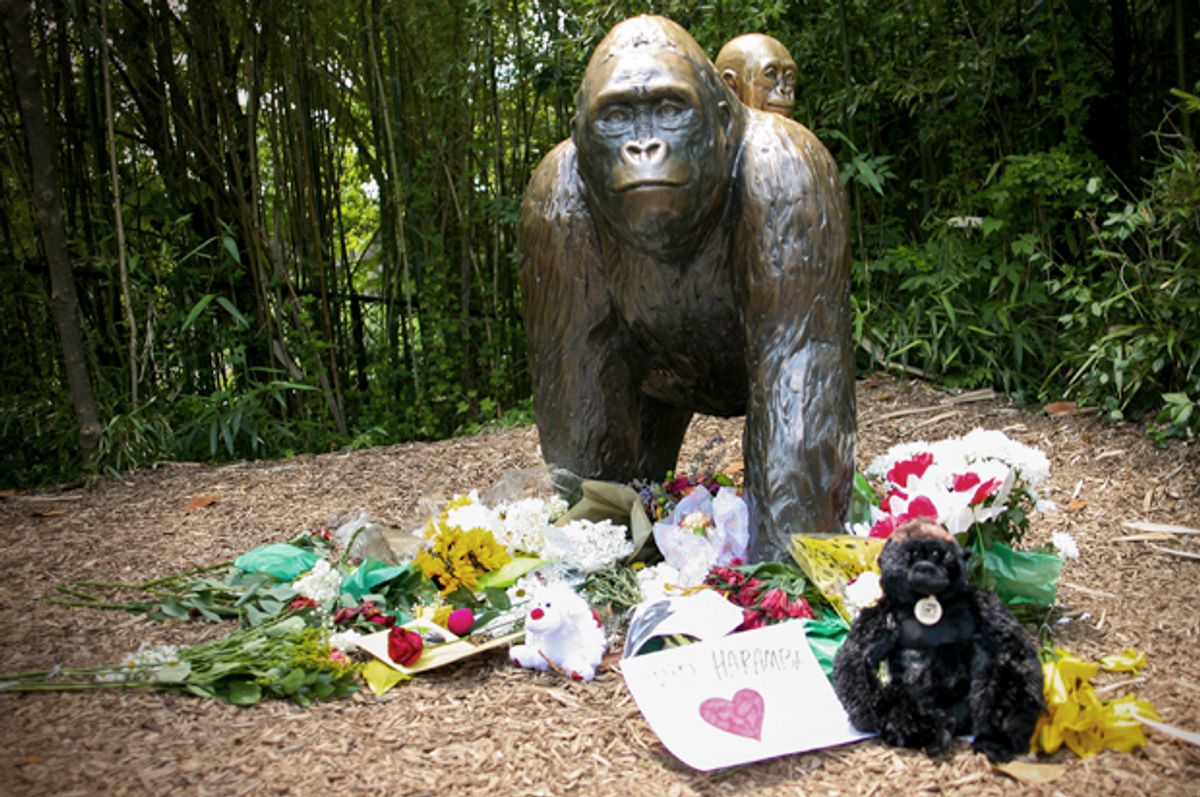 Flowers lay around a bronze statue of a gorilla and her baby at the Cincinnati Zoo, May 30, 2016. (Reuters/William Philpott)
--

Over the past few days, my Facebook Timeline has been filled with fellow Cincinnati natives weighing in on the Cincinnati Zoo & Botanical Garden’s decision to execute a silverback gorilla named Harambe, thus ensuring the safety of the small child who fell into the gorilla’s habitat. If people are reacting out of the compassion we are taught to exercise toward non-human animals, the “passion” root is equally present: people of various ages, races, and general points of view are hurt and angry over Harambe’s death. They call for apology, for petition, for policy change, for the parent of the fallen child to be held responsible somehow. It’s not okay to kill a gorilla.

The people are passionately compassionate—and with effect. The story is hitting national media; yesterday my partner caught footage of the encounter on CNN. Clearly, it matters how people feel, what they say about what is happening around them; their questions and their demands. In turn, the Zoo has defended its actions while lamenting its loss. Various experts have put forth their now moot prognoses of Harambe’s possible actions. There’s buzz, and meaning, memes, and some strange sort of solidarity in the air.

For centuries, Black people—specifically Black men—and gorillas have been linked, however latently, however insultingly, and definitely vividly since at least "King Kong"’s 1933 entrance into the cultural imagination. You know — the primitive monster who threatens both the sanctity and safety of the prodigal white woman. The same sort of beast that Flannery O’Connor, in her 1952 story “Enoch and the Gorilla,” describes as “hideous and black”: two words an inculcated dyad for those of us Black in an anti-Black society, reflected in a beast that supposedly reflects us.

But, back to Black people, yeah? I was born and raised in Cincinnati. I remember, albeit fuzzily, the 2001 race riots following the police killing of an unarmed Black man named Timothy Thomas. By the August 2015 killing of unarmed Samuel DuBose (instigated, incidentally, by DuBose’s lack of a front license plate), I’d left the city; I didn’t even hear about the February 2016 killing of Paul Gaston. Truthfully, after six years of living out of state, I no longer feel very connected to Cincinnati, really only thinking of it through the experiences of my loved ones who are still there, along with the Facebook posts of high school classmates I haven’t spoken to in years.

Yet, despite my disconnect, I knew right away that Harambe had been killed, and knew right away how people felt about it: their pain and outrage, their unwillingness to let the death pass quietly. And in my scrolling I searched—hoped—for some post that would reflect what I was experiencing.

I didn’t find it. So, I realized, I’d have to write it myself.

At the moment, the general public is demonstrating more compassion toward a gorilla than toward Black people who were (are!) gunned down by police at an alarming rate in this country. Harambe is mourned more (com)passionately than the Black humans with whom gorillas have historically and degradingly been compared. Harambe’s death by shooting—an isolated, logical decision—is, apparently, less acceptable than the systemized, institutionally-protected and -reinforced deaths of Samuel DuBose and Paul Gaston by bullets, just the same. When Black people are killed by cops, whether in Cincinnati or anywhere else in the U.S.,  it is “what’s supposed to happen,” and so: no outrage. When a gorilla, due to a random, unforeseen event, is killed by zookeepers, hearts bleed. How can we be so misguidedly selective about the bodies we invest compassion in?

Luckily, compassion is a limitless resource. We don’t have to choose between loving people and loving non-human animals, between demanding some meaningful outcome of Harambe’s death and demanding a full renovation of our supposed justice system. The reason that more compassion is being shown toward Harambe than toward Black people—those named above and multitudinous others—is simply that while Americans are encouraged from infancy to love and honor animals, we are taught from that same early age, regardless of our race, that Black people are something less than human. Apparently, maybe something even less than animal.

In the portraits of Harambe that surface on my Timeline, I appreciate the majesty of his body, a body not so distantly related to any human, Black or otherwise—and a body that can never live again. Unlike compassion, living is not limitless; as humans, we have the unique ability and responsibility to shape the lives of the animals we have placed ourselves over, as well as the ability and responsibility to shape our institutions, norms and cultural assumptions. Our own violences. Should Harambe have been killed? Should the Cincinnati Zoo’s gorilla exhibit have had a secondary enclosure? Should the United States have had more fatal police shootings in the first 24 days of 2015 than England and Wales combined have had in the last 24 years? Should a young Black man be 21 times more likely to be one of those slain than a young White one?

All of these questions are ours as Americans, with a particular onus on White Americans. Compassion is an investible form of power, and can be, as we see with various campaigns around Harambe’s death, a tool of inquiry and an agent of social change. To whatever possible end, folks have chosen to invest in Harambe—and the more we practice investing, the more potent and capacious our collective compassion becomes.

In turn, compassion is never wasted, should never be discouraged. What should be questioned are the presumptive limits of American compassion, and how that compassion can be most critically and progressively invested. Harambe will rest in peace; how can we, in a nation that grows more tenaciously racist with each turned head?