Trump wants revenge: His hunger to be president is all about gaining power to settle petty personal scores

Trump's entire political career can be traced back to his personal grievances, making him a very real danger 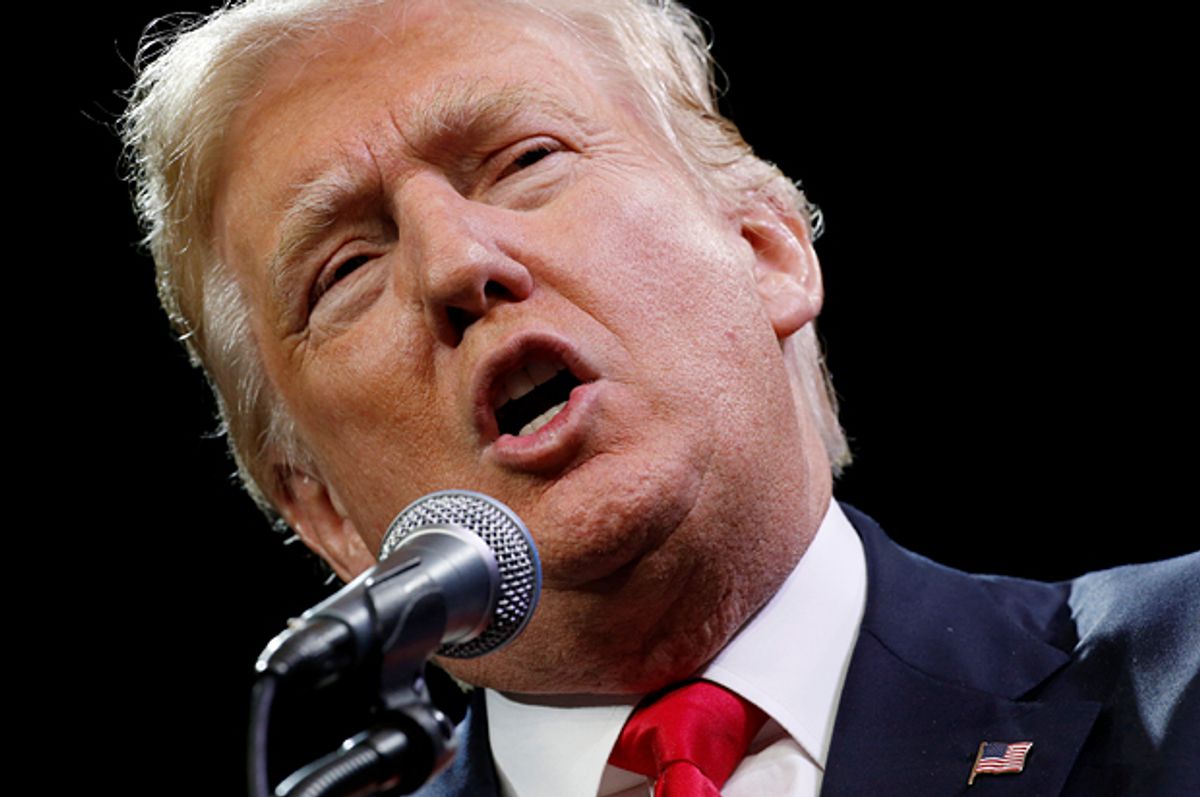 Increasingly, the evidence is pointing to a certain conclusion: Donald Trump is running for president because he believes the power and fame of the White House will allow him to settle the score in his ever-expanding list of petty grievances.

Sure, there are other things he likes about it, like the attention and the opportunity to slap the word "Trump" in gold lettering across the front of the desk in the Oval Office, are motivating factors. But for those who have been following the campaign closely, it's hard to ignore the fact that Trump spends much, perhaps most of his time, honing an enemies list of people he imagines have personally slighted him and fantasizing out loud about putting them and anyone he associates with them in their place.

Farah Stockman and Keith Bradsher of  The New York Times published a piece Monday detailing a major grudge that Trump holds against a group of Chinese investors that helped save him from a financial crisis in the '90s. He made a lucrative deal with this group of Hong Kong billionaires to sell them the Bank of America building on Avenue of the Americas, allowing him 30% of the profits and paying him feeds to develop the building. In 2005, they sold the building for $1.76 billion.

"Although it was believed to be the largest residential real estate transaction in the city’s history," Stockman and Bradsher write, "Mr. Trump was furious, and contends to this day that his partners did not consult him first."

Trump claims he was mad because he thinks he could have gotten a better deal, a claim that's even those completely ignorant of real estate economics can see is self-serving nonsense. Still, he sued the men who had saved him from financial ruin, making wild accusations and tying them up in court for years.

He lost the lawsuit, but now runs around telling audiences he won it, portraying the portion of the building he owns, which was what he settled for after his loss, as if he "got from China in a war."

He mentions this deal, pretending he won when he lost, during his many campaign tirades portraying China as some kind of economic predator that will stop at nothing to destroy the American economy, saying, "we are being ripped so badly by China" and that they are out to "rape our country" and that our trade deficit is "the greatest theft in the history of the world".

It's a bizarre obsession, but this New York Times story suggests that his paranoia could be the direct result of his personal vendetta against a group of Hong Kong billionaires that he sued because he wasn't asked to sit in on their sales meetings.

It may sound like a stretch to say that a man would attack an entire country of people because he felt like a handful of businessmen snubbed him, but this is hardly the first story that has come out linking Trump's bizarre political conspiracy theories to personal grudges he holds.

As Andres Oppenheimer of the Miami Herald reported in April, Trump has similar sour grapes about a business deal in Mexico:

The three-tower, 25-story luxury Trump Ocean Resort Baja Mexico condo-hotel project by the Trump Organization and the Irongate real estate company was originally announced in 2006. Two years later, the project ran into financial trouble, and Trump removed his name from it. By 2009, the project was effectively suspended, and angry investors sued.

Trump said that he had merely licensed his name to the project, and had not been involved in building it. In November 2013, after more than four years of litigation, Trump — who often says, “I never settle lawsuits” — settled one lawsuit by about 100 would-be condo buyers, The Los Angeles Times reported at the time.

It's not the only time that Trump has engaged in this unsavory practice of licensing his name to other developers to trick people into thinking they are investing with him instead of someone whose name they don't know. But what's interesting about this is that Trump's bitterness over having to settle this lawsuit seems to have spilled over into his opinions about Mexico itself, causing him to demonize the entire country and everyone who lives in it.

I have a lawsuit in Mexico’s corrupt court system that I won but so far can’t collect. Don’t do business with Mexico!

His bitterness is so out of control that he also lambasted Mexican director Alejandro Iñárritu for winning a best picture Oscar, whining on Fox News, "It was a great night for Mexico, as usual — this country, you know, the whole thing is ridiculous."

Heaven help us if he becomes president and they beat us at soccer. He might blow their entire country off the map, muttering bitterly about how it's not his fault that beachside property investors didn't read the fine print on the scam business deals he tricked them into.

This tendency to make everything about his own petty grievances was on display over the Memorial Day weekend, when he used 12 whole minutes of his speaking time during a San Diego rally to go on and on and on about a federal judge that ordered documents from an ongoing lawsuit over Trump University to be unsealed. As with Baja situation, Trump is being sued by people who feel defrauded because they trusted the Trump name and spent a lot of money without seeing any return for their investment.

The judge, Gonzalo Curiel, made the entirely reasonable argument that, as Trump is running for president, that means the public has a right to know more about his clearly shady business deals. Trump, in return, has been going on tirades about Curiel, accusing him of bias, and noting that he "happens to be, we believe, Mexican". (Curiel was born in the United States.) Clearly, Trump's tendency to act like any personal conflict can be laid at the blame of an entire nation is continuing apace, and probably growing stronger.

Even Trump's decision to run for the presidency appears to stem from a childish grievance. As the New York Times reported in March, President Obama made some digs at Trump during the 2011 White House Correspondents Dinner, and while Trump tried to pretend it didn't hurt his feelings, his ego was clearly bruised, because he might be the most thin-skinned human in history. Trump started escalating his political ambitions after that, spending special attention to flogging the idea that Obama is faking his American citizenship. When it became clear that the Republican party was going to take his checks but not take him seriously, Trump ran for president.

There's good reason to believe Trump has no interest in the actual work of governance, and not just because so many of his "business" dealings involve him licensing his name without actually bothering to invest time or money. Even Trump's top advisor, Paul Manafort, admits that Trump has no real interest in doing the actual job of being president, instead telling the Huffington Post that if Trump wins, he'll just hire someone else to do the job for him.

"He needs an experienced person to do the part of the job he doesn’t want to do," Manafort said, positing that the vice president could be the guy to do the actual work part of the job. "He seems himself more as the chairman of the board, than even the CEO, let alone the COO.”

So what does Trump want to be president for, if doing the actual job sounds so repulsive to him? This long history of nursing petty grudges offers an answer: It's a score-settling move, an attempt to show the "haters" — a group, which in his narcissistic mind, encompasses entire nations — that he's a big winner and that they are supposedly losers.

That's probably a big part of Trump's appeal to his supporters, who are marked mostly by having high levels of racial grievance, most of it as irrational and downright imaginary as Trump's.

But it's also a major reason to be very, very afraid of a Trump presidency. There can be no doubt that a man who is mostly drawn to the White House to settle petty grievances will abuse the power the presidency affords him to go after anyone he believes has laughed at or disrespected him. He has no sense of proportion and his ego is everything. It's not paranoid, looking at this history, to worry that he will topple the world economy to get back at some Chinese businessmen who didn't let him sit in on a meeting.