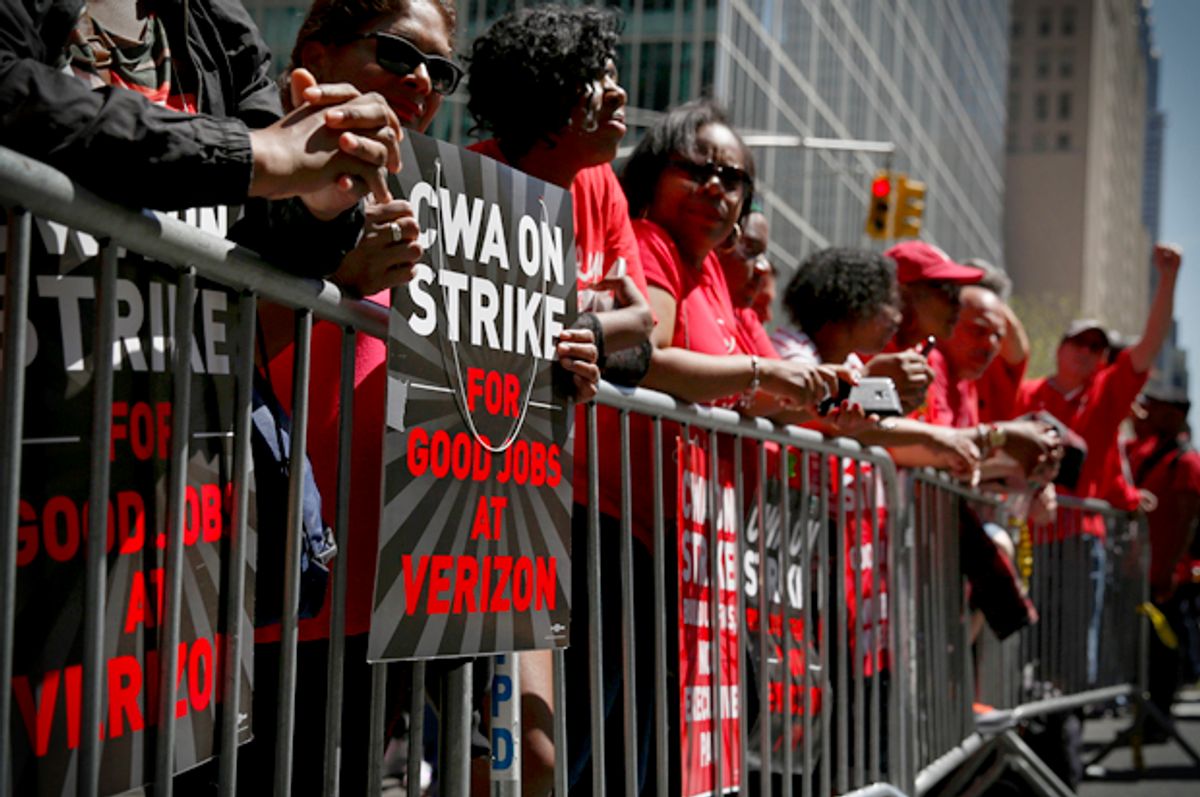 People demonstrate outside a Verizon store during a strike in New York, April 18, 2016. (Reuters/Shannon Stapleton)
--

Verizon workers will be heading back to work on Wednesday after a historic 45-day strike.

Nearly 40,000 Verizon workers went on strike on April 13, demanding that the telecommunications giant stop outsourcing unionized jobs, withdraw proposed cuts to benefits and provide all workers with a contract.

The two unions representing the company’s workers, the Communication Workers of America, or CWA, and the International Brotherhood of Electrical Workers, say some Verizon employees have worked without a contract since August.

After the largest strike in recent U.S. history, CWA announced on Friday, May 27 that it had won "big gains" in negotiations with Verizon.

"Striking CWA members have achieved our major goals of improving working families’ standard of living, creating good union jobs in our communities and achieving a first contract for wireless retail store workers," the union said in a statement.

On Monday, CWA released the details of the tentative agreement it reached with Verizon. The four-year deal addresses a variety of issues.

Overall, the new contract will increase the percentage of customer service work that is handled by unionized workers. This was one of the most important demands, given Verizon has roughly 40 percent fewer unionized U.S. workers now than it did a decade ago.

Under the deal, Verizon agreed to add 1,300 new call center jobs — 850 in the Mid-Atlantic region and 450 in the Northeast. It also will reverse some outsourcing initiatives and create new field technician jobs.

"The addition of new, middle-class jobs at Verizon is a huge win not just for striking workers, but for our communities and our country as a whole," said CWA President Chris Shelton in a statement. "The agreement in principle at Verizon is a victory for working families across the country and an affirmation of the power of working people."

"This proves that when we stand together we can raise up working families, improve our communities and protect the American middle class," Shelton added.

The tentative four-year agreement will also give workers a 10.9 percent raise with compounded interest, including 3 percent upon ratification, and 2.5 percent more on each anniversary of the contract.

In Brooklyn, New York and Everett, Mass., workers will get a $2,800 minimum in profit sharing, pension increases and a first contract. This will be the first contract these nearly 70 Verizon Wireless retail store workers have ever gotten.

Mike Tisei, a Verizon Wireless retail worker in Everett, expressed enthusiasm that he and his co-workers would have a union and a fair contract for the first time. "That means a better quality of life and meaningful economic security for our families," he said.

"Today is a great day for my family and working families along the East Coast, and it’s only possible because we stood together," Tisei added.

Verizon agreed to withdraw all proposed reductions of pensions. Over the next four years, there will be three 1 percent increases in defined benefit pensions, in fact.

Cuts in accident and disability benefits that Verizon had proposed were also withdrawn. Instead the unions and the company said they agreed to make unspecified changes to active and retiree health care plans.

Verizon said it will additionally end its performance supervisory program, QAR, in New York City, which workers said was extremely abusive. Instead, the unions and company are going to work with an outside consultant.

“Our children and our families have been depending on us to stand up for what’s right and what’s fair,” explained New York Verizon field technician Fitzgerald Boyce. “Striking wasn’t an easy decision for our families, but we knew that we had to fight to save good jobs and our way of life. We fought hard and we won.”

Bernie Sanders applauded the Verizon workers for their historic strike. "This strike has been emblematic of the growing gap between our largest corporations and front line workers when it comes to living standards and employment security," he said in a statement.

When the strike began in April, Sanders joined the workers on the picket line in Brooklyn. He stood up and gave an impromptu speech condemning Verizon, "one of the largest, most profitable corporations in this country," as "just another major American corporation trying to destroy the lives of working Americans" by outsourcing jobs and cutting health benefits.

Sen. Sanders has repeatedly criticized the mega-corporation for not avoiding paying federal income taxes and for giving its chief executive enormous compensation.

Verizon has used loopholes to pay an effective tax rate of 0 percent. And CEO Lowell McAdam reportedly will make $23.1 million in total compensation in 2016, a sizeable increase from $18.3 million in 2014.

“I was proud to stand with these workers before and during the strike, and even prouder of the thousands of volunteers from our campaign that joined demonstrations and picket lines for the last six weeks," Sanders said.

Sen. Sanders and CWA President Shelton both also thanked Labor Secretary Thomas Perez, who was involved in the negotiations.

CWA says it faced intimidation by the company throughout the strike. In early May, the union was contacted by workers in the Philippines who said they work for Verizon. In a trip to visit the workers, CWA alleges that it discovered undeclared offshore Verizon operations, and that its representatives were subsequently threatened by a heavily armed SWAT team.

Verizon strongly rejected the accusations, calling them "fictional," although CWA provided Salon with video and photos of a SWAT team that it says were taken were in the Philippines.

On April 14, the day after the strike began, CWA also claimed that two striking workers were hit by the luxury sports car of a Verizon attorney. The company denied this as well.