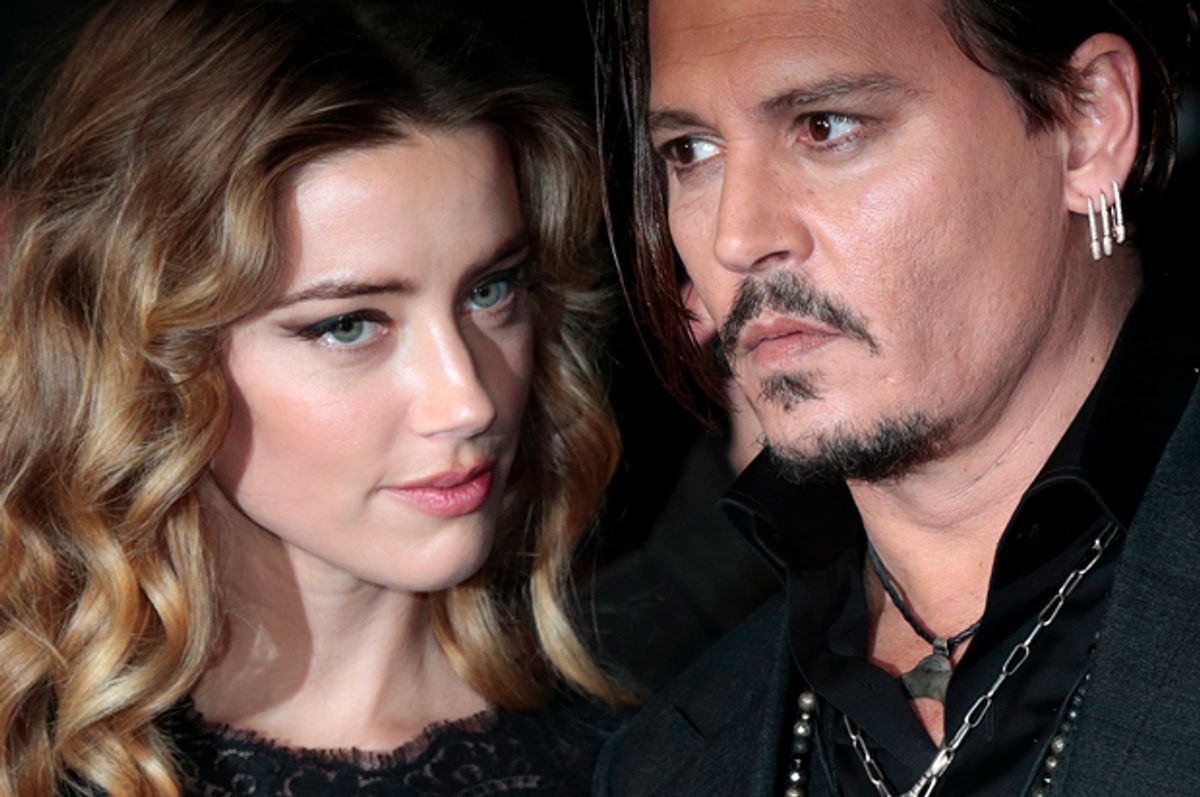 The armchair sleuths of the tabloid entertainment industry believe they have gotten to the bottom of why Johnny Depp allegedly abused Amber Heard: He had a problem with her being bisexual.

On Friday, news broke that Heard, who has appeared in films like “The Danish Girl” and “Pineapple Express,” was granted a restraining order from Depp, who she claims turned physically and emotionally abusive in the course of their 16-month long marriage. The two originally met on the set of “The Rum Diary” and were wed last February. Following the allegations, an image of Heard with a bruised and battered face went viral. Heard claims that the 52-year-old actor threw a cell phone at her and threw her to the ground.

The gossip website Hollywood Life alleges that jealousy over her former romantic attachments was the cause: The A-list actor was uncomfortable with his estranged wife’s “lesbian friends.” The site claims, “Amber’s bisexual past was reportedly a big problem.” If you didn’t catch the sneaky suggestion of infidelity, the National Enquirer is happy to clear it up any confusion: “Johnny was surrounded by women who kept him fretting about his bisexual bride's lesbian past!” According to the mag, the “other women” in question included photographer Tasya Van Ree, to whom Heard was formerly engaged, and model/actress Cara Delevingne.

If websites are using Amber Heard’s “bisexual/lesbian past” as clickbait, this overt victim-blaming only reinforces the very real intimate partner abuse that bisexual women often face. Bisexual and queer women are disproportionately likely to be the victim of domestic violence, and stories like these—which suggest that Heard’s sexuality was somehow to blame for her abuse—will only encourage survivors to stay silent.

In addition, bisexual women were nearly four times as likely to be raped as their straight or lesbian counterparts and nearly twice as likely to experience negative life outcomes in the aftermath, including experiencing PTSD or being forced to take time off of work to recover from the abuse.

Thus, it shouldn’t be surprising that women who don’t identify as either straight or as a lesbian experience an increased risk of mental health issues. According to a 2016 survey from Drexel University, bisexual women report “significantly higher scores on the depression, anxiety, and traumatic distress subscales than did heterosexual females.” Meanwhile, those rates were more or less equal for lesbians as they were for heterosexual women. The researchers note that these results are due to “unique stressors, such as stereotypes that bisexuals are promiscuous or that bisexuality is ‘just a phase.’”

The cult of misinformation bisexual women face is epitomized by the “lesbian until graduation” meme, which Autostraddle memorably describes as “the cultural archetype of a [usually white, privileged, overeducated] girl who ‘experiments’ with same-sex relationships in college either as part of a rebellion against her parents/hometown/former life as a high schooler with a curfew or as the result of a newfound feminist political consciousness that can only truly be manifested by touching another girl’s vagina.”

There are lots of ways, however, that bisexuals have their orientation invalidated and are explicitly told they don’t exist. During a memorable scene in HBO’s “Sex and the City,” Carrie Bradshaw describes male bisexuality as “just a layover on the way to gay town.” This suggests that if a man comes out as bisexual, he’s merely testing the waters before coming out as a full-blown Kinsey Six later.

If you’re wondering where bisexual people get these messages, it’s not just from TV shows. It’s everywhere. It’s in the New York Times. It’s even from other queer people, who are just as likely to perpetuate biphobia as straight people. Biphobia has often been called the LGBT community’s “dirty little secret.”

Let’s face facts: The myths cited above may be true for some people. Sometimes people toy around with labels and decide those labels are not right for them and they choose a different one. When Tom Daley originally announced that he was family in 2013, he maintained that he still “fancied” women—suggesting that he was bisexual. After falling in love with “Milk” screenwriter Dustin Lance Black (to whom he is now engaged), the Olympic swimmer clarified that he identifies as gay.

If he had a change of heart in that time, it’s an act of not deception. These things happen. The heart is a mysterious, unknowable organ, and we humans are often strangers to our own feelings.

The focus on these isolated cases, however, projects outlier phenomena onto the behavior of an entire community—who are then branded as fraudulent or liars. In a way, Amber Heard was then already set up to fail. By labeling herself as something that vast populations of Americans don’t believe is real, everything she does is seen as somehow suspect. Note that publications like Hollywood Life treat her “bisexual past” as something almost criminal, as if she were an ex-felon or something.

Peter Ford touched on this idea in an episode of The Morning Show, which airs on Channel 7 in Australia. “I probably shouldn’t say this, I’ll probably get in trouble, but it’s not wise to marry a bisexual,” Ford said. “This is what Johnny Depp has done here, with Amber Heard, and she was in a very legally committed relationship, a marriage, a legal marriage, to another woman when Johnny came along, and she decided to travel across to the other side.” (He since apologized.)

The branding of Amber Heard as a nefarious “fence-sitter” also neglects the fact that as AfterEllen’s Trish Bendix pointed out, Heard is still bisexual: Who a person is attached to doesn’t necessarily define their sexuality. In a 2014 interview with Larry King, former “True Blood” actress Anna Paquin (who is married to her one-time co-star Stephen Moyer) was asked if she’s a “non-practicing bisexual.” Paquin responded that she can be both bisexual and married to a man: “If you were to break up with them or if they were to die, it doesn't prevent your sexuality from existing. It doesn't really work like that.”

The barrage of victim-blaming and shaming Heard has been subjected to unfortunately shouldn’t be surprising, as Joanna Pepin told ThinkProgress. Pepin found that the media’s attempt to legitimize Depp’s actions by pointing the finger as Heard’s sexuality fits a larger pattern of excusing the behavior of alleged abusers.

According to Pepin, news reports that deal with allegations involving white male celebrities abusing their partners are 2.5 times more likely to include “victim-blaming statements.” These stories also routinely “[fail] to contextualize domestic violence as larger social problem and commonly portrayed domestic violence as a couple’s problem.” Media coverage also, as ThinkProgress’ Casey Quinlan notes, is more likely to suggest the presence of “mutual violence or [point] to drug addition and inebriation as mitigating circumstances.”

Blaming like women like Amber Heard for their own abuse will only keep others who have been subjected to similar violence from speaking up. Will they be believed? Will they dismissed because of who friends or ex-partners happen to be?

But in the case of the bisexual community, perpetuating dangerous stigma may serve to keep some folks from coming out at all. A 2015 poll from Pew Research found that just 28 percent of bisexuals are out to the “important people in their life,” as opposed to the 71 percent of lesbians and 77 percent of gay men who report the same. This is despite the fact that bisexual folks account for the largest population of individuals in the LGBT community.

Bisexuals are here. We’re queer. When will everyone else get used to it?