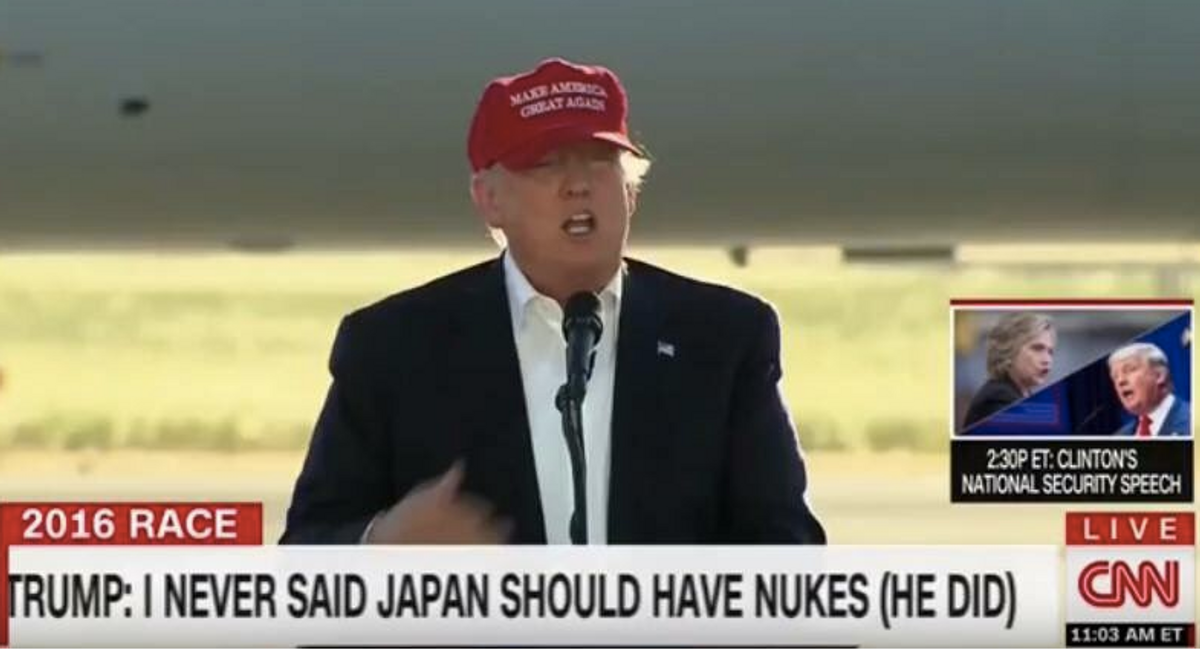 Donald Trump's presidential pivot has been as successful as his fraudulent, decades-long marketing scheme. But after months of serving as the convenient target of deflection every time the unlikely presumptive major party presidential candidate is called upon to illustrate any policy prescription, it appears as though the media may now be finally willing to aggressively fact-check Trump's myriad of lies.

Trump's latest lie, that he had never said Japan should develop nuclear weapons, was boldly called out by CNN in real time on Thursday. During the June 2 edition of CNN’s "At This Hour With Berman and Bolduan," correspondent Jason Carroll reported that Trump recently claimed that he never said he wants Japan to get nuclear weapons.

"[Clinton's speech] was such lies about my foreign policy, that they said I want Japan to get nuclear weapons. Give me a break," Trump complained during a campaign rally in Sacramento on Wednesday, claiming that the former secretary of state was lying when she warned against his qualifications to be commander-in-chief, citing his comments on a potential nuclear weapon for Japan.

But as CNN pointed out in real time, Trump, in fact, did say just that. As CNN aired footage of Trump's interview with Fox News' Chris Wallace, its on-screen chyron read: "TRUMP: I NEVER SAID JAPAN SHOULD HAVE NUKES (HE DID)":

The fact-check, which was first flagged by the New York Times' James Poniewozik, was roundly praised on Twitter.