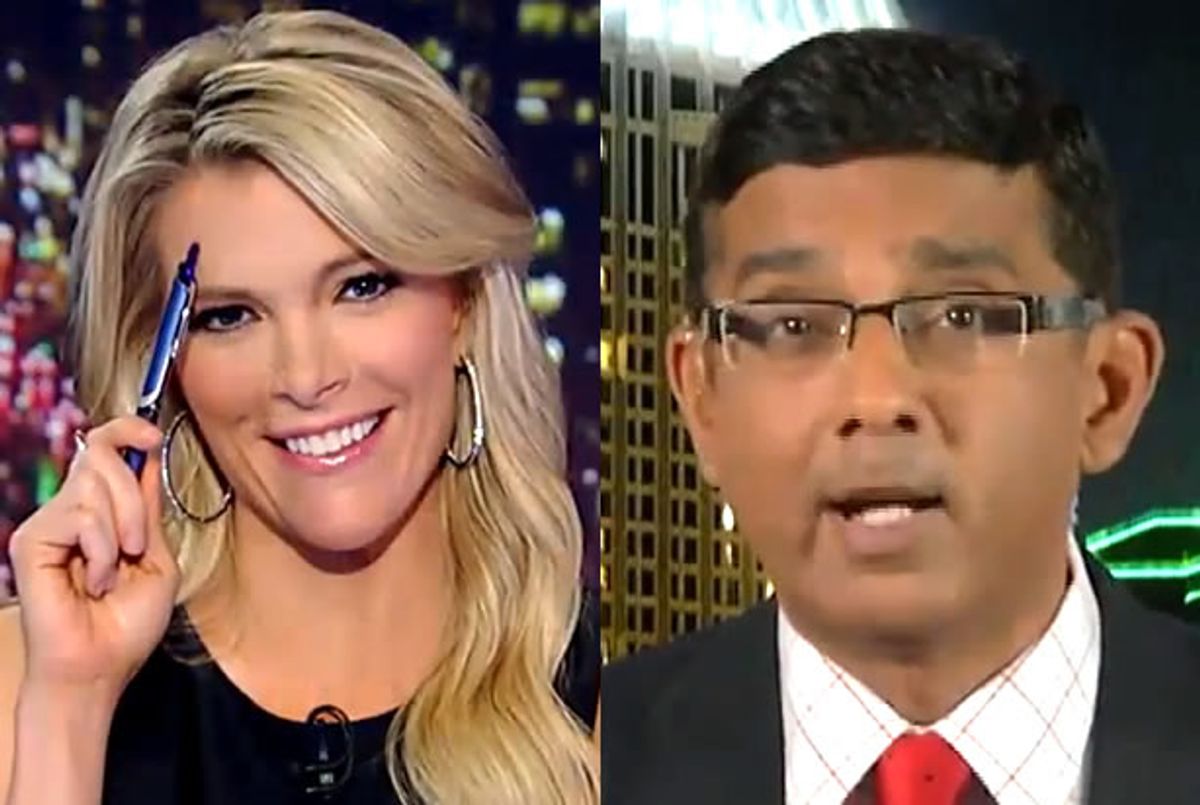 One of the perks of being associated with the modern conservative movement is that no matter how badly you fail, how thoroughly incompetent you are, or how wildly corrupt and disreputable you choose to be, you’ll never lack for friends, allies, or media availabilities. There’s no finer example of this phenomenon than Dinesh D’Souza, the former Reagan official, disgraced former college president, campaign finance fraudster, Twitter racist, fake Christmas tree pitchman, and terrible documentary filmmaker, who still enjoys the respect and attention of his allies within the movement despite having done everything in his power to destroy his reputation as an academic.

It was D’Souza the hack documentarian who appeared on Megyn Kelly’s Fox News program this week to promote his latest movie, “Hillary’s America.” The film is the successor to D’Souza’s 2012 documentary, “2016: Obama’s America,” which purported to lay out all the ways in which Barack Obama was intentionally destroying the country. According to D’Souza, Obama’s presidency has been motivated entirely by an anti-colonial vendetta the president inherited from his father. The movie (and the book that preceded it) was rank character assassination rooted in shoddy scholarship, factual errors, logical inconsistencies, and insane conspiracy theorism. But because it targeted the Democratic president, it was met with acclaim by the broader conservative movement.

The same cycle seems to be repeating itself with “Hillary’s America.” The trailer for the film is hilariously overwrought, with D’Souza portraying his 2014 felony conviction for campaign finance fraud – he admitted to the crime and pleaded guilty – as an attempt by the Obama administration to silence him. This allegedly harrowing experience (he was sentenced to probation) apparently opened D’Souza’s eyes to the criminality that runs rampant through the Democratic Party, and inspired him to “go behind the curtain” and discover the “soul” of the Democratic Party. And, as D’Souza explained on Fox News, the TRUTH he discovered is that the Democrats are The Real Racists:

D’SOUZA: I think it’s very important for people to know that historically the Democratic Party has been the party of slavery, of segregation, of Jim Crow, of lynching, of the Ku Klux Klan, forced sterilization, support for fascism, the internment of the Japanese after World War II – I mean, it’s an unbelievably sordid history, and it’s been somehow all been swept under the rug. It’s all been covered up. And the blame has now switched to the very party, the Republicans, who fought to end slavery, who opposed segregation, who proposed anti-lynching laws throughout the 20th century. So there’s an unbelievable inversion that’s gone on, and our film blows the lid on it.

No one actually denies or covers up the fact that the Democratic Party has a shitty history of either outright racism or passive tolerance of racism as a means of maintaining political power. But parties change, and right around the time that Lyndon Johnson broke ranks with the Solid South and passed landmark civil right legislation, the pro-segregation, pro-Jim Crow types D’Souza references rapidly switched their allegiance to the GOP. Since then the Republicans have been the party of the Southern Strategy, Lee Atwater, “Hands,” “calves the size of cantaloupes,” minority disenfranchisement, and racial backlash against the first black president. What D’Souza seems to be doing is crafting a theory of racial politics that purposefully ignores the last half-century of partisan realignment and the modern GOP’s focus on white identity politics (culminating in the nomination of an explicitly nativist and unguarded racist of the presidential candidate).

This thesis got a sympathetic reception from extremely serious and credible journalist Megyn Kelly, who had this to say in response to D’Souza’s tendentious rambling: “In today’s America, where Republicans don’t tend to support affirmative action and don’t want certain civil rights laws to be extended, that’s what the other side uses to tar them with the racist accusation, among other things.”

It would have been nice had Kelly asked D’Souza to explain how his musings about the first black president being a “boy” from “the ghetto” fit in with his Actually, The Democrats Are The Racists theory, but sadly she only had enough time to congratulate him for his recent marriage.