Donald Trump is not the victim: The right's laughable spin as violence breaks out in San Jose

Fox News and other conservative outlets would have you believe that Trump supporters are under assault. Not true 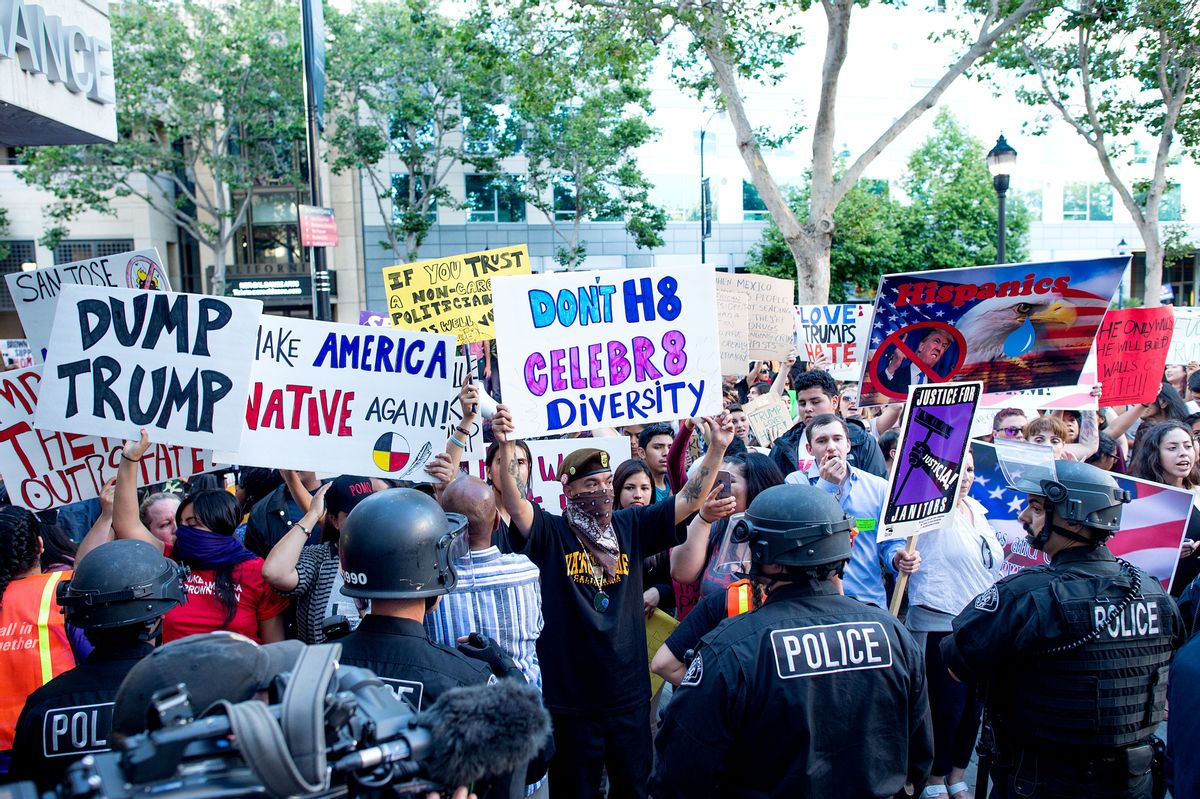 Violence and protests are features of Donald Trump’s 2016 Republican presidential primary campaign. His rally in San Jose, California, on Thursday did not deviate from this script.

As reported by the Associated Press, protesters clashed with Donald Trump supporters outside of the San Jose Convention Center. Eggs were thrown at several of Trump’s foot soldiers by protesters. There were also reports of physical altercations between the two camps.

Right-wing websites such as Fox News, Breitbart and others are sounding cries of alarm and panic over the San Jose protests. Such shrill voices will only become louder and more hysterical as Donald Trump’s campaign continues through to the Republican convention and then the presidential election in November

This is all very predictable. The increasing levels of violence and protests at Donald Trump’s rallies fit perfectly with Right-wing delusions about how “real America” is under “siege” by people of color, non-white immigrants, “liberals,” “Muslims,” gays and lesbians, as well as young people—the latter being a group who have supposedly been stolen away and brainwashed by the bogeyman of “political correctness.”

These worries and panics are not new. A sense of white victimhood and paranoia has been a feature of movement conservatism (and the broader American right-wing) since at least the 1950s.

However, what is especially problematic, and perhaps even novel in a moment when Donald Trump, a reality TV show carnival barker professional wrestler wannabe and proto-fascist has taken control of one of the United States’ two ruling political parties, is how the corporate news media has largely enabled his ascendance.

The Fourth Estate—which is supposed to serve as a watchdog and guardian for democracy and liberty—has given Trump at least two billion dollars of free advertising. At almost every key juncture, the corporate news media has failed to expose Donald Trump as a fraud, a bigot, an incompetent, and leader of a racist, xenophobic, nativist, anti-intellectual political movement. It was not surprising that Fox News and the other parts of the right-wing “news” echo chamber and disinformation machine would enable the rise of the American Il Duce. But, by normalizing his campaign and behavior, the so-called “liberal” news media also played a central role in Donald Trump’s ability to become the presumptive 2016 Republican presidential nomination

The corporate news media has also failed to properly contextualize cause and effect in its discussions of the protests at Donald Trump’s campaign events. For example, the sporadic violence at Thursday’s San Jose rally is a response to the threats (both overt and implied) of physical and other harm made by Donald Trump and his supporters against undocumented Hispanic immigrants, black Americans, other people of color and Muslims.

Ultimately, regardless of how the right-wing “news” media will distort it, Donald Trump’s rally in San Jose is not Selma, Alabama in 1965. Trump is not Dr. Martin Luther King Jr.; he is more like George Wallace. Trump’s supporters are racists and bigots; they are not the honorable freedom fighters who were beaten, bloodied, and killed during the long Black Freedom Struggle and civil rights movement.

In a functioning democracy, political violence should almost always be condemned. However, we must not forget that Donald Trump and his supporters are on the wrong side of history.

Trump is a political arsonist. He and his supporters have no moral high ground upon which to stand as they complain about being burned by the fires that they themselves have set in San Jose and elsewhere.

Thrown eggs are not bullets. Despite what Fox News and the right-wing media will suggest in the days and weeks to come, Donald Trump and his supporters are neither victims nor martyrs. They are bullies who delight in taunting the weak and the vulnerable. And like almost all bullies they summon up crocodile tears of victimhood and pain when someone is brave enough to confront them.