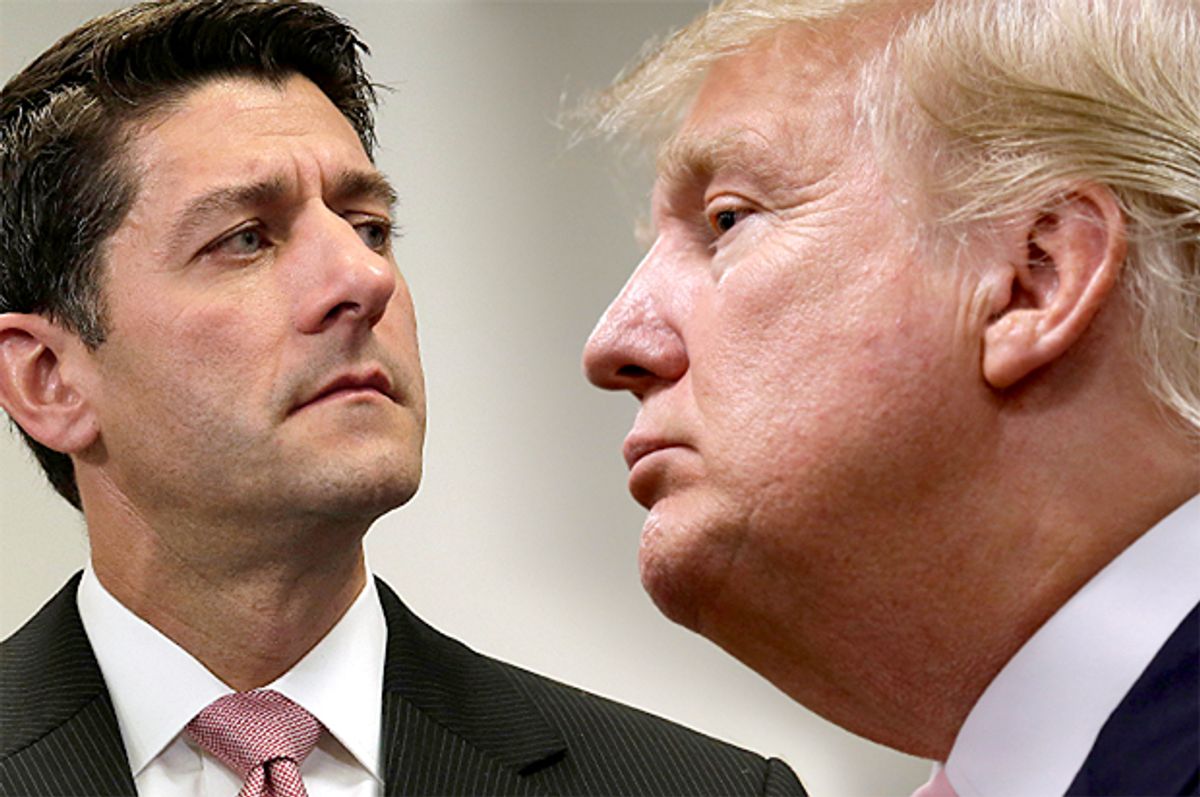 Donald Trump's takeover of the Republican Party is complete.

Paul Ryan is the highest-ranking Republican official in the country. He's considered by many to be the leading light of the party, the great hope for 2020. Some of this attention is deserved, some of it isn't. For all his faults, Ryan is – or was – a serious person. There's much to disagree with in his agenda, but he's elevated himself above the nihilists and reactionaries who've dominated the GOP in recent years.

Ryan has wisely remained neutral on the Trump question. The contortions were awkward, but he managed to avoid surrendering to a man he knows represents the party's undoing.

The Republican speaker of the house penned a column for his hometown paper in which he officially endorsed Donald Trump for president. The piece is full of ambiguous language and half-hearted affirmations, but make no mistake: It's an endorsement of Trump. Ryan writes:

“This month, we'll show the country what a better tax code looks like. We'll outline a plan not just for repealing Obamacare but replacing it with a better system, more focused on patients, choices and lower costs. We'll offer a plan to restore the Constitution and the separation of powers that decades of executive overreach have eroded. We'll present the ideal national security and foreign policy to keep Americans safe. We'll show how we can reform rules and regulations so they're spurring the economy and creating better jobs, not destroying them. And we'll offer a better way to help lift people out of poverty and into lives of self-determination. It will be a positive, optimistic vision for a more confident America.”

That passage is stuffed with shopworn platitudes we've heard from conservatives for at least 30 years. It may be optimistic, but it isn't new – or visionary. The point, though, was for Ryan to lay the groundwork the endorsement that was to follow. He stresses that's it's all about the “ideas,” and that Hillary Clinton “represents all that our agenda aims to fix.”

Ryan wants to frame this as an endorsement not so much of Trump but of the House policy agenda he's cooked up to save the country from liberal ruination. “I feel confident,” Ryan writes, “he [Trump] would help us turn the ideas in this agenda into laws to help improve people's lives. That's why I'll be voting for him this fall.”

This is a shrewd – if transparent – tactic. But it won't work. You cannot endorse Trump without owning what he stands for. The fact is, Ryan has endorsed an unrepentant bigot for president of the United States. He's supporting a man who has, among other things, mocked a disabled reporter, threatened to silence the free press, vowed to commit war crimes, and proposed banning all Muslims from entering the country. This is a man who, just yesterday, claimed a U.S. District Judge had “an absolute conflict” in presiding over the Trump University case because he's “of Mexican heritage.” “I'm building a wall,” Trump said. “It's an inherent conflict of interest.”

To say Trump lacks the dignity to be president is putting it lightly. That he's inched this close to the office is already an eternal stain on our process. And Ryan would have us believe that because Trump made the appropriate noises in a series of private conversations, we should overlook who he is and what he represents? What a sad, pathetic plea.

With this endorsement, Ryan has abandoned any pretense of seriousness. He's now part of the problem. This was an opportunity for him to take a principled stand, to demonstrate that Trump needn't define the Republican Party. He failed. If he's the bright light of the GOP, the party is what it appears to be: a lost cause.