The Clintons' arrogance might be their undoing: Hillary has a serious image problem — and blood-thirsty Republicans aren't to blame

For the Clintons, politics is a family business, which on its face is about accumulating wealth and gaining power 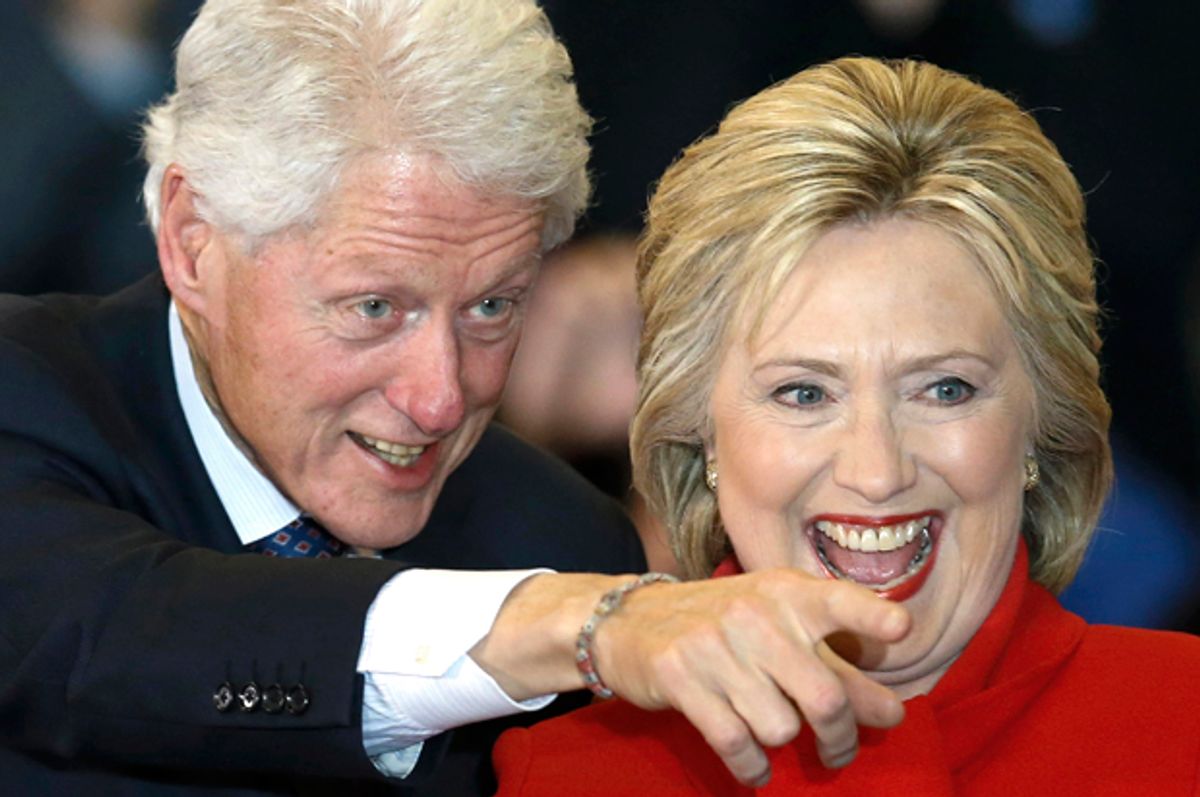 Donald Trump is not a man who needs any kind of assistance when it comes to coining insulting epithets or finding effective lines of attack on his political opponents. He has a vulgar, shameless, and sophomoric style that seems better suited for professional wrestling than presidential politics, and resembles a troll who gets off on provoking people, all to satisfy his desperate craving for attention. This unorthodox and brazen approach is unpredictable, and it could prove to be very potent against a conventional politician like Hillary Clinton, who has plenty of political and personal baggage for Trump to work with (which -- it should be noted -- her current opponent has refused to exploit).

Trump’s nickname for Clinton, “Crooked Hillary,” gets to the heart of what so many Americans find disconcerting about the former Secretary of State and her husband. The opportunism, the sleazy connections (e.g. Frank Giustra, Sant Chatwal, Marc Rich, etc.), the millions in paid speeches from Wall Street firms and foreign companies, the endless catalog of scandals (the majority — but not all — of which are baseless), the big campaign contributions from bankers and billionaires and media moguls, and so on. Clinton has a serious image problem: people view her as the ultimate politician who will lie and cheat her way into power (there’s a reason why people believe Frank and Claire Underwood were inspired by the Clintons).

Of course, a great deal of this is obviously a result of right-wing smears and conspiracy theories that have been propagated since the first day the Clinton’s entered the political spotlight. Anyone who denies that a right-wing noise machine has been making shit up about the Clinton’s and manufacturing scandals since the 1990s is simply deluding themselves. But the same goes for anyone who argues that the Clinton’s are merely victims of a “vast right-wing conspiracy” who have never done anything questionable or ethically dubious in their entire careers — like the folks at Blue Nation Review, a website that was purchased by a Hillary Super PAC run by David Brock in December and has since become a propaganda wing for the Clinton campaign.

Once you dig through the right-wing garbage heap — e.g. Vince Foster, Whitewater, Benghazi — there is still ample reason to distrust Hillary Clinton. On a purely political level, it’s hard to take anything Clinton says during a campaign as genuine; she has altered her positions time and again for political benefit, and there is no reason to think this will change. For most Bernie Sanders supporters, this seems to be the major turnoff. Compared to Sanders, who has remained committed to progressive principles throughout his career, Clinton is a political chameleon.

But even if you ignore the political opportunism and inconsistency, there are very real ethical concerns that must be considered. And it goes way beyond Clinton getting big contributions from Wall Street executives or billionaires to fund her campaigns (after all, she is not unique in this respect: most D.C. politicians are equally dependent on wealthy donors in the current system).

For the Clintons, politics is a family business, and it seems to be as much about accumulating wealth as it is garnering power. Hillary has often questioned why she has received so much flak for something like paid speeches — which many other former public officials give as well (read: former public officials) — but there is quite simply no power couple even remotely comparable to the Clintons and the political/business/philanthropic apparatus that they have created over the past twenty years. And if the Clinton’s were Republicans, there is no doubt that partisan Democrats would be more than a little suspicious.

A large share of Bill Clinton’s post-presidency speaking gigs were for special interests that benefited greatly from his administrations policies (e.g. Wall Street and deregulation), or special interests that stood to benefit from Hillary’s current or future political power. Consider one disquieting fact: out of the 13 speeches that Bill Clinton has been paid over $500,000 for during his speaking career, eleven of them came a decade after he left office, while Hillary was secretary of ctate — and all of these were sponsored by foreign companies, NGO’s, or governments. Hillary has obviously earned big paydays for speeches as well, once again from interests who stand to benefit from being on the good side of a future president, like Goldman Sachs. Finally, the Clinton Foundation itself  has received millions in donations from individuals, corporations, and governments that have had something to gain — whether Canada’s mining billionaire Frank Giustra or the oil corporation Chevron or the autocratic regime of Saudi Arabia, which donated some 10 million to the Foundation and then saw a boost in arms sales approved by Clinton’s State Department.

None of this is proof of corruption, of course; but it does raise real concerns, and it certainly reveals an arrogance on the part of the Clintons. After being accused of plotting the murder a political adviser and friend who committed suicide (Vince Foster), did Hillary and Bill really think that giving speeches to Goldman Sachs or cozying up to a billionaire like Frank Giustra would go unnoticed? Perhaps Clinton expected her Republican opponent to be even more tainted by big money than herself (like Jeb Bush or Scott Walker)? If this is the case, Donald Trump is the worst opponent Clinton could have hoped for.

On Friday, after taking well-deserved heat for bringing up the Vince Foster conspiracy theory (which is probably the craziest of them all), Trump said that he may just stick to some of Bernie Sanders’ criticisms of Clinton, because the media says his own are “not nice” (of course, it’s not that his talking points are mean, it’s that they’re batshit crazy). “He’s given me a lot of my best lines. I mean, he has given me such great lines on her,” said the billionaire on Sanders. If this is Donald’s strategy — to stick to the substantive criticisms and refrain from conspiracy theories and personal attacks — team Clinton should be worried.

Of course, Clintonites will undoubtedly blame Sanders for putting things into Donald’s head if he continues to climb in the polls and starts asking Clinton to release her Goldman Sachs speeches; but the only people who deserve blame are Hillary and Bill. As Sanders recently said in an interview with The Young Turk’s Cenk Uygur: “Many of my supporters think I have not been hard enough on [Clinton]...And believe me, Trump will be coming from a very different direction. They have 50 people doing opposition research, and everybody knows what's out there. So to say that we have been too hard — scorched earth — is totally absurd.”

The Clinton empire, an audacious fusion of politics, business, and philanthropy, has always presented a risk when it comes to presidential politics — and with the current populist ethos in the air, it has become increasingly hazardous. While I suspect Clinton will ultimately defeat Trump — his inflammatory rhetoric and buffoonish ignorance is too repellent, and it’s her election to lose  — after 2016, voters may not be as forgiving.