"A champion of civil rights": Reaction to the death of Muhammad Ali

An outpouring of grief and honor from politicians, leaders and celebrities for Muhammed Ali 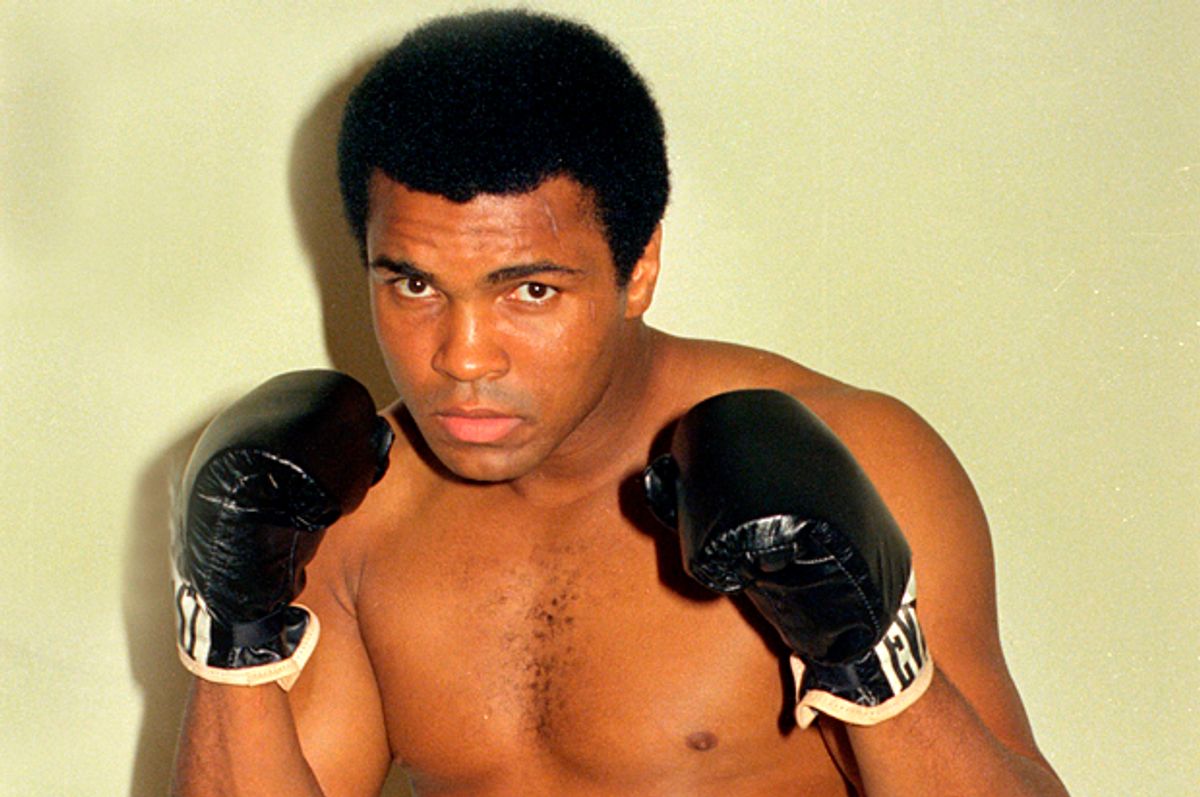 Quotes from around the world after the death of three-time heavyweight champion Muhammad Ali:

"The true GOAT. What a sad day for everyone to (lose) someone so great and kind and someone who really stood up for what they believed in. He was my hero. He always will be. #muhammadali #cassiusclay" - tennis great Serena Williams on Instagram.

"I gave Ali the Presidential Medal of Freedom in 2005 and wondered aloud how he stayed so pretty throughout so many fights. It probably had to do with his beautiful soul. He was a fierce fighter and he's a man of peace, just like Odessa and Cassius Clay, Sr., believed their son could be." - former President George W. Bush.

"Muhammad Ali, a man who stood by his principles despite criticism and hardship, exemplified a true patriot and a true Muslim. His strength, courage and love of humanity has been, and will continue to be, an inspiration to people of all faiths and backgrounds in America and worldwide." - Roula Allouch, chairwoman of the Council on American-Islamic Relations' national board.

"Mr. Ali was far more than a legendary boxer; he was a world champion for equality and peace. With an incomparable combination of principle, charm, wit and grace, he fought for a better world and used his platform to help lift up humanity." - spokesman for U.N. Secretary-General Ban Ki-moon.

"The world has lost a great Champion. Muhammad Ali, lover of human beings, a warrior for the fight against discrimination ... a great friend." - tweet by football great Jim Brown.

"Ali, the G-O-A-T. A giant, an inspiration, a man of peace, a warrior for the cure. Thank you." - tweet by actor Michael J. Fox, who has Parkinson's disease.

"This is a sad day for me - and for the world. Muhammad Ali was bigger than sports and larger than life. He said he was 'The Greatest' and he was right. He was the greatest of his era in the ring and a global icon in sports. I was a kid during his prime, but I remember some of his epic fights and his incredible style. My sincerest condolences go out to his wife, Lonnie, his kids and family." - Basketball great Michael Jordan.

"The sporting universe has just suffered a big loss. Muhammad Ali was my friend, my idol, my hero. We spent many moments together and always kept a good connection throughout the years. The sadness is overwhelming. I wish him peace with God. And I send love and strength to his family." - Soccer great Pele on Twitter and Instagram.

"Muhammad Ali, who passed away yesterday, was an extraordinary athlete and a remarkable man of good deeds who conquered the hearts of millions. Boxing legend Muhammad Ali's life-long struggle against racism and discrimination will never be forgotten. May Allah have mercy on Muhammad Ali, whose courage, conviction and determination inspired all of humanity. - tweet from Turkish President Recep Tayyip Erdogan.

"Today we bow our heads at the loss of a man who did so much for America. Tomorrow, we will raise our heads again remembering that his bravery, his outspokenness, and his sacrifice for the sake of his community and country lives on in the best part of each of us." - Basketball great Kareem Abdul-Jabbar.

"The best of all time has left. I remember the emotion of my dad when he saw him face to face in Las Vegas, in the fight between Sugar Ray Leonard and Tommy Herns in 1981. So how can I not feel this loss, if he was what he most admired my father? In the ring he was a dancer. Surely he left because he could no longer give us more happiness. My condolences to his family." - Soccer great Diego Maradona on Facebook.

"His life story is an American story, and it's a story that began in Louisville, Kentucky." - U.S. Senate Majority Leader Mitch McConnell, R-Ky.

"He fought hard, not only in the ring, but in life for his fellow citizens and civil rights. The world has lost today a great unifying champion whose punches transcended borders and nations." - King Abdullah II of Jordan.

"Ali was not afraid of anything. He made up his own rules inside the ring and out, and he told the world that is how he acted even (if) they didn't like it. ... He was suspended for political reasons, he was arrested, he lost, he once boxed 12 rounds with a broken jaw, but he always came back. We learned from him that victory is the ability to stay on your feet after everyone else has raised their hands and given up." - Yair Lapid, head of Israel's centrist Yesh Atid party and a former amateur boxer.

"Muhammad Ali has not only been a sports legend but also an outstanding man, whose values transcend his fantastic boxing career. We will always remember him also for his full commitment for the values of equity and brotherhood. We're proud he started his unique sports career winning the Olympic gold medal in Rome 1960, a story that still emotions me very much. He'll be forever 'The Greatest' to all of us." - Rome 2024 bid President Luca di Montezemolo.

"Muhammad Ali transcended sports with his outsized personality and dedication to civil rights and social justice. He was an inspirational presence at several major NBA events and was deeply admired by so many throughout the league. While we are deeply saddened by his loss, Muhammad Ali's legacy lives on in every athlete who takes a stand for what he or she believes." - NBA Commissioner Adam Silver.

"HBO is honored to have known Muhammad Ali as a fighter of beauty and a man of principle. We experienced the joy of working with him in support of initiatives he passionately cared about including, most importantly, his never-ending desire to teach tolerance and understanding of others to all people." - HBO Sports.

"He sacrificed the heart of his career and money and glory for his religious beliefs about a war he thought unnecessary and unjust. His memory and legacy lingers on until eternity. He scarified, the nation benefited. He was a champion in the ring, but, more than that, a hero beyond the ring. When champions win, people carry them off the field on their shoulders. When heroes win, people ride on their shoulders. We rode on Muhammad Ali's shoulders." - the Rev. Jesse Jackson, founder and president of the Rainbow PUSH Coalition, and longtime friend of Ali.

"Rip the greatest of all times in many different ways" - tweet by world heavyweight champion Tyson Fury.

"Muhammad Ali was not just a champion in the ring - he was a champion of civil rights, and a role model for so many people." - tweet by British Prime Minister David Cameron.

"Hillary and I are saddened by the passing of Muhammad Ali. From the day he claimed the Olympic gold medal in 1960, boxing fans across the world knew they were seeing a blend of beauty and grace, speed and strength that may never be matched again. We watched him grow from the brash self-confidence of youth and success into a manhood full of religious and political convictions that led him to make tough choices and live with the consequences. Along the way we saw him courageous in the ring, inspiring to the young, compassionate to those in need, and strong and good-humored in bearing the burden of his own health challenges. I was honored to award him the Presidential Citizens Medal at the White House, to watch him light the Olympic flame, and to forge a friendship with a man who, through triumph and trials, became even greater than his legend. Our hearts go out to Lonnie, his children, and his entire family." - former President Bill Clinton.

"We are proud to call Ali not only a member of Team USA, but an Olympic champion. With unparalleled grit and determination, he left a legacy that will continue to inspire generations of Americans for years to come." - Scott Blackmun, CEO of the U.S. Olympic Committee.

"He's the most transforming figure of my time, certainly. He did more to change race relations and the views of people than even Martin Luther King. It was a privilege and an honor for me to know him and associate with him." - Bob Arum, who promoted 26 of Ali's fights.

"Ali, Frazier & Foreman we were 1 guy. A part of me slipped away, "The greatest piece" - tweet by George Foreman, Ali's opponent in the "Rumble in the Jungle"

"Muhammad Ali is a legend and one of the world's most celebrated athletes, the fighter who ushered in the golden era of boxing and put the sport on the map. He paved the way for professional fighters, including myself, elevating boxing to become a sport watched in millions of households around the world" - boxer Oscar De La Hoya, who won titles at six different weight classes.

"We lost a giant today. Boxing benefited from Muhammad Ali's talents but not nearly as much as mankind benefited from his humanity. Our hearts and prayers go out to the Ali family. May God bless them." - boxer Manny Pacquiao, a champion in eight weight classes.

"Passing the Olympic torch to Muhammad to light the cauldron at the Atlanta Games in 1996 was the defining moment of my career, and a memory I will treasure forever, as much as any of the medals I won. As Olympians, our role is to inspire others to achieve their dreams, and no person has ever lived that role more than Muhammad Ali." - swimmer Janet Evans.

"Without question his legacy is one that he defied the odds because he stood up for what he believed in and when he was put to the test he took personal harm rather than go against his beliefs and what he stood for." - Don King, promoter of "Rumble in the Jungle" and "Thrilla in Manilla."