Donald Trump is a chicken-hawk and a hypocrite: The real story about Vietnam and the draft

Trump claims to love veterans now. Maybe because he was happy to let someone else fight in his place 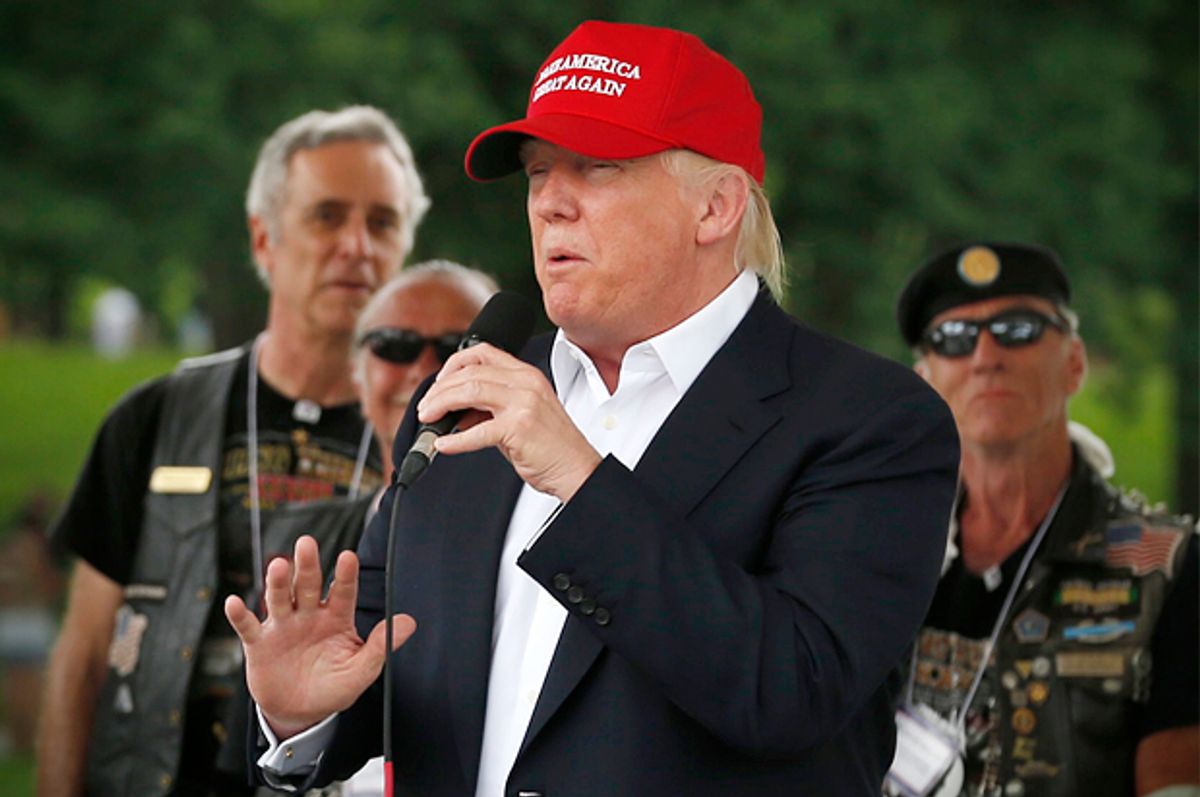 In an article published last year  in the New York Daily News, Wayne Barrett, a biographer of Donald Trump, is quoted as saying that Trump’s evasion of the draft “fit a pattern of avoidance than was commonplace in his generation.” I saw that referenced in a piece this week on Media Matters by Eric Boehlert, one criticizing the coverage of Trump’s lack of military service against the background of scalding press depictions of Bill Clinton and even of Al Gore and John Kerry, both of whom served in Vietnam.

(I)n the Rolling Thunder rally coverage, there was little press attention paid to the fact that Trump himself actively avoided the draft during the Vietnam War, which seemed relevant considering he was speaking to so many Vietnam vets at an event dedicated to honoring America’s prisoners of war and military members who are missing in action. Typically the campaign press lingers over issues of awkward optics like that. But not for Trump and Rolling Thunder.

While writing “the blunt-spoken Mr. Trump” “likes to stress his desire to strengthen the military and improve how veterans are treated,” The New York Times made no reference to Trump’s Vietnam avoidance.

The "pattern" that Barrett refers to is a bit more complicated than he lets on. For one thing, it was only "commonplace" among those of certain economic classes. The working class and the poor had no clue, for the most part, about how to go about getting the 1-Y classification that Trump was given. Among those trying to avoid the draft, it was gold-star status, but it was only one of many ways of getting out of serving—all of which were options for the rich, not the poor.

So I wish you well, Sarge, give ’em Hell!
Kill me a thousand or so
And if you ever get a war without blood and gore
I’ll be the first to go.

Not many who were evading the draft were doing so out of conscience. Maybe they threw a word or two in that direction, but their primary concern was themselves. As Trump’s was, and Clinton’s.

Most of us boys, on graduation from high school in the 1960s and turning 18, registered for the draft and were, fairly soon, classified 1-A—or prime cannon fodder. Each draft board was given a number it had to meet from those in the 1-A category. That meant each deferment shifted the burden onto a smaller group of potential draftees. Each time a Trump or Clinton got out, in other words, another had to go.

The same was true for those who went to Canada. It wasn’t entirely a victimless crime: Someone had to go into the Army instead.

Those who applied for—and received—2-S deferments while they were students were expected to return to 1-A status on graduation. Few took this obligation seriously; few were as honorable as Al Gore, who went directly into the Army on graduation. Most college graduates—an even more privileged group then than they are now—scrambled to find another way out, Dick Cheney in the lead.

Personally, I got lucky. I turned 18 in 1969, which put me in the second year of a draft lottery meant to tighten up exemptions and increase the fairness of the process. Though I was a student, I never applied for 2-S status. So the lottery was a big deal for me. I was lucky; my 249 was higher than called over the next year so I was not faced with the choice between prison and the army that other young men I knew had to make.

I don’t blame people for moving to Canada when they had the resources. I know plenty who did, who stayed away until President Carter allowed them back. I don’t even blame Clinton and Trump and Cheney and W. and Jeb and all the others for finding ways around serving in Vietnam. I doubt they even thought much about the fact that, when they didn’t go, someone else did—or that someone might be dying in their place.

The rich and/or the privileged have always had the option of staying away from war—and most of them take it up, no matter the time or the country. Some don’t—and these need to be appreciated as real heroes, whether we agree with them politically or not (the attacks on Kerry were shameful). Some take it, but make clear their disapproval of the conflict, as Clinton did, leaving them in a somewhat morally ambiguous position—certainly not one to be proud of but also not particularly shameful. There are others—and these are the ones Ochs lampoons in his song—who cheer on the soldiers while scrambling to avoid joining them. By letting others go to die when they will not risk their own lives for the cause, they are among the lowest of the low.

Joining them at the bottom are the politicians who, without serving, pander to the image of those who did, associating with them for their own advancement. Trump, today, is abusing veterans a second time--and in just this way. First, he let them go where he would not. Second, after years of ignoring them, he suddenly claims to be acting on their behalf.

Given his past and knowledge of the situation at the time, I would think any veteran would be leery of supporting him.