That crazy story Trump peddled about how there's no California drought? You can trace it to an InfoWars conspiracy 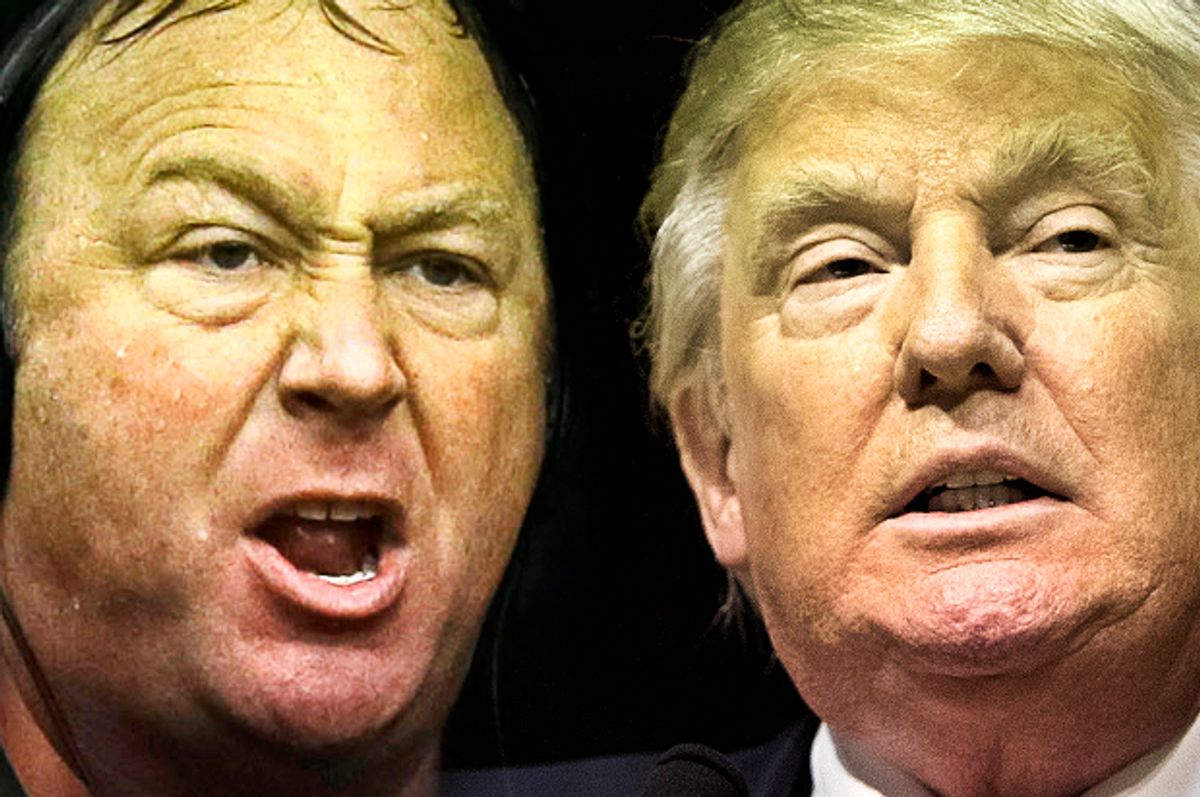 Donald Trump keeps on upping the ante. Consider what he said at a rally last week in Fresno, on the subject of California’s apocalyptic drought.

Make that “drought,” for according to Donald J. Trump, there isn’t one. Never mind that the years between late 2001 and 2014 have been the driest in California history since record-keeping began; nor the 12 million trees that have died from “drought” in Southern California; nor predictions that the 2015 El Nino would bring relief, though the amount of rainfall actually decreased.

In Fresno, Donald approached the podium. He led off with a customary boast. (“What a crowd . . . I saw on television this morning, five o’clock in the morning, people were lining up. This is crazy, crazy!”) He referred to some real estate transaction he was working “probably 10 or 12 years ago” in their fair city: “They had a problem. You remember the problem, right? They had a problem, I think it was Running Horse, and I was going to take it over and do a beautiful job.” Then, in mid-thought, he pivoted incoherently into the subject on everyone’s minds in that parched agricultural region: “Fortunately, I didn’t do it, because there isn’t any water, because they send all the water out to the ocean, right?”

“I made a fortune by not doing it,” he said. The crowd cheered. Only in Trumplandia do the citizens cheer when they’re not afforded the benefactions of their orange-haired overlord. (I looked it up. His proposal to take over the foundering Running Horse golf course development apparently fell apart because the city refused his demand to dispossess homeowners over a nine-square-mile area through eminent domain.)

He commented that it was too bad he didn’t go through with the deal. Because: “I would have changed the water. . . . You have a water problem that is so insane, that is so ridiculous. Where they’re taking the water and shoving it out to sea.” Loud cheers.

He continued. “It’s not the drought. They have plenty of water. No, they shove it out to sea. Now, why? Because they’re trying to protect a certain kind of three-inch fish.”

“If I win, believe me, we’re going to start opening up the water so that you can have your farmers survive.” Then he moved on.

It made the news: “Donald Trump Tells Californians There Is No Drought.”

Then, however, reporters moved on to the next story, with no time to Google from whence Trump derived this crackpot notion about water taken from farmers and “shoved out to the sea.” The answer, apparently: InfoWars, the website of lunatic conspiracy theorist Alex Jones. Who believes, for instance, that the school shooting in Sandy Hook, Connecticut, was staged by the government, using actors, in order to force gun control down the American people’s throats.

The theory that California’s water shortage is all the fault of the Environmental Protection Agency is, like most conspiracy theories, grounded in an actual fact. The EPA has, in fact, caused 800,000 acre-feet of water annually to be flushed into San Francisco Bay to maintain its marine ecosystem. The program, however, dates to the early 1990s, and California’s water system, all told, manages over 40 million acre-feet a year. The practice that Trump describes so darkly involves 2 percent of that—and an economically vital 2 percent at that. California fisheries produce jobs in the hundreds of thousands. But not in Fresno.

The notion that rules governing 800,000 acre-feet of water are the cause of the much larger problem, and that business about the “three-inch fish,” dates—word for word—to an April, 2015, InfoWars article entitled “Environmentalists Caused California Drought to Protect This Fish.”

Since last year, Rachel Maddow has been on the case of Donald Trump’s deep ties to Alex Jones. On the morning of December 2, she wrote in a syndicated column, Jones hosted Trump for anextended live interview. “After about 30 minutes of mutual compliments, and Jones telling Trump that ‘about 90 percent’ of his listeners support him, the presidential candidate wrapped things up by telling Jones: ‘Your reputation is amazing.’”

Maddow continued, “That same day, after that interview, 14 people were killed and 21 others were injured in the mass shooting in San Bernardino, Calif. Within hours of that news breaking, Jones and his website—predictably—were hosting discussions of how San Bernardino, like Newtown, like the Boston Marathon bombing, and of course like 9/11, was a hoax. Either it didn’t happen, or if it did it was perpetuated by the government.”

In mid-March, Jones took up the cudgels for Trump in a rant that began: “Everyone’s having their water poisoned, everyone’s having deadly vaccines pushed on them, everyone is having weaponized television aimed at them. . . . It is a metric, scientific, mathematic algorithm of tyranny, that is extremely sophisticated, that can even predict the future.”

“A few thousand people are in on the whole deal. And through compartmentalization, they’re rolling it out.”

Jones explained that shooting “all two million police in the country” in the back of the head wouldn’t help, because “there would just be anarchy and all sorts of problems and they would just bring in foreign troops.”

“The globalists are building a world, in their own words, where normal human life is over. . . . It’s the devil. And the churches are not going to tell you. It’s an alien force, not of this world, attacking humanity, like the Bible and every other ancient text says.”

He screamed at the top of his lungs: “IT’S NOT HUMAN INTELLIGENCE WE’RE FACING! . . . WE’RE UNDER ATTACK! EVERYONE’S UNDER ATTACK!”

And even shooting two million cops could not beat them back.

He proposed, however, something that could. “The elite hate Trump, let me tell you. And if he is a psy-op, let me tell you, he’s the most sophisticated one I ever saw. And even if he is, he’s a revelation of the awakening . . . Humanity’s gotta get off-world, we’ve got to get access to the life-extension technologies . . . I want the advanced life extension! I want to go to space! I want to see inter-dimensional travel! I WANT WHAT GOD PROMISED US! AND I’M NOT GOING TO SIT HERE AND LET SATAN STEAL IT!

Donald Trump appreciates this man’s amazing reputation, has appeared on his program, and is leveraging InfoWar’s insights to feed his symbiosis with his mob. The bigfoot political press missed that story, and will likely continue to miss it, because their entire business model and worldview is predicated upon the idea of two equivalent sides fighting for national power.

That’s not what our nation’s founders promised us. And I’m not going to sit here and let the orange-haired monster steal it.

This article was first published by the Washington Spectator