The GOP's women problem: Report shows the party of Trump is struggling to elect women to Congress

If Republicans can't appeal to demographics beyond white men, they won't survive as a national party 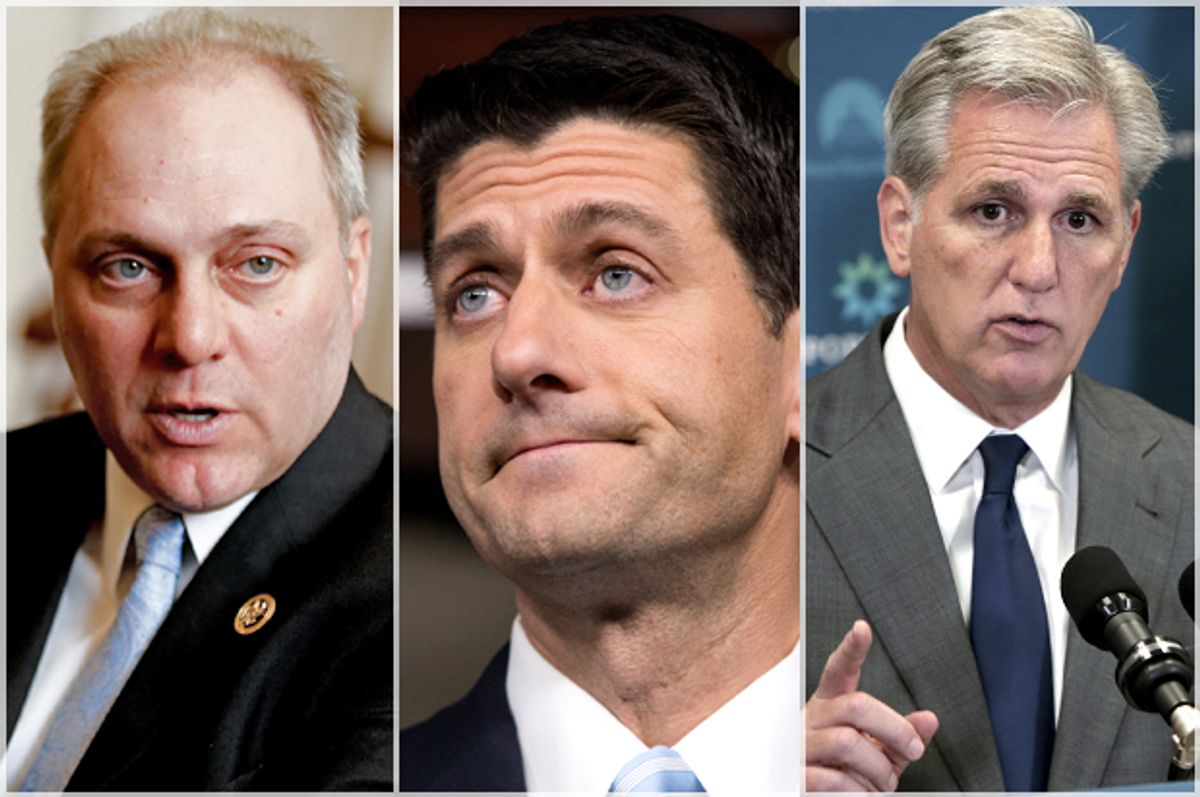 “The only card she has is the woman's card; she's got nothing else going. And frankly, if Hillary Clinton were a man, I don't think she'd get 5 percent of the vote... And the beautiful thing is, women don't like her.” -- Donald Trump

An unapologetic misogynist has hijacked the Republican Party. Donald Trump is unlikely to win a general election, but he's immensely popular among Republican primary voters. And he's managed to preserve his popularity despite insulting women repeatedly. Attributing a reporter's question to her menstrual cycle is the most egregious offense, but there are countless others.

Women have noticed, too.

Although Trump is viewed negatively by men in general, his favorability ratings remain high among Republican men. 61 percent of Republican men view him favorably, with only 36 percent reporting negative feelings. Republican women are more split on Trump (49 percent favorable, 46 percent unfavorable), which is instructive but not very conclusive. Unsurprisingly, Democratic voters – both men and women – are united in their disdain for Trump (84 percent of men and 89 percent of women view him unfavorably).

It's tempting to think of Trump as an outlier, as some foreign pathogen infecting the Republican Party. But that's not the case. His chauvinism finds a happy audience among conservatives. The more offensive and crass he is, the more appealing Republican men find him. This is a party that has worked hard to alienate women. Pushing intrusive and unconstitutional anti-abortion laws, threatening to defund Planned Parenthood, resisting equal pay measures – it's a mystery Republicans retain any women voters at all.

Against the backdrop of the Gallup numbers, a New York Times report by Derek Willis about the GOP's women problem in Congress is both alarming and predictable. Willis writes:

“Although women in both parties have increased their numbers in Congress during the past 25 years, the share of Democratic women – now nearly 33 percent – has continued to climb, while the Republican female share has leveled off since hitting 10 percent during the mid-2000s. And political polarization seems to be a major reason.”

Attributing the gender disparity to “political polarization” is a charitable interpretation. Sure, polarization is causally significant, but the question is what's causing the polarization? In this case, it's the increasingly strident right-wing ideology that pervades the GOP. As Republicans have surrendered more and more to talk radio extremists, they've become culturally regressive and anti-women. Even fiscally conservative women tend to be more aligned with liberals on social positions, and there's no place in the GOP for them. As Willis notes, “Moderate Republican women – think of Olympia Snowe, the former Maine senator, or Connie Morella, the former Maryland congresswoman – were once common in the party... But moderate Republicans of both genders are nearly gone from Congress today.”

Trump's chest-beating ethno-nationalism is a natural fit in today's aggressive, male-dominated Republican Party. But he's a symptom of their women problem, not the cause. The gender gap in Congress reflects a broader shift in conservative politics. If Republicans don't figure out a way to appeal to demographics beyond white men, they won't survive as a nationally competitive party. At the very least, they have to win with women, and that's hard to do when you're socially illiberal and a raging misogynist is the face of your party.