We need a new way to talk about guns: Blame, rage and UCLA

Tragedies polarize us in predictable ways. Here is how we unfreeze the conversation around violence and guns 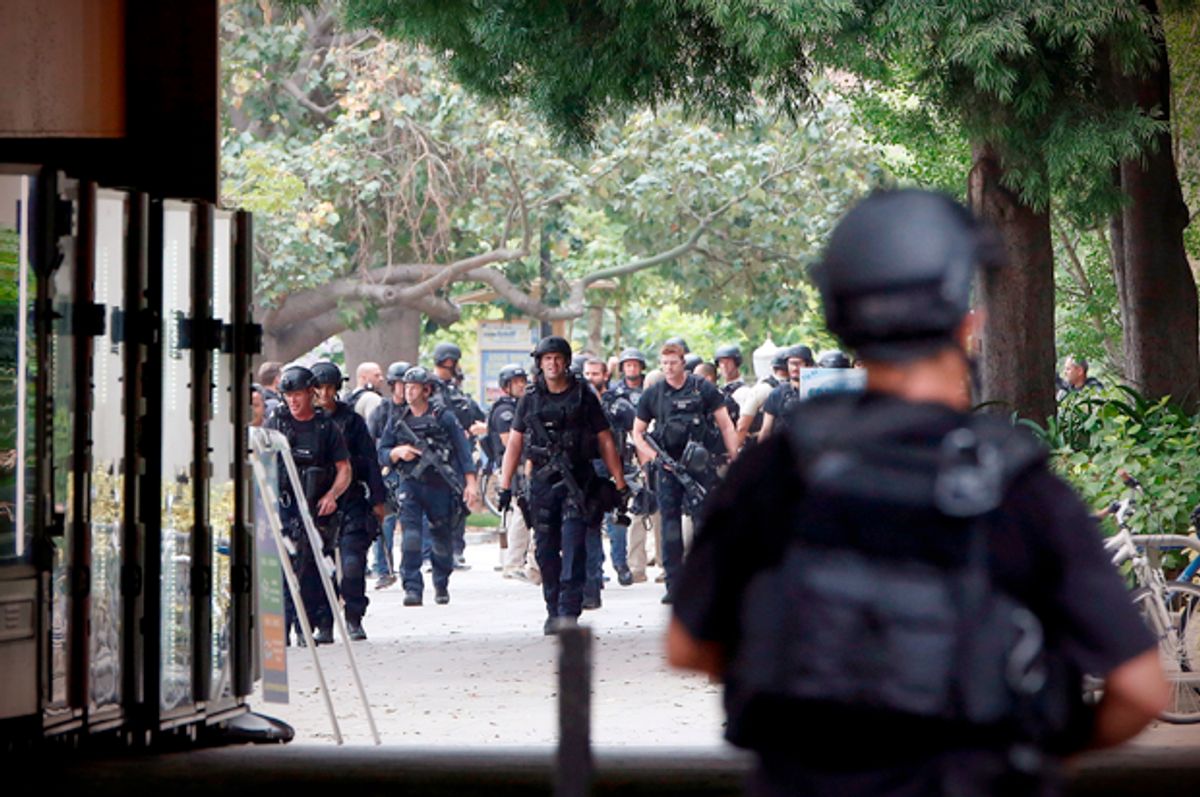 Add UCLA to the list. We have become so accustomed to these stories, the students on campus took immediate precautions to prevent more killing by removing their belts to tie the doors and barricade themselves inside classrooms when they heard shots fired. We turn on the T.V. or browse the computer and stop at a story of another young man, disenfranchised and alienated, overwhelmed by a sense of inadequacy, with access to deadly weapons, exacting his revenge on innocent victims who represent to him the many people who rejected him. His rage is recorded for all to see and we are riveted to the story. His object, often cloaked in religious themes, is to vindicate. He wants more than to be heard; he wants others to feel what he feels. His actions break our hearts. He leaves us weeping and looking for answers. Our grief and vulnerability give way to anger and we search for the cause and the solution to this epidemic, hoping to avert the next such disaster.

The reality is that our rhetorical cries of “Why?” are inauthentic—they are actually an attempt to shamefully accuse others of being fundamentally different and provide us comfortable psychological distance. A deeper look at the answer can be both illuminating and frighteningly simple. As often happens with tragedies, the events seem to polarize us rather than bring us together. In order to minimize our pain and feelings of helplessness, we respond in ways that actually encourage more violence. We need to evolve the dialogue further, past the outdated rhetoric that often shackles our ability to approach solutions.

From my experience as a therapist for adolescents and young adults struggling with mental health issues, there are two basic principles that lie at the core of solving such problems. First, we need to understand the person and why they would act out in this way. Second, we need to look in the mirror and acknowledge our individual and collective failures that contributed to their pain. We need to embrace dialectical ideas, understanding that seemingly opposite concepts can both be true: the offenders are responsible for their actions and we have some answerability for their pain and the conditions that make such tragedies so probable.

To begin to conceptualize the problem of violence, we need to explore the etiology of such behavior and this venture asks us to acknowledge our own propensities for violence, rage and revenge. This is a heroic task because we are allowing ourselves to see the similarities between ourselves and our villains. We want to see them as different, evil, and “out there” in order to distance ourselves from them. But, if we have the courage and allow ourselves to be acquainted with our own darkness, we can better understand the darkness of others (Gandhi). We will easily be reminded of the times when we covered our hurt, embarrassment or powerlessness with an act of rage. While the fantasy of a violent act is not the same as the act itself, our awareness of the relief that comes from such a solution gives us insight into the minds of those who take it a step further. If this pattern is not true for us, why then are we drawn so strongly to movies and stories where just such a plot unfolds? No great leader of a peace movement kept himself entirely separate from those who acted out the violent acts which they opposed—each was able to identify with the perpetrators and create an empathic, humble connection.

Moral deficits in people are best understood in terms of child development. Moral deficits are evidence that the individual experienced a dearth of empathic resonance. Experiencing empathy as a child creates a capacity for empathy in subsequent development. The way to teach right and wrong is to teach children how to feel. When people learn to feel their feelings, they see it and respond to it in others. When he was 5, my son Jacob displayed this kind of wisdom. While watching Disney’s "Peter Pan," after a scene where Captain Hook was railing against Peter and the lost boys and plotting his revenge, Jake plaintively offered to me, “Captain Hook is not bad, Dad. He is just sad. Right?” We must discover the wisdom of a 5-year-old and learn to see and respond to the scared child and not react to the scary mask that protects them. Dr. Martin Luther King explained that “a riot is the language of the unheard.” If we follow his logic and lead, we understand that listening is the most powerful way to prevent violence.

So if the intervention must be such a personal one, is there anything we can do as a larger society to change the discussion and move toward a solution? I believe we need inspired education and leadership on these subjects, rather than the self-righteous rhetoric we often hear and imagine to be helpful. We can foster a sensibility to learn to see the wounds that lie underneath these acts of violence.

Whether it is from a post on social media, an activist, or a politician, we often hear hatred, anger and rage directed at the perpetrators of violence. While this reaction is natural and protects us from our feelings of powerlessness and grief, it is not the response that will engender change.  The same sensibility that causes a problem, in this case fear and rage, cannot be employed to solve that problem. All the great flag bearers for peace in human history have taught us this principle. Dr. King expressed it this way: “Darkness cannot drive out darkness; only light can do that. Hate cannot drive out hate; only love can do that.”

Yet, because we feel vulnerable and because we were taught that the way to eradicate “evil” is to hate it, we rail against it with disdain instead of compassion. We must have the courage to respond to darkness and fear with love and compassion. During a discussion at a recent holiday gathering, one of my relatives commented on some of the recent terrorist activities by suggesting, “They are pure evil! They are evidence that people are possessed!” This kind of thinking must go the way of other outdated ideas the same way medicine has progressed from bloodletting to antibiotics. The notion of demonic possession was the idea of the 18th century and it is time for us to move into the 21st century’s understanding of the human psyche. An example of such progress in our thinking is the movement away from the war on drugs, treating addicts like criminals, to a treatment model where addicts are being seen as patients.

We need to understand the behavioral reinforcing effects of media coverage on those watching images and stories of the last shooter, the last bomber, and the last terrorist. We watch hours of hostile coverage in the media, both social and mass media, whenever there is an act of violence, terrorism or war. Under the banner of morality and goodness, the reactor rails against the act and the actor of the violence. While one can grieve these acts of violence, the eradication of such will only come through an educated and enlightened response. The actors of violence have no other tools at their disposal to communicate their psychological wounds—thus, they lash out at others so others feel as they do: powerless, afraid and small. We do feel those things in the wake of the tragedies they perpetrate, but we must not act as they do. We must learn to respond with greater wisdom than previous generations. Perhaps the greatest difficulty in a compassionate response is that it asks us to feel our pain rather than anesthetize it beneath the numbing effects of hate.

After we accomplish the difficult and courageous task of understanding the mind of someone who could commit such acts, we may have the capacity to see our contribution, individually and collectively, to their pain. As a parent, a society, or a country, we can take on the responsibility of our failures without being crushed by the weight of their choices. Each of the acts we lament in the news can be a commentary on all of us. We often fail to look in the one place where we can make a difference: the mirror. We are afraid to remove the responsibility from the one who pulled the trigger—and we want to keep the problem and the solution at arm's length. It is easier that way.

“Camus argued that in order for a society to legitimately execute someone, the society has to be innocent of the crimes that person commits. But this, as he knew, is ultimately not true of any society” (Gill, 2014). In some important sense the guilt belongs to everyone.  And so it is with each of us.” When we come to regard our contribution at every level to the problem of violence, it is then and only then that we will take a step closer to the solution.

When will we as a society evolve in our thinking enough to move away from simple blame and shame and allow for more complex answers? Parent education and expanded education regarding mental health issues are necessary. Gun laws need reworking. School systems and the mental health care systems need our attention. Video games, movies, television, social media and explicit music all beg for our thoughtful consideration. We haven’t done enough to change the dialogue around all of these issues. Typically, no one variable is sufficient to create a violent individual. But when a child is vulnerable, due to a lack of empathic resonance, the above circumstances conspire to create the perfect storm. The issue of violence is an emotional and spiritual problem, and its solution can’t be found in enacting new laws and reforming the social system. Rather, new laws will be the evidence of a cultural and spiritual awakening.

Thankfully, the numbers of victims at UCLA didn’t reach the totals of other school shootings; yet to the loved ones of the victims it was their whole world. We owe it to them to move the conversation of intersection of mental health, gun laws and our cultural ideas of violence forward.

Brad Reedy is the co-founder and clinical director of Evoke Therapy Programs and author of "The Journey of the Heroic Parent: Your Child’s Struggle and the Road Home"