His big con: Donald Trump’s campaign is a real-life version of "The Sting" 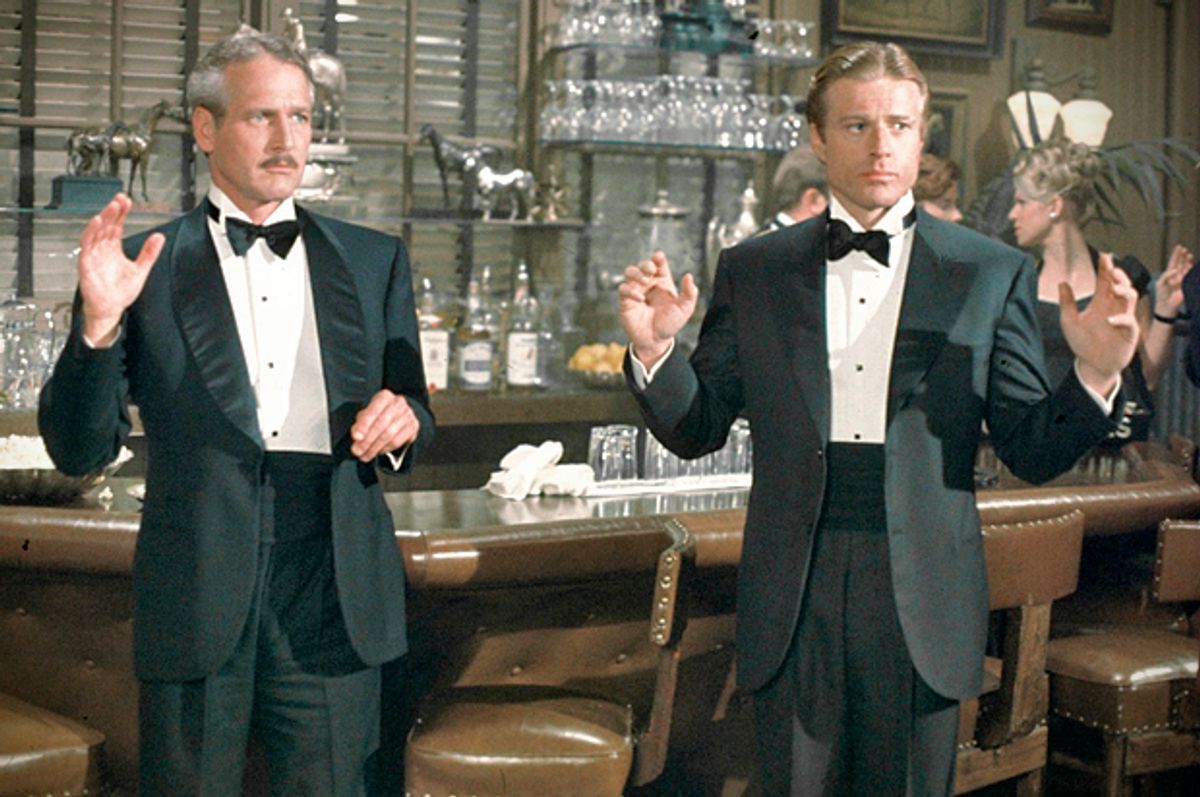 Paul Newman and Robert Redford in "The Sting" (Universal Pictures)
--

In the classic 1973 movie ‘The Sting," Paul Newman and Robert Redford are con men who pull off an elaborate hoax – “the big con.”

Donald Trump must have seen this movie and picked up a few pointers because it sure seems like he's attempting to pull off something similar.

As the movie shows, at the heart of a con lies a deception. In the movie, the victim of the con, the "mark," was a mob boss, and Newman and Redford assured the mark they had a secret connection in horse races, which gave them a sure way to pick the winners. They told the mark that if he bet on their tips, he was certain to win.

So the mark attends Newman’s betting parlor to test it out for himself, first on a small scale, and if it worked, he would make a bet to strike it big. The mark places his bet at the betting parlor following the tip, and sits down at a table to await the race. The betting parlor is quite nice with big-boards on the walls displaying the status of various races and loud speaker broadcasting live coverage.

The bell rings and the horses are off. The announcer relays the action as the horses gallop around the track. This one is in the lead, now that one overtakes. And here they come approaching the finish line, it’s going to be close, they’re neck-and-neck, and, the winner is… the horse that was predicted in the tip! It worked.

Pretty impressive. It appears to the mark that Newman and Redford must certainly have an inside connection. It must be a sure thing. The mark witnessed it for himself, in person.

But there was just one little wrinkle. The entire betting parlor was fake. The whole thing, completely fake. The big-boards showing the races, the clerk at the window, the other customers placing bets, the waitresses serving cocktails – all fake. The betting parlor did not receive or place any real bets at all. And the announcer over the loudspeaker? It was just a guy in a back room reading a script as if it were happening live. But it wasn’t. It was all fake.

And that’s the essence of a con – deception. The marks have no idea that they are being deceived, and all the while the con-men are leading their marks to draw a certain conclusion.

This is exactly what Donald Trump is doing.

Trump’s little ruse is to play upon his vast wealth. At his very first public event when he announced his candidacy for president, he brandished with great fanfare a paper statement of his finances, then with a stroke of dramatic fashion, he read how much he is worth: $8.7 billion.

Who has ever heard of such a thing? A candidate proclaiming their net worth in their announcement for president?

That was just the beginning. Trump is constantly reinforcing how rich he is. He conducts television interviews from his gleaming penthouse apartment. He flies to campaign stops in his massive private jet. Sometimes he even stages his campaign events right on the tarmac so that his jet is prominently featured in the background. He tells us over and over again of the various luxury properties he owns.

Why does he do all of this? Is he so painfully insecure that he must constantly remind everyone that he’s rich? Maybe. Is he a psychopath who is narcissistically obsessed with himself? Probably. Does he pathetically fancy himself as having Paul Newman's good looks? Obviously.

But something else is going on here. As Trump’s campaign has unfolded, it has become evident that his enormous wealth is at the center of his appeal. This is the single most substantive reason he has offered for voting for him. Sure, there are the appeals he makes to racism and paranoia, but these are not sufficient on their own, as other candidates who were racist and hawkish have withered. The center of Trump’s identity, persona and campaign is that he's filthy rich.

Remarkably, Trump has not even needed to declare his policy positions. He has offered very little in terms of substance. When he has provided a hint of substance his proposals have been so off the wall that they are utterly preposterous. And it doesn’t much matter what position he takes anyway because he is constantly contradicting himself.

Shockingly, Trump proclaims that he does not wish to disclose everything he'd do as president because he prefers to remain unpredictable. Seriously? Unpredictable? This is absurd. The whole point of having an election is so voters can elect the candidate who best reflects the policies that the voters prefer. Otherwise, there's no point of having an election at all. Imagine if all the candidates declined to disclose their policies to remain unpredictable. Voters would have no basis for choosing among the candidates. We might as well just pick a random name out of a hat!

How in the world could Trump get away with this? Why in the world would anyone still vote for Trump? Simple. Because he is rich.

By flaunting his wealth, Trump attempts to create the impression that he would be a great president. This is like a cheap magician’s trick — using a colorful object or a quick movement to divert attention from the sleight of hand. Trump flashes his riches as proof he is qualified to be commander-in-chief and to divert attention away from his sleight of hand that he has no substance. He does not need to articulate any policy proposals, he simply reminds us that he is rich. His wealth proves that he is superior to everyone else.

Like in ‘The Sting,’ this is all a grand deception. In reality, it is pure nonsense. If Trump truly were so smart and superior, then he would tell us, right now about his brilliant ideas and we would be amazed. But instead, Trump conceals the substance, emphasizes the flash, and proclaims that he as the great magician will make everything great. A scam.

The deception operates on two levels. First, just because Trump is rich doesn't mean that he made his money by being smart, superior, great, or anything of the sort. In fact, history teaches us just the opposite. Many fortunes were made by ruthless ogres who enriched themselves by exploiting others. Just think of the robber barons of yore. And even today think of the many wealthy kingpins who are despicable tyrants. Would we elect Rupert Murdoch as president? He’s a multi-billionaire. How about Sheldon Adelson? Maybe one of the Koch brothers? How about Martin Shkreli?

So let’s not be fooled.

How did Trump make his money? He did not invent anything new or special, and he certainly did not do anything to benefit ordinary people. In fact, it seems like he really did not do much of anything.

Trump was born into wealth and privilege, he went into his father’s already established real estate business, and then built luxury properties that served the super rich. By pure dumb luck, he just so happened to enter the luxury real estate market in the late 1970s when drastic income inequality was about to skyrocket.  It was the vast market increase that made Trump fabulously wealthy, not anything special he contributed himself.

Trump’s deception operates on a second level as well. Even if Trump were some sort of a genius in business, which seems highly unlikely, this does not mean that he would be a good president of the nation. The skill-sets are very different. Being a successful businessperson simply calls for maximizing your own profits, often at the expense of others — your competitors. Being a good president, on the other hand, requires understanding the perspectives of many differing groups and crafting solutions that work for all of these varied interests at once. Trump has never exhibited a hint of possessing any ability to empathize with others.

So the entire notion that Trump would make a good president because he is wealthy is the grand deception. And the central element of his appeal as a candidate.

Hillary Clinton has thus far failed to recognize this fundamental weakness of Trump’s candidacy. She should call it out openly. She should make the case that being filthy rich is not good enough to be president. At her campaign rallies, she could even play the movie’s famous theme song, “The Entertainer,” to underscore that Trump is nothing more than an entertainer and con man. Once the deception is exposed, the con is foiled. Once the magician reveals the trick, you cannot unsee it.

But if Clinton fails to reveal Trump’s truth, then Trump may well just pull off a real-life version of “the big con” and we will all suffer the calamity of The Sting.