“Money. D*ck. Power.”: "Unreal" deconstructs fantasies — and asks what TV looks like with women in charge 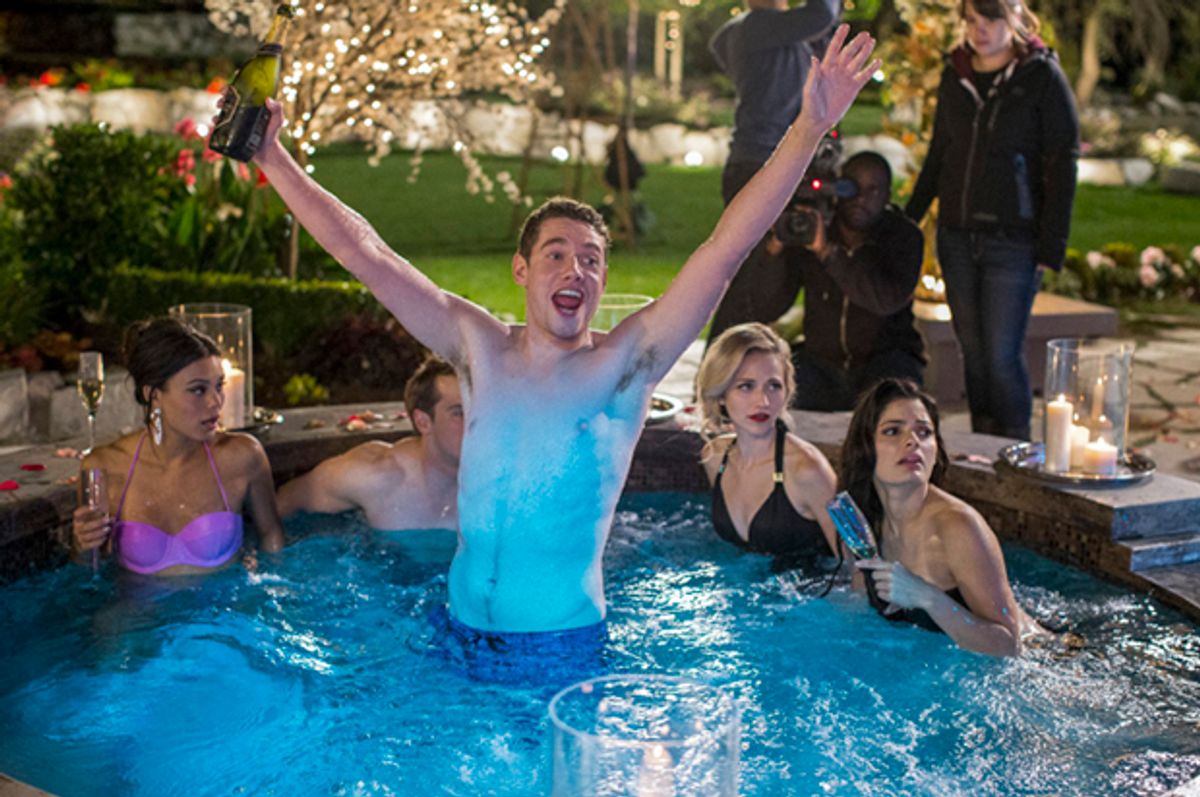 When we last left “Everlasting,” the fictionalized version of “The Bachelor” whose making is the subject of the Lifetime drama “Unreal,” our groom-to-be was left jilted at the altar. After a well-orchestrated set up by producers Quinn and Rachel, the show's so-called “winner” stuck it to Bachelor Adam on live television. “Every little girl dreams of this day, of this moment, but that doesn't mean I would go for it at any cost,” she says. “I realized he's a cheating slut. And while I might have eventually been able to forgive him for that, I had to accept the fact that he's just not that smart. He's an idiot. Definitely not the man for me.”

The line was so deliciously cutting because Adam's end goal was not a wife, but a business deal. He'd agreed to go on the show in the hopes of rehabilitating his tarnished image and, as a result, gaining the approval of his family and control of a property they owned. The public declaration of his stupidity proved that the effort was wanting, while Quinn and Rachel's scheme won them both the respect he so deeply craved.

In the premiere of Season 2, which will air Monday night, Quinn and Rachel drunkenly adorn themselves with matching tattoos, meant to serve as a constant reminder of these priorities: “money. dick. power.” they read. The party scene that follows which, in its lavishness, still seems seedy, is a thrilling exploration of the interplay between privilege and pleasure. (The latter being, of course, what makes the former fun.) “In that order,” Quinn declares, which creates a false sense of nihilism, suggesting that “money, dick, and power” are important enough ends to justify their broad set of means.

“Unreal” is, historically, at its worst when it constructs desperate situations just to illustrate how bereft of morality its main, manipulative characters are. A contestant's suicide last season was the show's creative low point, and abruptly wrenched an otherwise winning streak of episodes from their dark realism. “We killed somebody, didn't we?” Rachel asks Quinn in the season finale.

“Yeah, let's not do that again,” Quinn replies, in what was, hopefully, as much of a reminder to writers as her literal partner-in-crime.

Though not nearly as drastic, the early episodes of this season aren't entirely void of the same frustrating tendency to overstate what's at play. Ruby, for example, a civil rights activist and contestant, complains that she “dropped out of college” for nine weeks of filming, when she could, presumably, have easily gone through the routine process of taking a semester off.

Still, this season appears to be a departure from these exaggerated stakes. In fact, it pokes fun at the issues that serve as the bread and butter of lesser shows, including the one “Everlasting” lampoons. When a wealthy contestant complains that her father made a phone call to get her into school, Rachel replies, with a tone of faux-outrage, “Oh my god, your dad helped you get into Wharton? Rich girl problems are the worst!” Yet Rachel still manages to make a strong case that the work they're doing is important, that broadcast television matters. In convincing Ruby to go on the show, she notes that they're presenting millions of viewers with its first black suitor, and that highly-rated reality shows like “Teen Mom” and “The Real World” have had significant social impact. She isn't wrong.

If these high-minded goals lend “Unreal” gravitas, and self-awareness lends it humor, the near-constant defiance of expectation lends it suspense. This is especially true when it comes to the low-billed players in its ensemble cast, like a contestant producers had hoped to peg as a white supremacist who storms off the set when she meets suitor Darius, but not for the reasons we think. “Racism sure is confusing,” Rachel mutters.

And when Madison, a young, relatively inexperienced producer, is instructed by Rachel to exploit her mother's recent death to draw a sound byte out of a contestant, she complies, skillfully, but then vomits from the trauma. Rachel's ex-boyfriend, Jeremy, a self-righteous cameraman who waits until he's finished filming the scene to voice his outrage, turns the camera on her, and apologizes for Rachel's behavior. “That was amazing,” she gleefully replies.

Men haplessly swooping in to, in Quinn's words, “fix what wasn't even remotely close to being broken,” is another theme of “Unreal,” mirrored in a scene when Darius saves a “drowning” contestant who doesn’t need his help. Chet, the creator of “Everlasting” who, it was implied, was fired last season for gross incompetence, returns this season in the hopes of turning the show into a vaguely pornographic misogynist fantasy.

At moments, “Unreal” has the appeal of a sports game or Sorkin drama; it's fun to watch capable people at work. The reintroduction of Chet threatens this dynamic, and by episode two already grows tiresome, in no small part because his buffoonish incompetence seems to be contagious. It also stretches the limits of our imagination: he saunters back onto what is presumably a closed set and, using nothing but a vague sense of bro-ish camaraderie, manages to steal a cast member’s allegiance and reclaim power over what is no longer his show. (Did none of these people sign contracts?) In attempting to belittle him, Quinn instead offers him helpful advice, explaining logistics it took her years of on-the-ground experience to pick up. Experience which, at this point, is her strongest asset.

Chet's continued presence is so frustrating because he's an unworthy, and unnecessary, rival of Quinn. The conflict between Rachel's political goals and Quinn's interest in commercial appeal is not an uninteresting one. Chet's greatest creative contribution to the show this season is having the girls introduced in bikinis, a garment Rachel hoped to ban in the Season 1 finale. Then, it was Quinn who pushed back on the idea, advocating for the crude conventional wisdom that sex sells. The dynamic between Quinn and Rachel makes for great television, in more than one sense.

Yet Rachel's most triumphant moment occurs off camera, as she uses her newfound authority to shut down a public show of disrespect from male colleagues. That her authority is fleeting illustrates the falseness of her hope that “power” can insulate her from the pain of sexism. In reality, personal agency can only accomplish so much in the face of institutionalized racism and misogyny.

Still, moments of the new season offered something of a primer on the benefits of diversity. “Unreal” is about fantasies: the storybook romance, the perfect job. Early on, we catch a glimpse of another one: what would entertainment look like if women were in charge? It's a question one hopes this season will take the time to answer.