The myth of universal beauty: Actually, we aren't all beautiful—and that's OK

Inspirational songs and ads want us to believe we're all model-perfect—but can't we be empowered without beauty? 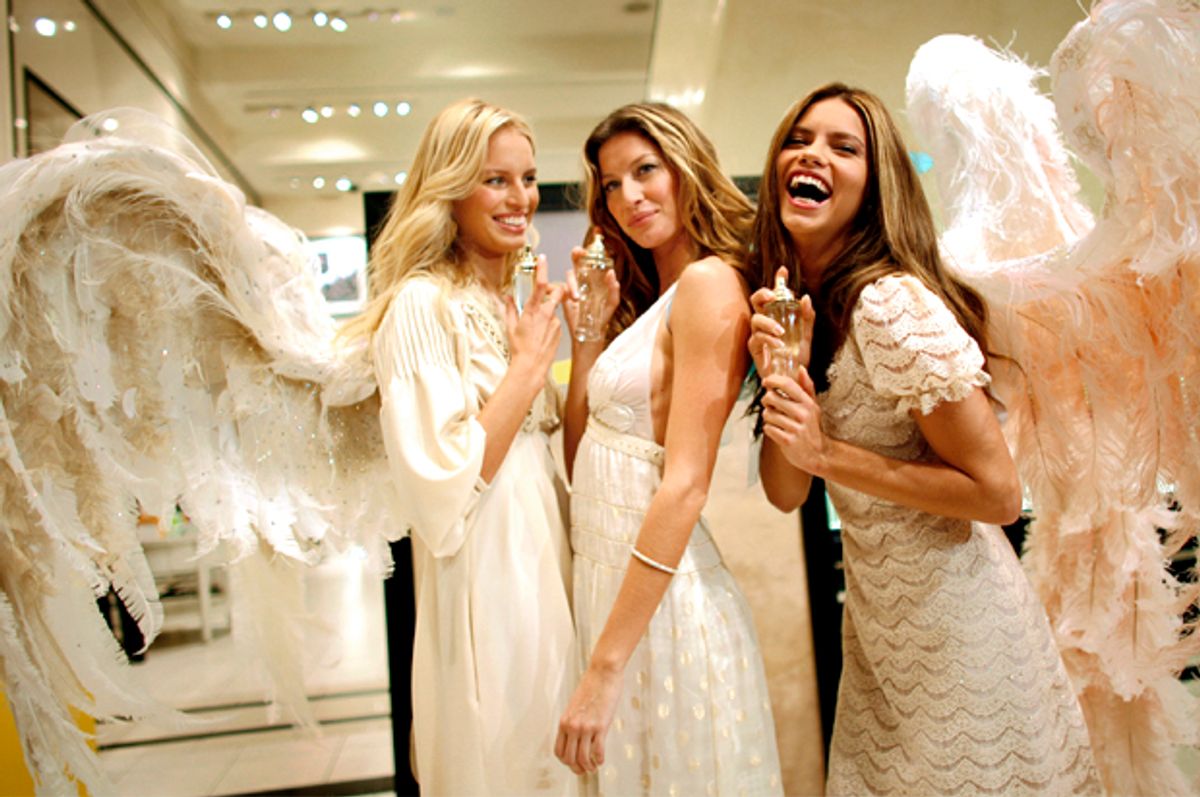 Recently, my brother invited me and my husband to a day party at Encore Beach Club, the Las Vegas pleasure dome that hosts superstar DJs like Skrillex and Diplo and David Guetta for hordes of turnt partiers. There are activities outside my wheelhouse (attending music festivals, football games, eating competitions)—and then there’s day partying: writhing beneath the Nevada sun, 104 noontime degrees caramelizing my shoulders, in a pool of bodies, beer cans floating by like driftwood. But I love my brother and rarely see him, so two weeks ago, despite a burgeoning sinus infection, I spent the weekend in Vegas.

My husband and I met my brother and his three friends on Sin City’s most glittering thoroughfare. Soon, we were in a line that snaked around one lobby of the Wynn’s kid sister, Encore. Though most women towered in epic wedge sandals and I’d chosen flip-flops, beneath my cutoffs and tank top I wore a bikini, and I liked to think my raspy voice—its full capacities vanished three days earlier—made me sound like I belonged.

“Oh yeah, Jo,” my brother joked. “You were tearing it up last night, right?”

We staked out two red cushions on a bench encircling a dwarf palm tree and promptly dipped into one of the pools. We bobbed and talked, drinking light beer from aluminum bottles. “We don’t have those,” a British woman named Sofie told me, laughing. Her blonde hair was heaped on top of her head and the neckline of her crocheted black one-piece plunged.

The bass pounded, warping songs I recognized into trance marathons. People speculated about when the deejay’s set would start. Men dunked their heads and shook off like dogs. A woman bent and revealed her thong bikini bottoms: on one ass cheek, there was a lipstick circle that her friends were recruiting random attendees to smooch. A lanky guy climbed onto one of the stripper poles islanded in the middle of the pool; he began doing a dance move I remembered from childhood Girl Scout sock hops. The fire hydrant? The sprinkler? A lifeguard whistled him down before I could verify the name with my company.

I was both scandalized and not to find day partying so unobjectionable. Was something wrong with me? How could I so easily look past the stratified problems that plagued the entire enterprise? Women were being objectified (my ticket cost thirty dollars less than my husband and brother’s); classism was reigning from the balconies circling the pool area, where fully-clothed dudes gripped drinks in glass and surveyed the general admission crowd splashing in what were coming to seem like feudal baths that grew discomfitingly warm.

Those thoughts breezed through my mind like the whippy Vegas winds. But as is often the case, the women’s room made everything clear.

I washed my hands, staring at the soap’s lathering, noticing how the sun had narrowed the colors I could see. All around me, women were courting their reflections. Women crowded around the mirrors, adjusting their boobs and bikini tops, redoing their hair, positioning their cross-body Chanel wallet-on-a-chains just so; one tiny girl regarded herself beatifically while she held out her arms for the attendant to slather with moisturizer. I could feel all their grooming as I worked, invisibly and futilely, to not see myself.

The occasion for this sleepover was a talent show. Rita, with an older girl whose hair was so blonde it gleamed like fluorescent light, was performing an uncomfortably sexy dance to Madonna. That’s how I learned what it meant to “Vogue.”

Before the talent show, I hung out in Rita’s bathroom. I sat on the furry toilet seat cover and watched her mom curl her hair. I wore black leggings, a jungle green shirt with a frill on the neck; I remember carefully choosing that shirt. I liked it: it bore dark, shadowy flowers.

When Rita’s head was a mess of gold corkscrews, her mom turned to me. “Let me put some makeup on you, JoAnna Banana.”

Look up, she directed, mascaraing my eyes. Rita’s mom reminded me of Gadget, the young female mouse in "Chip ’n Dale Rescue Rangers." I still remember when she told me she weighed ninety-seven pounds.

Five minutes later, my cheeks were blushed and my lips were colored a shade that reminded me of the Crayola hue Red-Violet. Rita was gone.

I don’t remember how I thought of my appearance before, but from then on it was easy to find evidence of my unprettiness. Who could miss it? Yearbook photos, class pictures, candid snapshots my mother took on vacations. When my grandparents told me I looked so pretty on my First Communion, I knew they were lying.

I could engineer the worst version of me in private. I would stare at myself in secluded mirrors, splaying my mouth and piggying my nose. Your face will stay like that, my mom admonished my brother when he crossed his eyes. I cherished that threat. If my face became deformed, I’d go from being unbeautiful to pitiable.

Of course, the lure of sympathy eventually obsolesced; it seemed a loser’s prize. Like many an outcast, I pulled myself up by my Doc Marten bootstraps and adopted a jaded attitude about my appearance. Looks were superficial, right? I didn’t want to be shallow. I starved myself—who wouldn’t rather be thin than pretty? Thinness was deep. I hyperbolized my angst: I lined my eyes with so much Wet ‘ Wild black they clicked when I blinked. But, thankfully, I also assigned value to other facets of myself: my mind, my imagination, my ability to be a good friend.

Now I wonder: was I stronger than I gave myself credit for? I survived high school unscarred by my lack of beauty. I was friends with three brunettes—the four of us formed a sort of eating-disordered, self-mutilating squad—who were pretty. I winced when I saw myself next to them in pre-Homecoming pictures, but that sense—that I was inferior to them physically—didn’t really make me hate on myself. I accepted the not-so-hard truth: Boys asked them to dances. Silver foxes, friends of their parents, hit on them. On weekends, one even modeled.

Yes, when I was feeling especially vulnerable, I consoled myself with the fact that trucks of maintenance men would honk at me while I ran—which worked until I realized that they might be mocking me. I’d chide my superficiality in self-talk: Did I really need the attention of sophomore boys? Was I hoping for an inappropriate grope at Christmas brunch?

What did bother me about not being beautiful came not from my own life, but from MTV. What grated on me was how the worst pop music insisted on touting universal beauty.

“You are beautiful, no matter what they say,” is the culminating choral variation of “Beautiful,” Christina Aguilera’s 2002 song. In the video, a lank-haired waif studies her bones; an achromasiac figure stands in a dark bedroom; two men brush noses and kiss; bullies torment a girl with braces to the ground.

My friends and I derided “Beautiful” whenever it came on the radio. Aguilera had gained weight, tabloids reported, and we read the song as a weird and unnecessary defense against her body’s change. But I disliked the message on a more personal level. I’d long learned that beauty was not a given. Beauty wasn’t part of everyone’s lot like birth and death. Beauty was like the ability to hotdog your tongue or wink without moving the rest of your face: fluky and impressive and extraneous.

I worry that our culture prizes beauty so highly that we believe everybody wants it. Should we all strive embody “a combination of qualities that please the aesthetic senses”?

These days, the ubiquity of beauty is peddled by the cosmetics industry. Remember the aughts? On The Dove Campaign for Real Beauty webpage, readers—presumably women, based on the image—are asked to “imagine a world where beauty is a source of confidence, not anxiety.” Dove, we are told, is working to “[widen] the definition of beauty.”

Surely the aim of this campaign was and continues to be bolstering women’s self-esteem; now, women are encouraged to banish body negativity from their tweets, to #SpeakBeautiful and #TryDove. But soaps and lotions aside, I think there’s something slippery about beauty being the currency that oils the wheels of our self-concepts. It’s homogenizing. How can anyone being offered a spot in the “widened” definition of beauty not feel like the last one picked for the dodge ball team? I’m not bashing body positivity, but I’m questioning if its possible when the definition of what’s positive is everything. Must it be marketed? Mandated? Shouldn’t there also be room for body negativity and even body neutrality?

What I think campaigns like Dove’s and songs like Aguilera’s want to celebrate is not beauty but individuality. We should embrace variety and difference, a bouquet not of one dozen roses but all manner of plants and branches and wildflowers. Some of those plants really aren’t all that pleasing to look at—what would our world be like if that was okay?

The day I returned from Vegas, I was walking my dog when a Los Angeles city bus covered with ads drove by. “I hope you feel beautiful because you are,” read the plug for Amazon's "Transparent". The words were plastered over Jeffrey Tambor's face; immediately, I shrugged them off. The times I have felt least beautiful were those when people insisted I was. I’ve seen—and ignored—myself in mirror, car windows, teaspoons, mixing bowls, stainless steel refrigerators, dark computer screens. I am uneasy about demonizing or glorifying appearance, about externalizing our self-worth. That uneasiness has nothing to do with what my eyes are or aren’t with or without makeup. That uneasiness comes from being asked to value a quality that I know is not a given, a quality about which I care very little, something I’m supposed to want—but don’t.