The right's long war on hope: How the GOP manufactures apathy, cynicism and rage

GOP's target is bigger than liberalism or Hillary Clinton, and Dems are running against something bigger than Trump 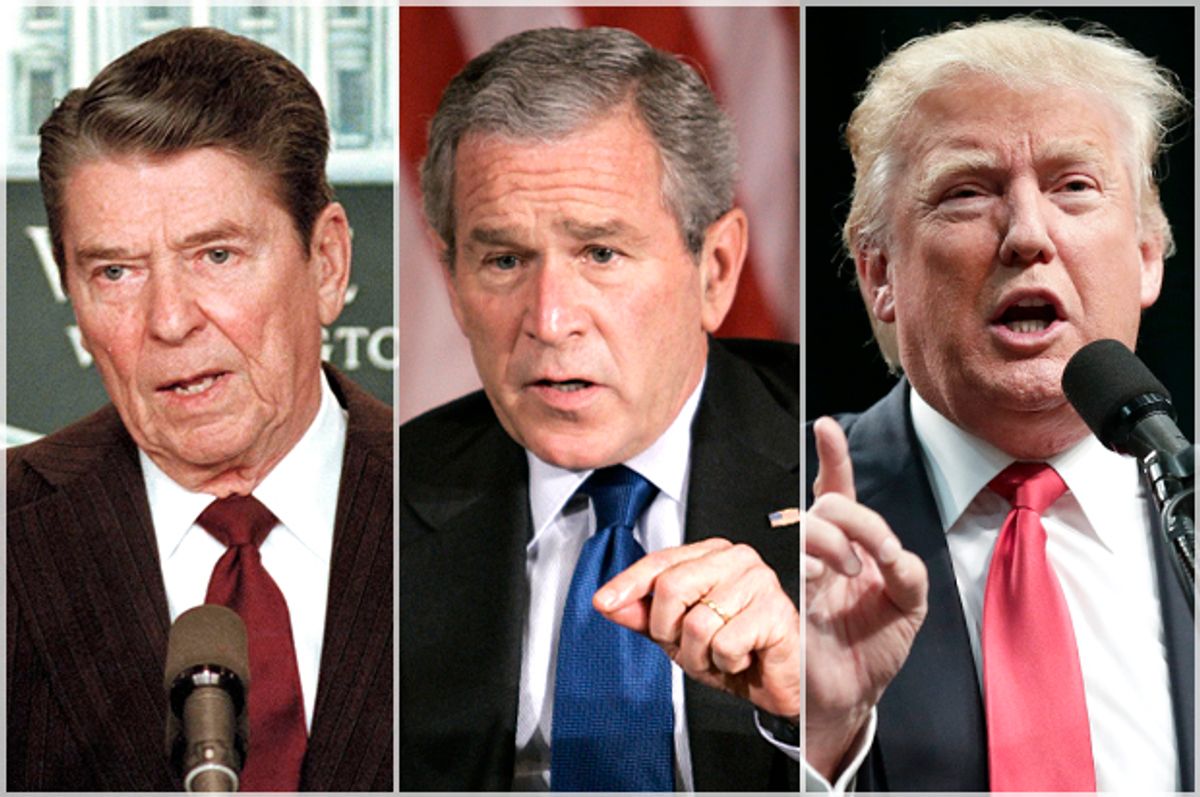 Back in 1967, the psychologist Martin Seligman conducted a famous psychological experiment at the University of Pennsylvania. He administered shocks to two sets of dogs. The first set could stop the shocks by pressing a lever, or, later jumping over a low partition. The second set had no control over the frequency or duration of the shocks. Even when these subjects were given the chance to jump over the partition, they lay down passively and whined as shocks were administered.

Seligman’s experiment was a vivid confirmation of what psychologists call learned helplessness. Sociologists have since suggested that this concept governs societies as well as individuals. When a political culture cannot achieve desired goals, voters fall into a state of debility, dependency, and dread.

This, in a nutshell, is the current state of the American electorate, though the more precise term is probably learned hopelessness.

This wasn’t always the case. Traditionally, periods of despondence and upheaval have led to a renewal of faith in political remedies: the New Deal, the Civil Rights movement, LBJ’s Great Society programs.

Over the past four decades, however, right-wing pols have cranked the Jeffersonian formulation (That government is best which governs least) to 11. “Government is not the solution to our problem,” Ronald Reagan declared in his first inaugural. “Government is the problem.”

This has been the guiding principle of modern conservatism. Its essential agenda has been to vilify and disable government on behalf of its corporate sponsors: slash tax rates and spending, deregulate, privatize. These policies have been an unmitigated disaster for most Americans. Just as important, they have infused a reflexive apathy and cynicism into our realpolitik.

Consider President Obama’s tenure. He was swept into office amid a genuine sense of hope and immediately set about repairing our reeling economy. A federal bailout saved the auto industry. Unemployment dropped. Growth picked up. And yet, even in the midst of this recovery, half of all Americans believed the nation was on the wrong track.

By the time Obama proposed his health care plan, wealthy conservatives had seeded and manured the Tea Party, a pale roving mob with no coherent ideology beyond contempt for Obama, and government in general.

Sarah Palin, the cover girl of this modern political nihilism, captured the gist of the movement at one of her many paid sermons before the faithful. In a tone dripping with snide glee, she asked Obama voters, “How’s that hopey changey stuff working out for ya?”

Actually, that hopey changey stuff was going pretty well. After a brutal battle, Obama managed to get the Affordable Care Act signed into law, making insurance cheaper and medical care more widespread. He ended the war in Iraq, killed Osama bin Laden, and kept the homeland safe. The economy continued to improve. He won re-election. And despite all this, more and more Americans told pollsters that the nation was on the wrong track.

Much of this has to do with the Fourth Estate’s incessant focus on political incompetence and strife. The corporations that own our largest media companies have discovered that there’s more money to be made in scandals than policies. Which is why reporters and pundits and political comedians desperate for audience share feast upon dysfunction.

But even without this distorting lens, our electorate has become habituated to a cycle of in which campaign promises curdle into broken vows. Palin may be a D-list celebrity at this point, but the cynical pleasure she took in mocking hope has become the default setting of American voters.

And in this sense, the conservatives—despite the risk of losing the presidency for a third straight term—have won. Because it turns out that for them, the true enemy was never any particular liberal politician or policy. It was the simple idea that voters might believe in government. Learned hopelessness was their endgame.

It now prevails all across our political spectrum.

It’s the reason many liberals rejected Bernie Sanders as a candidate, despite endorsing his policies. Because, as we’ve heard so often, his ideas would be DOA in Congress.

You can hear the same sort of misanthropic surrender among the Sanders faithful, such as Susan Sarandon, who notoriously hinted that she might not vote for Hillary because Donald Trump would be more likely to foment a revolution.

Learned hopelessness is, in fact, the force that has propelled Trump past a clown car full of more qualified rivals. He alone knows how to give voice to the rage that animates voters, in the absence of genuine hope.

Learned hopelessness is also what gives Trump more than a puncher’s chance to capture the White House.

Why? Because an increasing percentage of voters—and reporters—no longer respond to earnest policy proposals. There is an implicit sense that anything Clinton promises to do will be obstructed anyway.

A few weeks ago Clinton unveiled a plan that has been dubbed Medicare for More, her effort to expand coverage for adults in their 50s. It’s not as bold as the Sanders proposal, which is Medicare for All. But it represents a significant effort to reshape Obamacare.

There has been almost no coverage of these proposals. Instead, the media has focused obsessively on Clinton’s likability, her damn emails, her Sanders problem.

This pattern leaves Trump free to bellow vague promises about building walls or cutting deals. Nobody honestly expects him to set out a realistic legislative agenda, because remember: those are for suckers anyway. His campaign isn’t about playing politics so much as condemning it.

Clinton’s advisors are hoping that as the general election wears on, voters will tire of antics, and start to take the presidential contest more seriously than a reality TV show. They would like the election to be a contest of serious ideas, not insults and accusations.

But serious ideas can only take root in a political culture where personal and collective aspiration endures.

In considering the challenge that lies ahead for Clinton and her team, it might be instructive for her to revisit Seligman’s 1967 experiment.

It turns out that the dogs suffering from learned helplessness—the ones being shocked on an electrified grid—were not swayed by threat, rewards, or even observed demonstrations of how they might escape.

The only thing that worked, Seligman found, was for his experimenters to physically pick the dogs up and move their legs in such a way as to replicate how they might escape. This had to be done at least twice before the dogs would rescue themselves on their own.