Flustered, frustrated and frantic: The university debacle has put Donald Trump on the ropes

The GOP nominee is desperately trying to distract the public from his university scandal. He's failing -- miserably 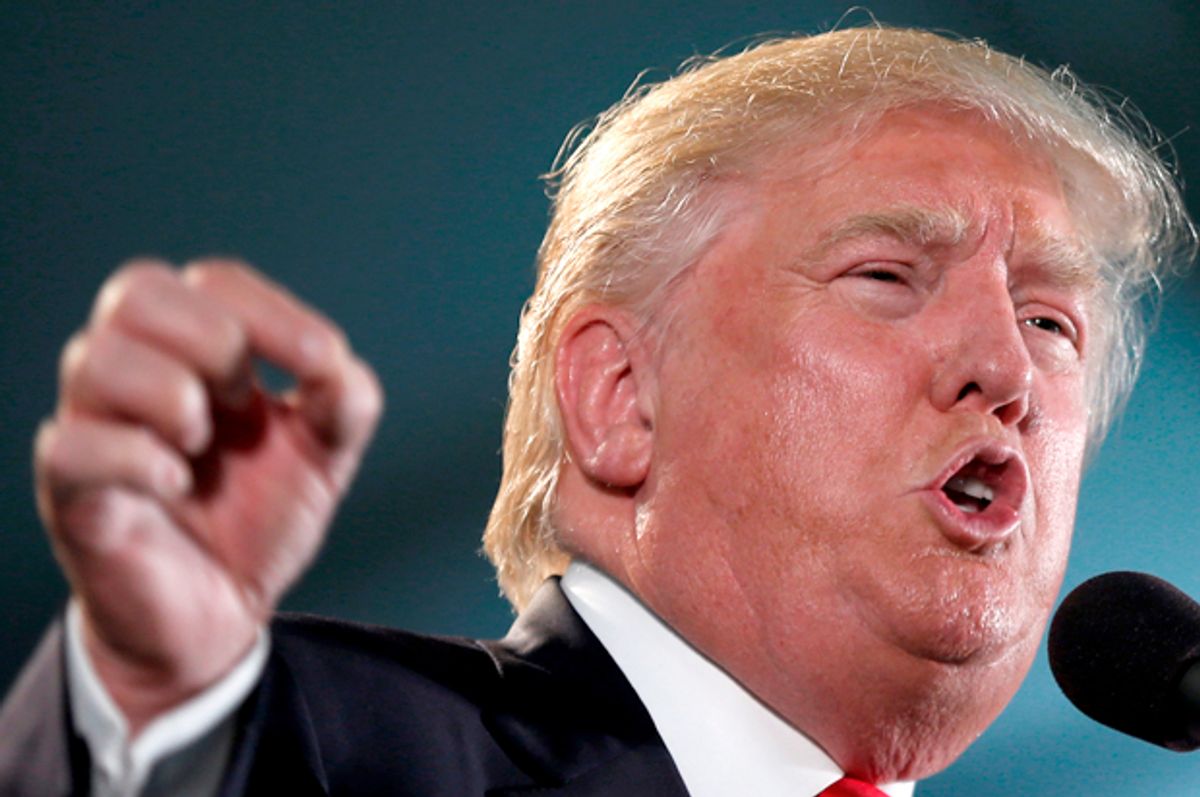 Why is Donald Trump so out of sorts?  Against all odds he managed to win the Republican nomination against the best and brightest stars from all factions of the Republican party. He did it without spending nearly as much money as the rest and without any study or preparation. He dominated the media which reportedly gave him a couple of billion dollars worth of free airtime. He came out of the primary five weeks ago on top of the world, ready to take on the Democrats who were still skirmishing in their primary, divided and at each others' throats.  It was the perfect time to make that presidential "pivot" from the primary to the general and start to show non-Republican Americans that he could be their president too. That didn't happen.

Instead we've seen Donald Trump do nothing but air his endless grievances, whine about the press, complain that he's being cheated, and double down on his dyspeptic racism, sexism and xenophobia. The more people tell him to cool it the more he explodes in public. He is the most ungracious winner in American politics. What gives?

If one had to guess it's that he thought that he'd already gotten the hardest hits he was going to have to take. It seems he believed that because he faced a large group of GOP heavyweights and had the rapt attention of the press for six months that he'd passed the crucible and he'd get unquestioning adoration from here on in. Unfortunately, this is where political inexperience and an unwillingness to listen to anyone but sycophants and the voices in your head creates a problem. The primary was  a cakewalk compared to the general election for a number of reasons, the most important being that his rivals were all walking on eggshells trying not to offend his voters.  Most of them were also Republican office holders and professional politicians who have a responsibility to their party and they generally try not to destroy their own members just in case they become the nominee. By the time they realized that it might actually be Donald Trump it was too late.

The press meanwhile was stuck in a different kind of spin cycle. They mostly just gawked at the spectacle like they were reporting on a 200 car pile-up on the interstate. They didn't dig very deeply because, like the Republicans, they simply could not fathom that he would actually become the nominee. And frankly, they never really devote a ton of resources to each primary candidate. They do some perfunctory digging and check out oppo from the various rivals but they never go very deeply into the candidates until they get the nomination.  But once the nomination is in hand, it's no hold barred and the press is going to delve into the nominee's business, personal life and history in every way. Apparently, Trump didn't know this.

And he's not handling it well. There are ominous signs that his campaign is imploding, mostly due to his micromanaging and inability to cut loose his fawning primary operatives in favor of serious professionals who know how to wage a general election campaign. He is more undisciplined than ever from his embarrassing tweets to obtuse comments on the stump like "look at my African-American! Look at him!" (It turns out the man wasn't actually a supporter.)  He has dodged and prevaricated about why he won't release his tax returns, using excuses that only a child could believe, raising questions about whether he's actually as rich as he says he is.

When the Washington Post published an expose on the Veterans fundraiser he held last winter and revealed that he had not written his own pledged million dollar check, he went ballistic on the media at a wild press conference, even calling a reporter a "sleaze" to his face. It was angry enough for reporters to be taken aback despite the fact that he commonly calls them disgusting, despicable liars at his rallies.

And when Hillary Clinton hit him very hard with a tough speech last week in which she used his own words against him to make the case that he's dangerously unfit for the job, his response was first unusually tepid — he complained in a tweet that she wasn't "presidential"  — and then recklessly authoritarian.  At a rally in San Jose, he let fly (at the 13:55 mark) with a long tirade about how she is President Obama's lapdog who is doing his bidding so he won't throw her in jail ("it's "yessir, Mr President Sir! Yessir! What would you like?! What would you like me to say here sir?!")Then he said this:

So we'll see what happens, I don't know. I've always had great confidence in the FBI, I have great respect, I know some FBI folks, I've always had great confidence in them. I can't believe that they would let this go... I'm telling you, it's a great system we have, we have a great country, we're going to make it a lot greater by the war, we love our country, but look, we love our country and I don't believe our country can let her get away with this crime, I don't believe it. So we'll see. And you know what? If they do let her get away with it, it will be a big topic of conversation on the campaign trail, I can tell you that.

And then if I win? (pauses, shrugs dramatically, shakes his head) It's called a five year statue of limitations. If I win ... everything's going to be fair but I'm sure the Attorney General will take a very good look at it from a fair standpoint, ok? I'm sure. I think it's disgraceful.

In interviews with CNN's Jake Tapper and CBS's John Dickerson, he repeated this threat to have her criminally charged  ("very fairly" of course) by his own Justice Department if they fail to jail her before the election. When Dickerson asked what crime it was she was supposed to have committed he said, "she's guilty of the server, she's guilty of - you look at confidential information, I mean, all of the information that probably has gotten out all over the world. And then you know what else she's also guilty of? Stupidity and bad judgment."

If stupidity and bad judgment are federal crimes, Donald Trump would be serving a hundred consecutive life sentences.

He evidently does not understand that a president does not have the power to have someone thrown in federal prison if they fail to do his bidding nor is it permissible for a presidential candidate to threaten to sic his future Attorney General on his political opponents.  It's called abuse of power and it's a very serious business. (He keeps making this "mistake" about presidential power in various contexts and maybe it's time that people took him at his word.)

But Trump was clearly rattled by more than just criticism by Clinton and the press about his comments and his fundraiser. He's edgy and he's agitated in a way we haven't seen before and it seems to mostly be centered around the questions about his business practices.

There has been some talk about Trump University for a while now simply because there have been a bunch of lawsuits brought against it all over the country. Back in 2013, the New York Attorney General brought suit against Trump for running a bait and switch operation and calling it a "university" which is illegal. The press has been digging into this scam more seriously now that Trump is the presumptive nominee and it clearly makes him nervous.

That may be why at his San Diego rally last week he launched into a bizarre 15 minute tirade against the judge overseeing one of his lawsuits. And what he said was shocking:

“I think Judge Curiel should be ashamed of himself. I think it’s a disgrace that he’s doing this.The judge, who happens to be, we believe, Mexican…I think the Mexicans are going to end up loving Donald Trump.”

The judge is American, born in Indiana. But that didn't stop Trump. In successive interviews over the past few days he has reiterated his view that the judge was giving him unfair rulings because of his "Mexican heritage". Trump said over and over again "I'm building a wall! It's an inherent conflict of interest" as if that explained it perfectly. On Face the Nation when John Dickerson asked if he believed a Muslim judge would treat him unfairly because of his proposal to temporarily bar Muslims from entering the U.S., Trump replied: "It's possible, yes. Yeah. That would be possible, absolutely."

He claimed it is simple common sense and blamed the controversy on political correctness. No matter what any of his interviewers said he was obstinate in his insistence that Judge Curiel was biased against him because he's "building a wall."

This is a truly ugly charge and one that goes way beyond anything we've seen in a presidential race before. It's one thing to criticize a federal judge. People do that all the time although presidential candidates generally understand that it's important to show respect for the system and leave that sort of thing to others. But to say that judges of Mexican ethnicity or Muslim religion are presumed to be biased due to their backgrounds if they rule against him in a legal proceeding is beyond the pale.

Trump probably believes this. One can guess that he thinks a woman judge could only rule against him out of similar bias. And he would likewise find it absurd if the plaintiffs in one of his lawsuits said the same thing about a white male judge. He is a racist, sexist bigot. But his behavior points to something else as well. He's throwing up whatever distractions he can to muddy the waters about this Trump University issue. And he's fraying around the edges as people begin to look more closely at all of his business ventures, many of which seem to be similar scams, like Trump Mortgage and this multi-level marketing scheme, ACN.

It appears that Donald Trump agreed to sell his name to just about anyone who asked him, no matter how cheap or fraudulent. Why would he do that? Perhaps the question he really doesn't want to have to answer is, "does it make any sense that a billionaire would be involved with a series of tawdry, snake oil con games?"  It looks like he'll say anything to misdirect the press and keep them from asking it.