Karl Rove to Donna Brazile: “I did you a great favor bringing you into politics in the 1860 campaign and this is how you repay me?" 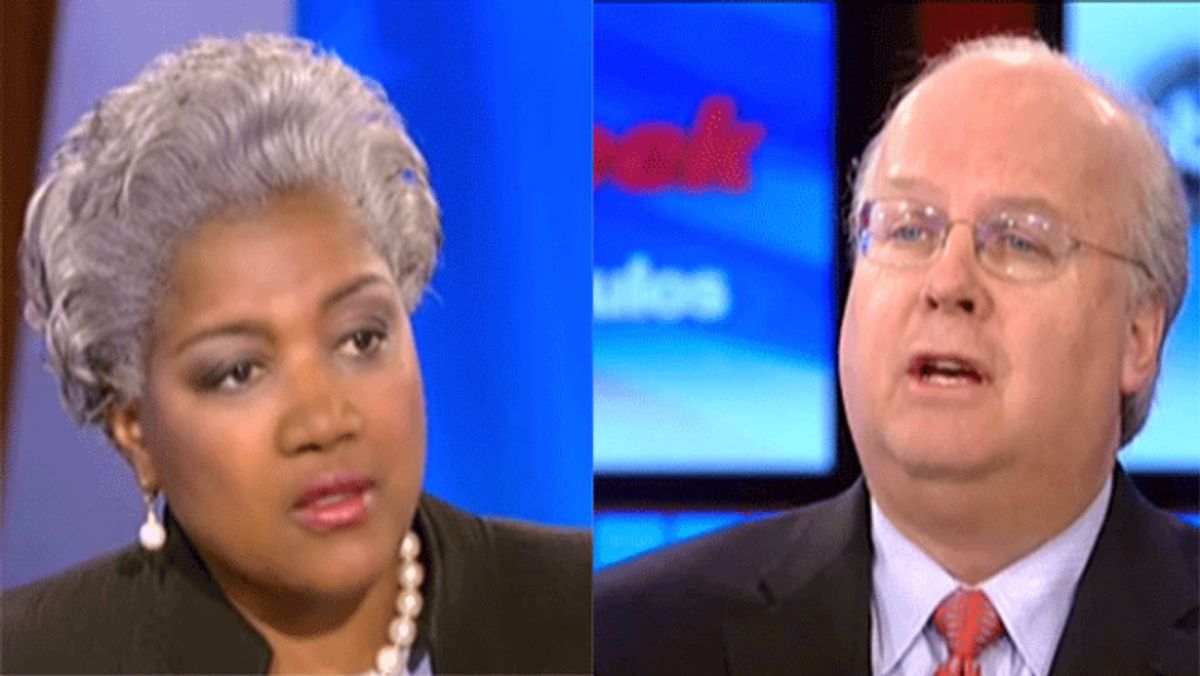 Karl Rove, George W. Bush's infamous "brain," reportedly held a secret meeting with Donald Trump at the home of Las Vegas casino magnate Steve Wynn recently, but it is the comments he made at a closed-door hedge fund conference in Las Vegas last month that actually provide a better insight into the GOP's post-primary coalescing and minority outreach in this, the Year of Trump.

“I did you a great favor bringing you into politics in the 1860 campaign and this is how you repay me?" the former White House aide and Fox News commentator told Democratic operative Donna Brazile during a panel before billionaire hedge fund managers last month, taking a bizarre singular ownership over the eventual enfranchisement of former black slaves.

According to the Financial Times, Rove told the Las Vegas crowd and his sparring partner Brazile, that the Republican Party had done more to extend freedoms for all peoples in America than the Democratic Party -- pointing to the election of Abraham Lincoln and the eventual passage of the 13th and 15th Amendments under Republican leadership.

"We’re happy you got the right to vote but it wasn’t your current party that was responsible for it,” Rove reminded Brazile, the first African-American chairman of the DNC, at the conference hosted by Donald Trump supporter and hedge fund manager Anthony Scaramucci.

Brazile confirmed Rove's tone-deaf comments in an email to Salon, pointing out that his comments were made in "jest" and noting that she ably handled his trolling, reminding Rove that as an African-American woman, she would have still been locked out of the voting booth until 1920, adding that both the the 19th Amendment and the Voting Rights Act of 1965 were passed under a Democratic president.

While it is hardly surprising that the man who joked that Brazile owed him fried chicken a few years back would make comments that the Financial Times described as "patronizing and insensitive," the most noteworthy part of this entire exchange is that it took place during a conference meant to soften the image of fat cats on Wall Street in hopes that they would face political attacks from populists and “be proud, not embarrassed,” according to Carlyle Group co-founder David Rubenstein. From the Times:

At the same conference, run by SkyBridge Capital, a company that invests in hedge funds, John Boehner, the former speaker of the US House of Representatives, put forward a solution: Wall Street and its cohorts simply needed a makeover.

“You look at what Wall Street does, what it means for job creation, economic growth . . . there’s a great story to tell. But if you don’t tell it, nobody else is.”

In fact, there are many great stories to tell about the hedge fund industry. It helps make capital markets more efficient and provides funding for educational initiatives, scientific and mathematical research, and philanthropic efforts such as the Robin Hood Foundation, an anti-poverty charity in New York. It is populated by professionals who generally work hard and are intelligent.

It is worth noting that there were no black speakers or moderators from the industry, and women accounted for less than 15 per cent of the speaking or moderating slots.