Caught between a Trump and a hard place: The endorsement conundrum facing Republican leaders

GOP leaders face conflicting incentives: wanting to keep their jobs and needing to distance themselves from Trump 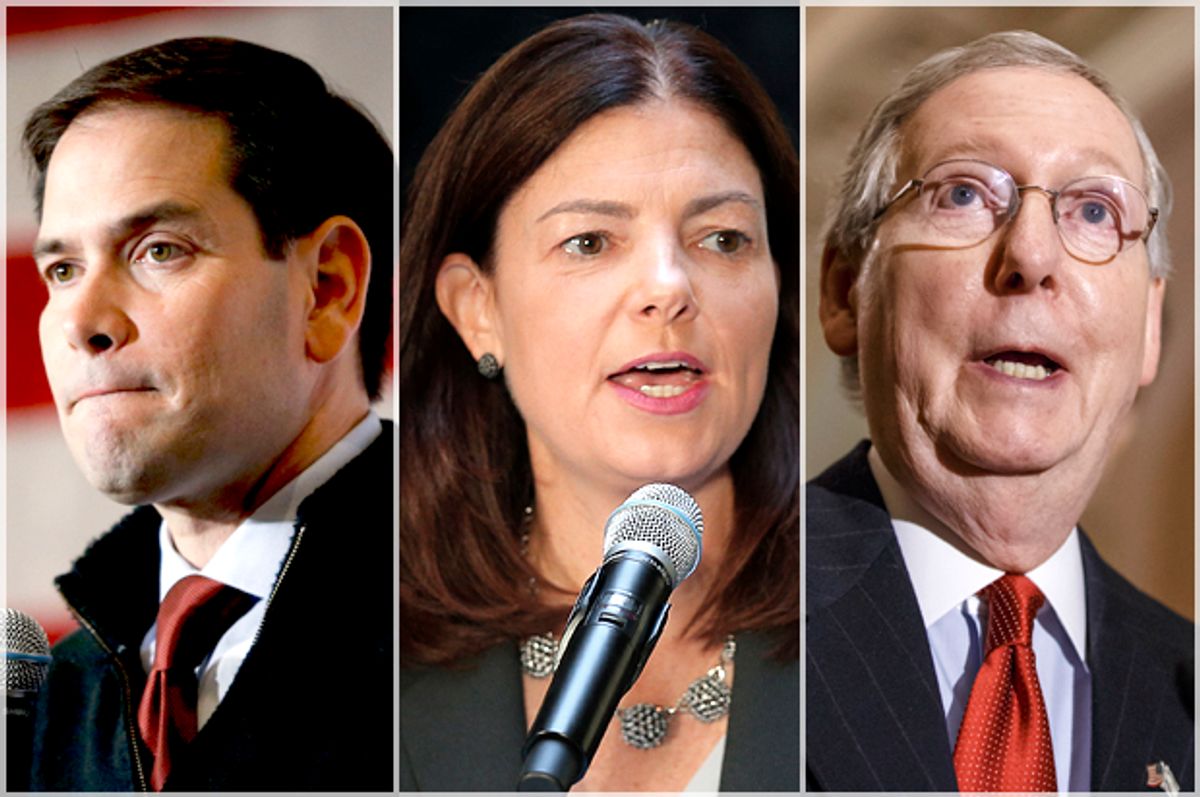 How long can the Republican Party hold out before even its most widely-recognized members give up on winning the presidency and denounce their party’s candidate in forceful and unqualified terms? This question occurred to me as I watched the relatively mild rebukes several party members have been directing at orange-hued rage ball Donald Trump over his racist whining about Judge Gonzalo Curiel. Because the election is 153 days away, and there is no way the GOP can maintain what half-hearted backing it has given Trump for that long. Not if he continues the attacks on Curiel or more stories like this one leak out.

Right now, the anti-Trump movement still seems confined to the consultant and “intellectual” wing of the Republican Party. But high-profile elected officials like Lindsey Graham now seem to have climbed on board, which makes people wonder if this could be the start of a cascade.

As Paul Ryan and Chris Christie showed on Monday morning, many visible party leaders are stuck. They have endorsed a flat-out racist to head their party. And the same cowardice that led them to do so even after they had also, in Ryan’s case, denounced his past comments, is now keeping them from rescinding those endorsements. Apparently it is better for their party to make common cause with the white supremacists who love Trump than admit that Hillary Clinton, for all her faults, is a better representative for America in the 21st century than the GOP nominee.

It is a tough position for Republicans, especially those running for re-election, to find themselves in. Not that anyone should feel sorry for them, since the party brought this nightmare on itself. For starters, Trump’s racism was well known to anyone who watched him go full birther during President Obama’s first term. Or remembers his conduct during the Central Park 5 case in the late 1980s. Or the time he and his father were sued for refusing to rent apartments to African-Americans in the 1970s.

But Republicans have for years winked at and encouraged the know-nothing-ism within their party that led to a brainless lunatic like Trump eventually capturing the nomination. (Hi, Sarah Palin!) They have ridden that strain of idiocy to electoral victories to sizable majorities in Congress and in state legislatures. And now they are trapped between wanting to keep their jobs and not fully committing to following Trump’s craziness wherever it leads them.

Thus you had Mitch McConnell on “Meet the Press” on Sunday, telling Chuck Todd in an unenthused monotone that he “couldn’t disagree more” with Trump’s comments on Curiel, while also reiterating that he will continue backing the candidate’s campaign because “the party of Lincoln wants to win the White House.” (To be fair to McConnell, I’m not sure he’s capable of speaking in anything but that monotone. The man has all the charisma of wet Styrofoam.)

Thus you had Marco Rubio, one of the hapless candidates Trump steam-rolled on his way to the nomination, and who had recently said he would be willing to be a surrogate of the campaign, saying in effect “I told you so” to the public with regard to his warning that Trump would spout a lot of nutty garbage on his way to November. But is Rubio re-thinking his support for the real-estate mogul? Well no, he “gave my word I would support the nominee.” So much for that profile in courage.

Thus you had Kelly Ayotte, locked in a tough re-election bid for her Senate seat in New Hampshire, calling on Trump to retract his “offensive and wrong” statements, while also maintaining that she will “support” but not “endorse” the candidate this fall. At least even Ryan admitted that was a distinction without a difference when he endorsed Trump last week.

That “support but not endorse” semantic dodge is one that Republicans all over have been trying to sell. It is a perfect example of the milquetoast nature of people like McConnell and Ayotte and Rubio. It’s a cheap effort at having it both ways that might set to beating the fickle heart of Washington Post columnist Jen Rubin, but should not be mistaken for anything but full-on ass-covering.

After all, McConnell and Ayotte and Rubio and Ryan can’t have the GOP base mad at them if they want to maintain their power. (Yes, including Rubio, who can still change his mind about running for re-election, and might very well do so when he realizes that in any job besides Senator, he might be expected to work for a living.) And the base in its infinite wisdom has made clear that it loves Donald Trump. But they also can’t bring themselves to support a racist, because they know the party’s embrace of Trump is going to destroy its relationship with women, minority voters, and just about anyone who is unfamiliar with Stormfront for the next few generations. (I would suggest that deep down they also know that supporting a racist is morally reprehensible, but I’m not feeling generous enough to assume that they do, in fact, know that.)

Beyond that, assuming Clinton wins the election, McConnell et al. want to be able to say they fought hard to keep her from reaching the White House and continuing to steer the country down the path of the full-on socialism they are always claiming Democrats will usher in at any moment. But how can they say that if they didn’t back her opponent in the general election? That is not a question they want to have to explain to angry Republican voters who will still be suffering under the yoke of Obama policies that will remain in effect, like historically low marginal tax rates and affordable health insurance.

Being loyal soldiers, they won’t join the “Never Trump” movement’s quixotic effort to persuade someone from National Review’s writing staff to run an independent campaign, or join the Libertarian Party. So they are stuck in this uncomfortable netherworld, hoping to maintain congressional majorities and their own seats while trying to appear to support the presidential nominee without supporting the presidential nominee. It’s quite a tightrope to walk, and no one should have any faith any of these folks will be able to do so for another five months.