No way out for Trump-backing Republicans: He's doubling down on racist remarks as GOP leaders struggle to respond

Rubio, Burr and other Republicans are feeling the blowback from Trump's attack on Judge Curiel 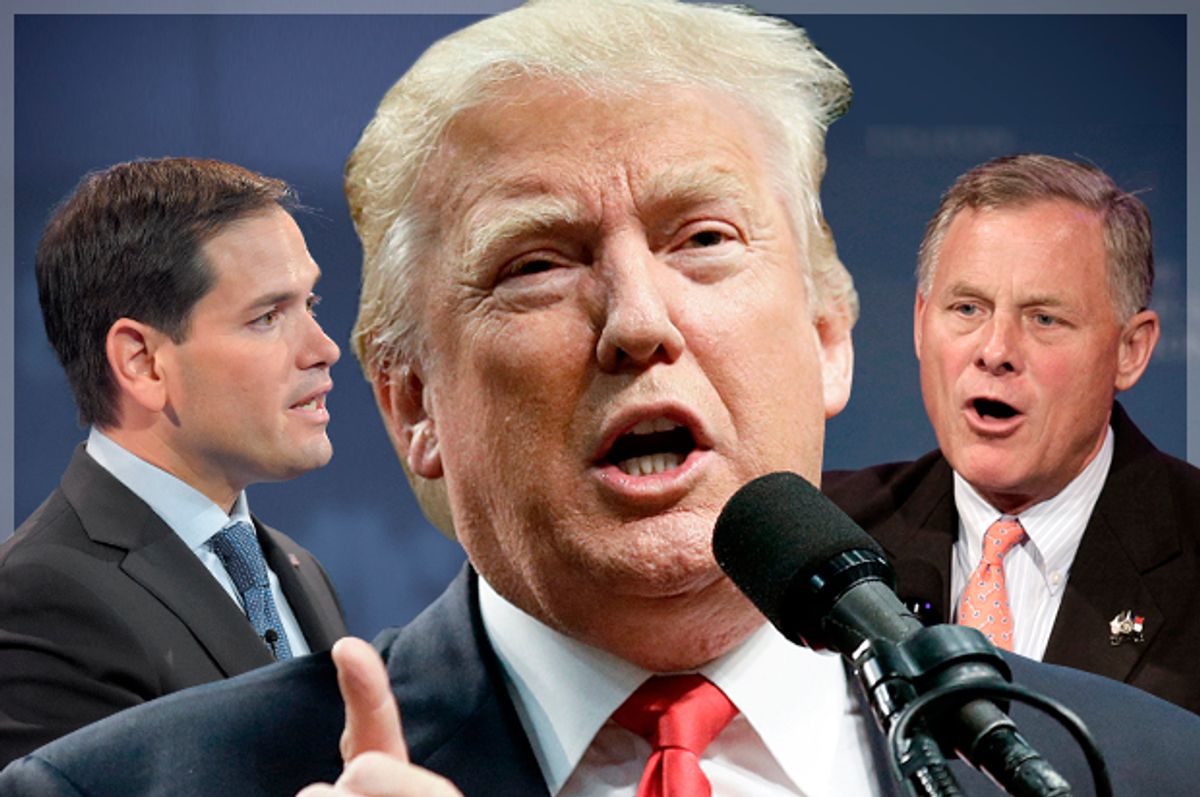 The list of Republicans endorsing Donald Trump has grown considerably in recent weeks. Most of them, like House Speaker Paul Ryan and Senate Majority Leader Mitch McConnell, can't quite allow themselves to use the word “endorse,” but that's what they're doing. And it's painful to watch.

It's going to get worse, too.

The GOP Trump train was already full of uneasy passengers, people who know he's a charlatan but are too cowardly to take a principled stand. Things escalated this week when Trump let loose a string of nakedly racist statements about a Mexican-American U.S. District Judge (Gonzalo Curiel) and promptly followed it up with another, equally racist statement about a hypothetical Muslim judge.

The fallout has been predictable and not a little hypocritical. In addition to Ryan and McConnell perfunctorily denouncing Trump's comments, we've also seen Marco Rubio speak out. In an interview with WFTV, the Florida senator said “That man [Curiel] is an American, born in the U.S., a judge who has earned that position. I don't think it reflects well in the Republican Party. I don't think it reflects well on us a nation.” Rubio added: “I ran for president and warned this was going to happen.” Indeed you did, senator. And yet you endorsed Trump just a few weeks ago anyway, despite having warned about the direction he was taking the country.

And then there's Richard Burr, the Republican senator from North Carolina, who said "I don't think there's a place for the comments that were made," only to admit immediately thereafter that Trump's racist remarks won't cause him to reconsider his endorsement because they weren't "inconsistent with things we've seen up to this point in the election." Translation: I already knew Trump was a racist before I endorsed him, so why would I flip now?

Lindsey Graham, who spent most of the primaries explaining why Trump was a catastrophe before quietly urging fellow Republicans to fall in line, is now exhorting his colleagues to rescind their endorsements. “This is the most un-American thing from a politician since Joe McCarthy,” Graham told The New York Times. “If anybody was looking for an off-ramp, this is probably it. There'll come a time when the love of country will trump hatred of Hillary Clinton.”

You'd think that time would've occurred when Trump proposed banning all Muslims from entering the country or when he suggested killing the families of suspected terrorists or when he propounded birther conspiracies, but nope, this was the final straw. As I wrote yesterday, the time for Republicans to criticize Trump has long past. Claiming an American judge can't do his duty on account of his Mexican heritage is revolting, but no more or less revolting than a dozen other things Trump has said or done. Hence all this moralizing from Republicans feels flat and empty at this point.

At any rate, you can expect more angst from Republicans in the coming months. The price of hopping aboard the Trump train is going to rise immeasurably between now and November. Trump's statements about Judge Curiel have been universally loathed, and yet he's made it clear he has no intention of backing away from them. In fact, as is his custom, he's doubling down.

According to a report by BloombergPolitics, Trump held a conference call with supporters this week and encouraged them to defend his comments, not apologize or equivocate. “We will overcome,” Trump said. “And I've always won and I'm going to continue to win. And that's the way it is.” It turns out Trump's official position is that the people who are asking why he made those racist statements are themselves the true racists. “The people asking the questions – those are the racists...I would got at 'em.” So that's how this is going to play out on Trump's end. He will drag the conversation to deeper depths, and take everyone who “endorsed” him for the ride. The contortions from Republicans forced to criticize him without actually renouncing his candidacy will be something to behold.

None of this is surprising. This is who Trump has been since he lunged into presidential politics. He won't back down. He's going to own every stupid and hateful thing he says. And now, because they opened their doors to him, the Republican Party is going to own it too.