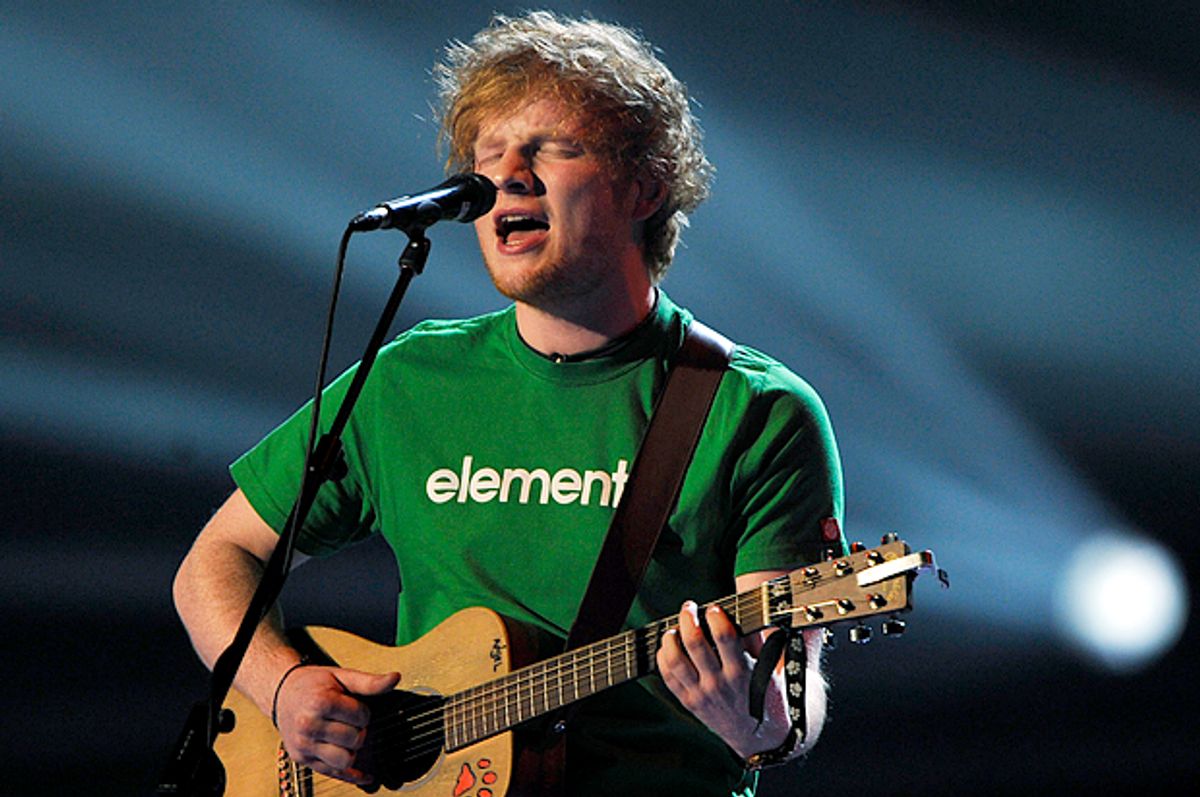 Another musical lawsuit is about to break, and with the memory of Robin Thicke’s loss to the Marvin Gaye estate over the song “Blurred Lines” still fresh, and a suit over “Stairway to Heaven” coming up, it’s beginning to look like these might become common.

The newest suit, for $20 million, alleges “verbatim, note-for-note copying” of Ed Sheeran’s hit “Photograph” and a song from the TV show “The X Factor” recorded by Matt Cardle. The original song, “Amazing,” was written by the songwriters Martin Harrington and Thomas Leonard. “Perhaps most notably,” The Hollywood Reporter notes, “the plaintiffs are represented by attorney Richard Busch, whose last big copyright lawsuit was on behalf of the Marvin Gaye family over the hit, ‘Blurred Lines.’ That one resulted in a head-turning $5.3 million judgment.” (There were all kinds of problems with the song’s lyrics and video, but those were not actionable.)

If you believe in copyright and artists rights, as I do, you don’t want a songwriter’s work to be ripped off. But this is getting tricky. Thicke and Pharrell Williams lost “The Blurred Lines” case largely because of the song’s “feel,” in Williams’s words, not its notes. But the attorney here seems to be relying on the actual sheet music.

As THR describes it, “In particular, there's the chorus, which according to the complaint shares 39 identical notes — about 70 percent — in pitch, rhythmic duration and placement in the measure. The songs' similarities reach the very essence of the work,’ states the complaint. ‘The similarities go beyond substantial, which is itself sufficient to establish copyright infringement, and are in fact striking. The similarity of words, vocal style, vocal melody, melody, and rhythm are clear indicators, among other things, that 'Photograph' copies 'Amazing.'"

It makes you wonder: What is a song: Is it the feel? Is it the instruments used and the way their voices blend? Is it the melody? The chord changes?

To a side-by-side listening of both songs and a look at their musical notation, they certainly have some similarities. Both are power ballads in E flat, and while the chord progressions have a lot in common, so do most songs like this. Both move from the tonic to the dominant – from E flat to B flat -- which is a pretty familiar shift, and don’t do anything too tricky from there. If we compared two blues songs, the match would likely be even closer.

How about their feel? Both songs have soaring, sincere choruses in which the singer pours his heart out. But again, both are pretty generic and neither does anything all that distinctive. Sheeran’s voice is so different from Cardle’s that the songs hardly sound like carbon copies. But to some judges, this won’t matter.

There are real cases of musicians ripping off other musicians; Zeppelin was caught in this several times and will have to defend itself again over the opening melody of “Stairway to Heaven.”

My fear is that the huge amount of money at stake here, with lawyers getting a sharper and sharper sense of what works in court, and with software that can find similarities, we’re about to open the door to a lot of extraneous suits.

Is there a percentage of shared notes, or chords in common, that make something plagiarism? Does “feel” matter? The next year or so may see a strict codifying of all this. It may be to the advantage of a few musicians who come away with enormous payouts, but it might not be good for music itself if musicians live in fear of unconsciously duplicating a song they’ve heard. Here’s hoping that future judges understand that borrowing is part of the process for even the most original artist, and proceed with caution.