"UnReal" and the broadening of prestige TV: Will the Emmys reward excellence if it doesn’t look like "House of Cards" or "Mad Men?"

The Emmys still want to favor familiar male antihero dramas, even as TV explodes with different genres and stories 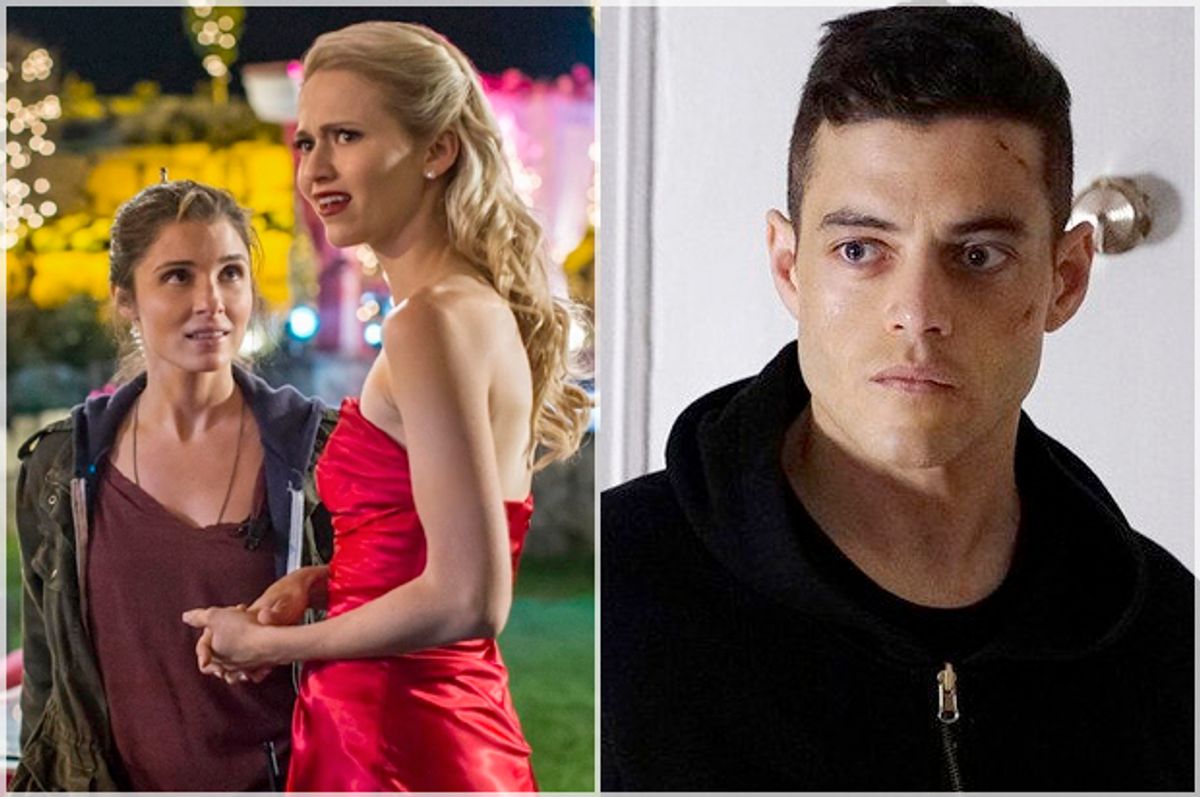 “UnReal” hopes to boldly go where no Lifetime scripted series has gone before: the Emmys.

The acclaimed reality television satire, whose second season debuted this week, was a critical cause célèbre after bowing on the women’s network last summer. One of the things that made the show so fresh and surprising is that given Lifetime’s previous pedigree, “UnReal” wasn’t on anyone’s radar. Unlike “Mr. Robot” (whose sophomore season will soon bow on USA), it didn’t have a familiar face to generate interest in the show. The Sam Esmail-produced technothriller is part of a career reinvention for late ‘80s/early ‘90s icon Christian Slater (“True Romance”) who won a Golden Globe for his performance. In contrast, the star of “UnReal” is Shiri Appleby, best known for playing a science whiz on the WB’s alien high school drama “Roswell.”

That quickly changed after the show earned rave reviews (the New Yorker’s venerable Emily Nussbaum placed it in first on her nonsequential year-end list) and major awards recognition. Constance Zimmer, who plays the unscrupulous executive producer of a “Bachelor”-inspired reality TV show, earned a surprise win at the Critics Choice Awards for Best Supporting Actress in a Drama, while the show nabbed a nod in the Best Drama race. (The trophy went to “Mr. Robot” instead) “UnReal” was also singled out by the Peabody Awards, along with “Transparent” and “Master of None.”

Lifetime, despite its poor critical reputation, is no stranger to the Emmys. The network’s TV movies have contended in the race before—such as the Thora Birch-starring “Homeless to Harvard: The Liz Murray Story” and 2015’s “Human Trafficking,” with Donald Sutherland and Oscar-winner Mira Sorvino. More recently, Emmy kudos went to the adaptations “Steel Magnolias” (featuring Alfre Woodard and Queen Latifah) and “Flowers in the Attic.” But when it comes to breaking through in the evening’s top categories, the network may find itself empty-handed, especially when facing an awards group that’s been very slow to recognize television shows outside the prestige bubble.

This year, Emmy pundits suggest that the lion’s share of nominations will go to the kinds of shows that the group usually honors: dramas designed in the “Golden Age of TV” template, starring middle-aged white men doing very bad things. This year’s antihero heavy lineup is likely to include Netflix’s “House of Cards,” the “Breaking Bad” spinoff “Better Call Saul,” and Showtime’s “Billions,” the modestly reviewed hedge-fund drama with Paul Giamatti and Damian Lewis. There’s also last year’s winner “Game of Thrones,” which is heavily favored to repeat, and “Mr. Robot,” perhaps that show’s biggest challenger in the race.

What separates “UnReal” from the pack? Why hasn’t it been able to translate critical and industry love (FX president John Landgraf is a proclaimed fan) to probable Emmy cred? That’s because the Emmy Awards have struggled to catch up to the rise of “prestige-ish TV.” Often called “mid-reputable” or “midbrow,” these shows are everywhere: There’s the superhero dramas “Jessica Jones,” “Daredevil,” and “Arrow,” as well as the lighter “Supergirl.” The CW’s meta-telenovela “Jane the Virgin” was left behind at the Emmys last year, and “Crazy Ex-Girlfriend” may repeat its fate this year. Even Fox’s unstoppable phenomenon “Empire” earned a nod for its brightest star, Taraji P. Henson (who plays fan favorite Cookie Lyons), but for not the actual show.

The problem is prestige-ish shows don’t comfortably fit within the confines of what we think the “Golden Age of TV” signifies. Unlike “Mad Men” or “Breaking Bad,” they are situated within specific genres: fantasy-romance (“Outlander”), gothic horror (“Penny Dreadful”), or speculative fiction (“The Man in the High Castle”). They deal with the concerns and lived realities of women (“Getting On”) and people of color (“Scandal”). They also air on networks that are either in the process of breaking into the Emmy game (Starz, USA) or have always been shut out. The CW has never has a show contend in the Comedy or Drama races, despite boasting some of the most critically praised new shows of recent years.

The Emmys have always had this problem. Despite being a beloved favorite during its first five seasons on the air (and two less successful ones), the WB dramedy “Gilmore Girls” never earned a single acting nomination. This was despite the fact that Kelly Bishop (“Bunheads”) and Lauren Graham (“Parenthood”) were doing some of the finest work on television. Graham, in particular, was a standout—a whip-smart comedienne in the vein of Carole Lombard and Rosalind Russell. HBO’s urban crime drama “The Wire,” which had a majority black cast, was similarly left empty-handed, despite being recognized as one of the greatest TV shows of all time.

When FX’s cop drama “The Shield” was snubbed in the Best Drama category during the show’s final season, Salon’s Heather Havrilesky suggested that it was because voters weren’t watching. Had they tuned in, they would have been forced to recognize it brilliance. But the issue isn’t just that these programs are getting ignored but that their successes are treated as a different phenomenon altogether. That kind of thinking, more recently, has led to “Downton Abbey” earning a Drama nod nearly every year it has aired (despite declining quality), while FX’s “The Americans,” considered by many to be the best show on TV right now, has yet to get its due.

It’s television’s version of “Oscar bait,” where a so-so movie is more likely to be up for consideration if it fits the mold of what a contender looks like. The Academy Awards favor inspiring true-life dramas about white male leads (often famous figures) overcoming obstacles in order to achieve success (see: “The Theory of Everything,” “A Beautiful Mind”). Five of the last six Best Picture winners have featured some version of this narrative—whether it’s a former A-lister battling mental illness (“Birdman”), a royal with a speech impediment (“The King’s Speech”), or a silver screen idol facing the end of the silent film era (“The Artist”). Although some of these films were quite good, the model generally favors mediocrity over excellence and the status quo over innovation.

To their credit, the Emmys have attempted—in years past—to rectify its prestige problem by amending their voting system. It has yet to result in the kind of changes the awards, which are defined by stasis, so desperately need. In the past five years, a majority of the shows that compete in the evening’s top categories are simply the same shows that were nominated the previous year: 42 of 62. That’s 67 percent, just over two-thirds. And many of the shows that broke that rule are either freshman entries nominated for the first time or long-running shows that went off the air.

When TV was much smaller, the fact that the same types of shows got recognized over and over again (see: “Frasier” winning five years in a row) was merely the minor peeve of people who even cared about the Emmys to begin with. But today’s landscape has much higher stakes: Last year, there were 406 scripted television shows, and that number will only increase as more players get into the game, whether that’s basic cable networks or streaming services. (Even Apple plans to dip its toes into the original programming market.) When the future of television is continuing to stretch the limits of prestige, it may be time for that bubble to burst.

“UnReal” is the perfect pin to help pop it. Co-created by Marti Noxon (“Buffy the Vampire Slayer), the show is based on the 2013 short film “Sequin Raze.” It was inspired by Sarah Gertrude Shapiro’s seven-year stint as a producer of “The Bachelor.” After the short’s rapturous reception at SXSW, Lifetime expressed fierce interest in making it into a series. The move made perfect sense for a network pushing to rebrand itself in recent years by going meta. From “A Deadly Adoption” (with Kristen Wiig and Will Ferrell) to the James Franco-produced remake of “Mother May I Sleep With Danger?” (featuring lesbian vampires), the Lifetime of 2016 is in on its own joke.

Noxon and Shapiro’s show lampoons the conventions of shows for women through a darkly comic, feminist lens. Appleby plays Rachel, a reality TV producer who is morally conflicted about what she does for a living even while she’s ruthlessly good at it. Rachel is a skilled manipulator with a gift for getting inside the heads of the female contestants on “Everlasting,” the dating show on which she works. In the second season premiere, she has reached the peak of her powers. As the show prepares to crown its first black bachelor, she convinces a Black Lives Matter activist to drop out of school for a spot on the show. Meanwhile, Rachel cons another hopeful into wearing a Confederate Flag bathing suit, knowing it will cause conflict. “We don't solve problems,” Rachel later explains. "We create them and then point cameras at them."

It’s themes are both startlingly of the moment and absurdly entertaining, but what’s made the show so well-received (the recent premiere boasts a strong 87 on Metacritic) is that it feels truly groundbreaking in an era where it would seem there’s little ground left to break. Although television has toyed with female antiheroes before—from “Weeds” to “Orange Is the New Black”—never has a show gone quite as far as “UnReal.” Previously, anti-heroines have been victims of circumstance: Nancy Botwin began the show as a fundamentally good person forced to make hard choices to support her family, a thoroughly relatable conundrum. Even Piper Chapman wants to do good in the world; she’s just too clueless to know how.

But Shapiro said that they weren’t interested in making the show’s dueling anti-heroines, who were written with Walter White and Jesse Pinkman in mind, conventionally likable. “We threw the idea of likability out before we even began,” she told Time magazine. “We don’t subscribe to the idea of likability because we don’t think it’s applied to men.” The second season opens with Rachel and her boss/frenemy Quinn (Zimmer) getting matching tattoos. They read “Money. Dick. Power.” Those three words might be awkward to explain to their grandkids, but they’re a concise ethos for the show’s core themes: “UnReal” deals with the naked pursuit of success and what we must give up to achieve it. When you’ve got ratings to chase, there’s no time to think about morals.

If the Emmys ignore one of the best, sharpest shows on television, voters can’t say they didn’t have the chance to get on board. In January, the show sent out For Your Consideration DVDs—featuring the entire first season—along with a binge-watching care package. If that’s not enough, “UnReal” will also be hosting an Emmy event on a yacht this June, a fete fit for “The Bachelor” itself. Should the Lifetime satire not get the rose it deserves later this month—when voters cast their ballots—it’s the Emmys that deserve to be eliminated.